There’s no denying that Uber engages in some shady practices to grow, and that not all their policies are perfect, both for customers and for drivers. That being said, in just a few years they’ve almost singlehandedly taken on what has historically been one of the most monopolized, protected industries in the world. And that’s incredible.

While there are no doubt good taxi drivers out there, prior to Uber I grew so frustrated by the lack of customer service and sometimes downright rudeness I experienced in cabs. And that’s all sort of history thanks to Uber, given the instant feedback loop.

The battle for Uber is fierce, given the lobbying organizations many taxi companies have. Outside the US the fight against Uber has even gotten violent at times, as we recently saw in Paris. Absolutely disgusting.

However, it looks like London cabbies are taking a different, more lighthearted approach towards attacking Uber. Specifically, comedian Russell Brand seems to have taken on the cause, and uploaded a video a couple of days ago lashing out against Uber. The video is described as follows:

Cabbies livelihoods are under threat from Uber which avoids paying UK taxes. But it’s OK because David Cameron is best mates with Uber’s top brass.

He goes about the video in a cute way, I suppose, and there’s no denying he has some valid points. Like I said, Uber is far from perfect.

But he also makes a lot of silly points. For example, referring to Uber and other multi-national corporations, Brand says “once these people have got us monopolized I have a feeling they’re in this for profits and prices might start going up.”

Well, first of all, they’re already in it for the profits. And second of all, are you really going to complain that Uber is monopolizing things? You mean kind of how the cabbies (who you’re defending) have had it for decades? C’mon now, that doesn’t really hold up. Uber is the solution to a heavily monopolized industry… not the other way around.

Then he complains about surge pricing during the tube strike in London, and about how Uber was charging ridiculous rates. Does anyone like surge pricing? Of course not. But it’s a simple function of supply and demand. UberX drivers aren’t going to be on the roads sitting in bumper to bumper traffic for hours if there’s no surge pricing. That’s just a reality of the Uber business model. Drivers are going to work when they know they can make money, and that’s not during a strike with jammed roads and “regular” pricing.

Meanwhile Russell’s cabbie friend (who seems like a really cool guy) mentions how he had a “human” touch during the strike, and said he told customers “I’ll tell you the fare when we get there.” Sorry, that’s better than (transparent) surge pricing how, exactly?

Of course what this conveniently leaves out is that Uber saves people a lot of money. Just look at the flat rate fares between Heathrow Airport and London: 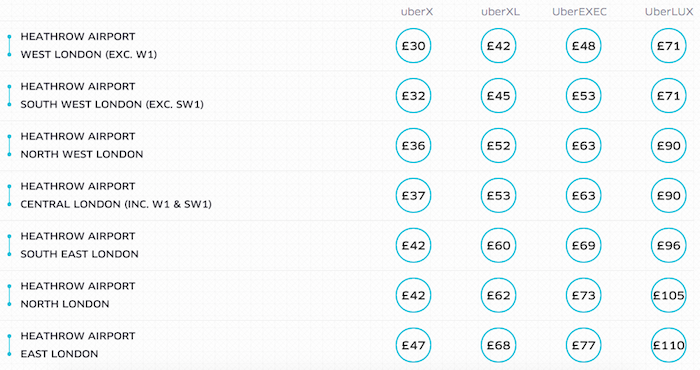 Those are substantially lower than the range of fares charged by taxis, which can be more than double as much: 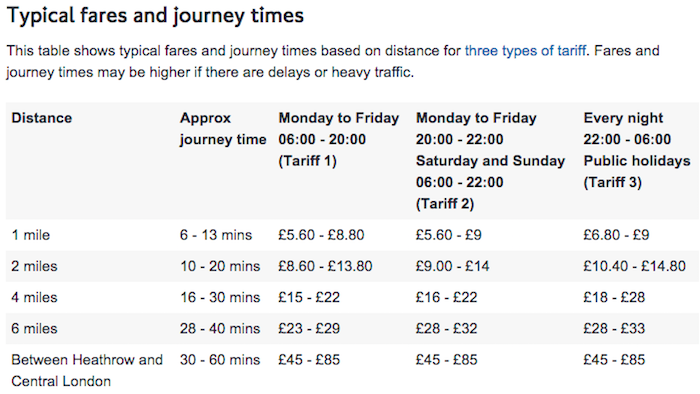 Uber saves people money, and ultimately also lets people earn extra money. Nobody is being forced to work for Uber, and clearly the model is working for drivers, or they wouldn’t participate.

All that being said, if there’s one city in the world where I do feel bad for cabbies in the Uber battle, it’s London. They’re just about the most professional and well trained taxi drivers you’ll find anywhere.

But that doesn’t negate the fact that Uber adds value as well.

What do you make of Russell Brand’s Uber tirade?

(Tip of the hat to TravelSkills)

@Josh Two weeks ago the Singapore MRT (Rail transit) broke down at peak hour. Uber's surge pricing kicked in and went up to as high as 5x. Lots of complaints from commuters who either didn't notice the 5x multiplier (or noticed it but didn't care) the next day.

Economist who works on Uber-related issues here. I'll just say the following: - Uber cars have outrageously strong insurance for passengers, provide by Uber itself. It is not at all "like hitchhiking." - Taxicab drivers are notorious for underpaying taxes. Why do you think they always insist on cash instead of card? It's a bit rich to accuse Uber of being the ones who don't pay tax. - It *is* unfair that Uber does not have to follow many expensive regulations, but the answer is to change the regulations, not to ban Uber. For instance, in Toronto, there is a law that will force all cabs to be handicap accessible. In practice, this means forcing all cabs to be cars that get terrible gas mileage. It is madness. - Complaints about surge pricing strike me as very strange. In the old taxi world, if it was raining at 6pm, the price of a taxi was infinity, since you would never be able to find one. Because of Uber, there are many drivers willing to head out at bar closing time, at rush hours, etc.; this increase in supply is a good thing. - I talk to my Uber driver out of professional interest almost every ride. The huge majority of drivers I get are driving part-time and have another full-time job. There are very, very few options for someone who wants to make an extra $20/hour after expenses working 10 or so hours a week, so that they can pay for school/help save for a house/whatever. From the number of people driving for Uber, clearly there is a ton of demand from workers for these types of opportunities. Since demand for taxis is so much higher during rush hour and Fri/Sat night, it is exactly the sort of industry where part-time workers make the most sense. - On diversity, the number of women and underrepresented minorities I see in Uber cars is much higher than what I have seen in taxis in any city I have ever been to. In many cities, taxi drivers are nearly all men, and moreso are nearly always of the same ethnicity as whoever happens to own a company with a large number of medallions. - If Uber were exactly the same price as taxis, it would still completely dominate because 1) no need to hassle over payment methods ("sorry, sir, card machine not working"), 2) pickup right at the door without waiting outside to find some cab to hail, 3) driving ratings push out the old cars and unsafe drivers very quickly, 4) receipts and route map emailed to you prevent you from being ripped off. Those are four massive improvements in the cab experience even if Uber didn't result in cheaper fares. - As a matter of public policy, cabs driving around looking for fares on the street are unsafe. Uber drivers tend to just sit tight while waiting for a fare, using less gas, causing less traffic, and keeping their eye on the road instead of scanning the sidewalk for a fare. - As for taxis being a monopoly or not, it is an industry with "regulatory capture" not "regulation". Most cities have a very small number of large taxi groups, and the owners of these groups are often politically powerful. Many regulations in the taxi industry have the explicit goal of limiting competition and keeping prices high, not of benefiting the consumer. Given the extent to which the taxi cartels work together, I don't think referring to the industry in many cities as "monopolized" is much of a stretch. And as for Uber's market power in the long run, it is vastly overblown: if Uber tried to jack up fares, people would switch to Lyft or Hailo or whatever other service popped up. In this sense, markets work.

It's hard to imagine life without Uber. Too bad for the cab industry. What value does it add compared to Uber? Taxis just got disintermediated. :) In the Bay Area, there's no need to rent a car, in that Uber takes me to all my appointments without having to worry about directions, traffic and all that. All the Uber trips are often less per day than a rental car, depending upon the location. Put it this way, what do consumers say? Are people abandoning Uber for taxi service? BTW who founded Yellow Cab? Well, it was the same person who founded Hertz, namely the eponymous Sandor Hertz. But this time, Hertz hasn't taken the initiative to reinvent itself in the form of Uber. Hertz has a market cap of $12.5 bn, Uber, $40 bn.