We’ve seen a lot of hypocrisy from U.S. airlines when it comes to their condemnation of the Gulf carriers. For example, the lobbying group of the major U.S. legacy airlines shamed the U.S. Travel Association for working with the Gulf carriers, when one of their member airlines has a partnership with two of the three carriers themselves (American partners with both Etihad and Qatar).

Well, when it comes to hypocrisy regarding the Gulf carriers, I don’t think it gets more obvious than this:

As I wrote about yesterday, President Trump’s proposed budget would eliminate the Essential Air Service program, which is a federal program that guarantees air service to small communities that are otherwise underserved, with subsidies reaching over $250 million per year.

Of course the U.S. airlines love these subsidies, since it means they can turn a profit on some of these routes even when the planes fly empty.

While many will agree that there’s value in this program existing in some markets, other markets are more questionable. As I talked about yesterday, Lancaster Airport has an EAS subsidy, even though it’s just a ~34 mile and ~35 minute drive from Harrisburg Airport. Should taxpayers really be subsidizing that?

The airline unions chime in on the Essential Air Service program

As noted by Live and Let’s Fly, the Association of Flight Attendants (representing flight attendants from major U.S. airlines) chimed in regarding the possibility of the EAS program being eliminated. Here’s what they had to say (bolding mine):

“We are extremely concerned that the [proposed Trump] budget guts the Essential Air Service (EAS) Program. These cuts would harm rural and underserved communities that lack access to a fully-mature transportation system, and rely on subsidized air transportation services or face further economic isolation.”

Meanwhile how do they feel about Emirates’ new flight between Athens and Newark, which is the only year-round nonstop flight between the two countries? Well, they feel a bit differently, as you might expect (bolding mine):

AFA Members, ALPA and other Unions, along with United Airlines management, rallied at Newark Airport to protest the launch of Emirates Airlines flight from Athens to Newark. This route is permissible under the U.S.-Gulf States Open Skies agreements. However, Emirates is only able to enter this obscure market due to enormous subsidies received from the United Arab Emirates (UAE) government, in violation of this same agreement.

The Partnership For Open & Fair Skies recently wrote the following open letter to President Trump, which included the following:

“These subsidies allow carriers like Emirates to fly some of the biggest planes on the planet at the lowest fares, regardless of whether they have enough seats filled to make a profit. It hurts American customers, markets, and most importantly, middle-class workers”

If you take out the words “Emirates” and “biggest planes on the planet,” it sounds a whole lot like the EAS program, no? 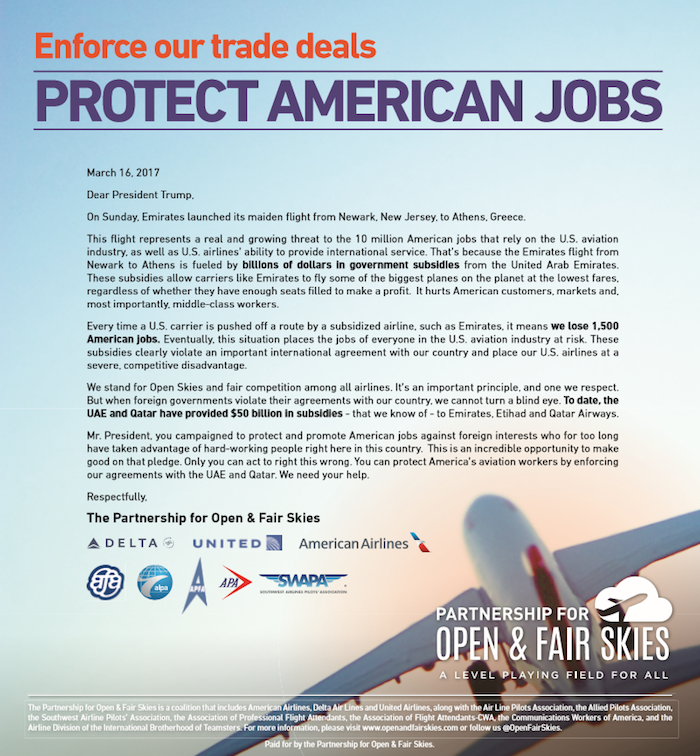 Has anyone blogging flown the ME 3 carriers? I have flown all three, as well as the other US carriers and the other major world airlines. No comparison in terms of quality of service. Every Delta flight I took from Dubai to Atlanta was full; and they can't make money?

@iahphx this is isn't an "ignorant and biased article" , it's a blog post.Lucky can say whatever he likes you nut job, and you are choosing to read and interact with it.We're not reading the NY Times or the Washington Post here.

I find it very weird that all the points bloggers -- who take lots of free "luxury" trips on the Middle East airlines -- are so vehement in their support of those carriers. These are people who, logic would suggest, would be smart enough to see what's problematic about their current strategy. Instead, they make absurd Pravda-like arguments, like the idea that there's anything remotely similar about the often-stupid-but-modest EAS subsidies and the billions being pumped into the Middle East government-owned airlines by their authoritarian rulers. I'm happy to have my travel subsidized by Emirates, Qatar and Etihad, but I know this isn't free fair market competition, and I understand that US airlines and their employees are being harmed when their competitors get to operate economically-insane flights (year-round EWR-ATH will alone lose $25 million/year). Why we keep getting these insanely vehement, ignorant and biased articles by people who should know better astounds me.