Last night I wrote about how United revealed that Oscar Munoz would be making a “historic” announcement today. This was described as a “historic package of new and expanded international routes,” and suffice to say that it led to lots of speculation as to what the additions could be. Well, the wait is over, and we now know.

I’d say it’s not not exciting, but it doesn’t quite live up to the “historic” hype, in my opinion.

San Francisco is already a massive hub for United, as the airline operates dozens of longhaul flights from there. This “historic” announcement is that United will be adding extra routes from San Francisco in 2019, including to:

Okay, truth be told, this is actually sort of anti-climactic. The way I see it:

So yeah, there you have it. No doubt their growth out of SFO over the past few years has been extremely impressive. However, I’d hardly call this particular announcement “historic.”

Details of the new routes

Here’s a chart showing when the schedules and aircraft type for the new routes: 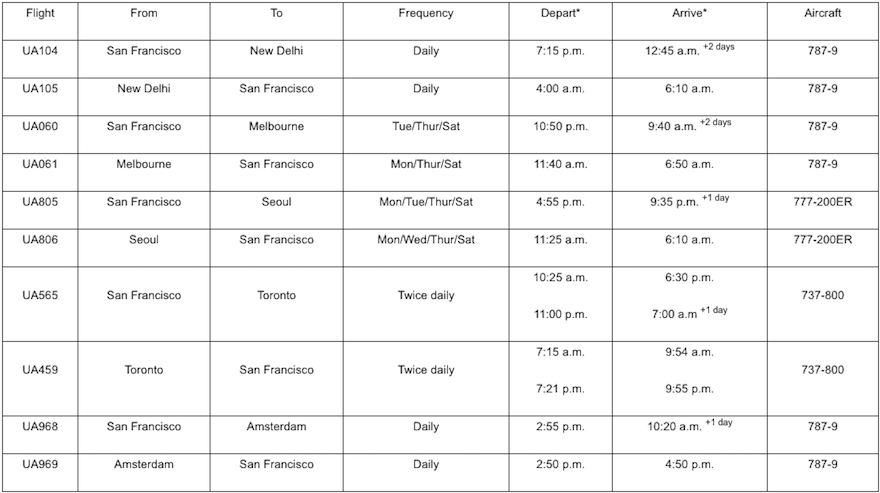 And here’s a chart showing the service that’s being made year-round:

United is adding four new routes, one of which has previously been announced, and all of which are to destinations they already fly to from other hubs. Then they announced additional frequencies on three routes.

What do you make of United’s SFO expansion?

(Tip of the hat to @e_russell)

@Mike Hines The Air India flight is already RTW. It flies Del-SFO over the pacific to take advantage of tailwinds (Incidentally this is the longest flight in the world but doesnt show up on most lists as the lists use the over the pole GC distance) and the SFO-DEL is flown over the pole. Even though the Pacific route is actually longer due to tail winds it takes less time and fuel. UA will probably fly the same route. The AI flight is very expensive sometimes twice as expensive as a 1 stop Cathay or Emirates as its the only nonstop. Now with UA in the picture the fares might moderate.