In this post I wanted to lay out the arguments on both sides, share my take on tipping, and share general tips on how much you should tip (if you choose to do so).

The argument for tipping hotel housekeeping

Many people believe that it’s appropriate to tip hotel housekeeping. The logic is as follows:

The argument against tipping hotel housekeeping

Many people believe that it’s not necessary to tip hotel housekeeping. The logic is as follows:

My stance on tipping hotel housekeeping

Personally I very much believe in tipping hotel housekeeping, at least in the United States, which has a general culture of tipping for good customer service (I don’t find it as necessary in other countries, where housekeepers may earn fairer wages, but I play it by ear).

Now, just to be clear:

I believe in the “live and let live” ideology, so if I have cash on me, I always try to leave a few dollars per day for some of the hardest working people in a hotel. I’m fortunate that a few dollars won’t make a material difference in my financial situation, while I know it can go a long way for many of the people working in hotels.

I also think that housekeepers get the short end of the straw of our tipping culture. Whether you like it or not, in the United States there’s an expectation that you tip a taxi driver just for doing their job without them providing any sort of extra service for you. If they should get a tip for not going out of their way, those who work as hard as housekeepers should as well, in my opinion.

Now, I have to admit, I’m not perfect about tipping. I tip hotel housekeeping whenever I can, but the issue is that I sometimes don’t have any cash on me, which can make it hard to tip.

A 2017 New York Times story that interviewed hotel housekeepers indicated that about 30% of guests tipped. I’m not sure if that number has changed as a result of the pandemic, but that’s one of the few concrete numbers I’ve seen regarding tipping.

On the one hand, it’s my understanding that hotel guests have started to tip more during the pandemic. On the other hand, housekeeping services have been drastically cut back, decreasing the opportunities for housekeepers to be tipped.

One thing is for sure — tipping is the exception, rather than the norm. As one housekeeper described it, sometimes they’ll go days without receiving a tip, and even a $2-3 tip makes them happy, because it means someone appreciates what they’re doing and thought about them.

Over the years we’ve seen some hotels introduce initiatives to try to encourage tipping, either directly or indirectly. For example, several years back Marriott had envelopes with the housekeeper’s name, intended for leaving a tip. These ended up being discontinued, as guests apparently found them to be tacky.

Other hotels have subtly introduced other initiatives to at least let you know who cleaned your room. For example, some hotels have “thank you” notes that the housekeeper leaves with their name on them. Presumably it’s intended to remind you that there’s a real human cleaning your room.

How much should you tip hotel housekeeping?

Personally I generally leave around $5 per night when I have it (I tip on the higher end of the scale because I often don’t have cash to tip, so hopefully that at least partly makes up for the times that I don’t tip). I’ll also tip a bit extra if the room is especially messy (though that doesn’t happen often).

Tipping hotel housekeeping can be a surprisingly controversial topic. I see both sides — ideally housekeepers would be paid good wages so that I wouldn’t feel like I needed to subsidize them. At the same time, they’re generally not paid particularly well, they work really hard, they deal with disgusting situations, and they draw the short end of the tipping stick because they’re “out of sight.”

Personally I think it’s appropriate to tip $3-5 per night for hotel housekeeping when you have cash on you. And if you tip, make sure you make it obvious that it’s a tip, and not that it’s just money lying around. That being said, tipping hotel housekeeping isn’t expected, in the sense that a majority of people don’t tip.

Where do you stand on tipping hotel housekeepers?

Submitting...
Featured Comments Load all 154 comments Most helpful comments ( as chosen by the OMAAT community ).

As a former housekeeping manager (in NYC) it breaks my heart to see how many people don't tip. I can speak from experience and most of the staff are immigrant women with very little education. As a result the only job they can find to make sure they can also raise a family is in housekeeping because of the hours. I am a long time reader and I am assuming the demographics in this blog are most males with college degrees making at least 6 figures a year. There are a lot of other back breaking jobs and all these workers should be tipped. I can spend days debating about fair wages, big corporations and tipping culture, but tipping a housekeeper can make a difference. Maybe $30-$40 a day can help her to pay her light bill or to buy school supplies for her kids or to order a pizza for dinner after a long shift. Think about it....To put a smile on someones face sometimes it doesn't cost much.

Ben, you are a good person, and this post is right on. As travelers, we can't do anything about the low wages of the people we encounter along the way. But tipping a housekeeper, who are often among the working poor, is one way to show a stranger that they matter and their work is appreciated. It's not required, but it's a great opportunity to show a little charity. I typically leave a thank you note and $10-20 per day because that amount means very little to me but can make a big impact.

Your desire to tip shouldn’t come at the expense of the feelings of the people you are trying to tip. In Japan, tipping is rude, because you are not paying the amount set by the provider. If you must provide something, a gift is more appropriate and will be more well-received.

20
The 27 Credit Cards In My Wallet Right Now 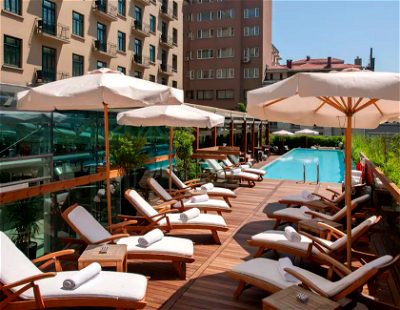