I think we all recognize that demand for air travel has fallen greatly in the past few weeks as a result of the coronavirus situation (both directly, and due to the uncertainty created by it).

US airline stock prices have plummeted, and we’ve also seen US airlines start to issue increasingly generous travel waivers as a way of getting people to feel comfortable booking flights.

Drop in demand comparable to after 9/11?

I’m sure I’m not alone in wondering just how much demand has fallen, particularly in the US market. Well, Southwest Airlines CEO Gary Kelly was on CNBC today and gave us a good indication of just how bad things are.

Kelly noted that Southwest is a 97% domestic airline, and the drop-off in domestic travel “has a 9/11 like feel.” WOW.

"We're 97% domestic, so what we're seeing is a drop-off in DOMESTIC travel," says Southwest Airlines CEO Gary Kelly on @CNBC just now. "It has a 9/11-like feel." $LUV @Lebeaucarnews #covid19

Let’s keep in mind that Southwest is an airline that has no change or cancelation fees ever, so in theory people should feel most comfortable booking with them even in times of uncertainty.

If an airline like Southwest, which is overwhelmingly domestic, says the impact is this bad, then I can only imagine how bad it is for the carriers that rely largely on their international networks.

Are consumers back in the driver’s seat?

The “big three” US airlines have gotten away with a lot in the past several years. There hasn’t been that much competition, and they’ve been able to make lots of negative changes without repercussions, especially to their frequent flyer programs.

We’ve seen them constantly increase spending requirements for status, all while reducing benefits.

Ultimately no one knows the full impact that the coronavirus situation will have on the economy, or on the demand for travel. Is the fear peaking now, or will things get worse? Will this become a thing going forward, just like the flu, and if so, how long will it take for things to return to normal?

Regardless, I think it’s safe to say that both during this time and as demand starts to pick up again, it’ll be up to airlines to once again court customers, rather than just taking them for granted.

Loyalty program executives: put on your thinking caps in the coming weeks and months, because the autopilot on which these programs have largely been run won’t cut it anymore.

Ultimately we don’t know exactly how much demand has fallen across airlines, though I wouldn’t take it lightly when Southwest’s CEO compares the drop in demand to after 9/11. That’s especially true when you consider Southwest is primarily domestic, and it’s international flights that are presumably being hit the hardest.

I certainly don’t want to get ahead of myself, though down the road I can’t help but wonder if the era of guaranteed-multi-billion-dollar-profits-even-with-no-effort for the major US airlines is over…

If demand has dropped off the same way it did after 9/11, will we similar financial issues for US airlines? Admittedly they’re in a better position than they were a couple of decades ago, but…

Flew on Sunday out of DAL. Line at security was non existent at 9:30 am, but at the gates all full. Our flight to MSY was completely sold out. And MSY new airport was crazy busy. This is not 9/11 like.

Well, I just had the best sleep possible on my recent NRT-SFO United flight. I was in economy with 4 seats to myself on a 777. I had more room for my feet than up in business class (not cramped in the tiny cubby hole they call business). In fact I would say all the economy passengers were horizontal for this flight. It was wonderful and reminded of flying TPAC routes of the past. I also flew HKG-NRT on ANA's 767 and I counted 23 passengers. It's a wonderful time to fly.

@Shauna: Choosing to 'dine' at KFC, Popeyes, McDonalds et al, is a choice one makes. Contracting the Coronavirus is not. 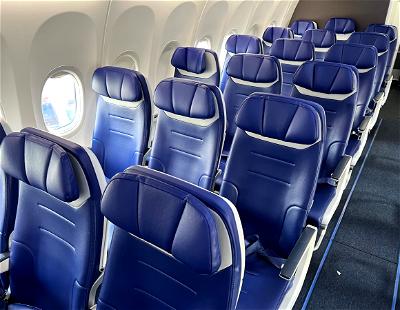