In September 2021, Virgin Atlantic revealed a unique new onboard lounge concept on a subfleet of Airbus A350s. The first plane with this feature is now flying, and we’ve also learned about some of the unique experiences that will be offered here, ranging from a wine tasting to card games.

In the long run Virgin Atlantic’s flagship aircraft will be the Airbus A350-1000. The airline has a total of 12 of these on order, and the London-based carrier has already taken delivery of eight of these planes.

The first seven A350-1000s that Virgin Atlantic took delivery of feature a total of 335 seats, including:

The most recent Airbus A350-1000 that Virgin Atlantic took delivery of featured an all new configuration, intended for leisure routes. Virgin Atlantic’s remaining A350 deliveries will feature a total of 407 seats, including:

To be clear, this new configuration has nothing to do with coronavirus, and potentially reduced business demand. Rather these two different configurations had been planned all along, as Virgin Atlantic had similarly split up its 747 fleet (which has now been retired) — some 747s featured 44 business class seats, while others had just 14 seats.

Virgin Atlantic is known for long having social spaces on its planes. In the past, the carrier’s fleet consistently featured a (small) onboard bar.

Then with the introduction of the A350, Virgin Atlantic introduced “The Loft,” intended as a gathering place for business class passengers. While not a bar, the idea is that you could have drinks here, chat with fellow passengers, etc. This is located right at door two, behind business class.

With Virgin Atlantic’s new A350s, the concept isn’t as practical:

Therefore Virgin Atlantic is introducing a new concept on leisure A350s, known as “The Booth.” Rather than having a full lounge, the leisure A350s instead have a small area with a single table and two seats, so travelers can hang out together. This area features two 27″ touch screens, along with bluetooth audio connections, should passengers want to watch something there.

For those wondering, “The Booth” is located at the forward left door, where you might otherwise usually find a bathroom.

With “The Booth” now officially being offered on flights between London and Orlando, Virgin Atlantic has revealed some unique experiences that passengers can have in this space, designed specifically with leisure customers in mind.

What should passengers expect?

Virgin Atlantic’s first leisure oriented Airbus A350 has just entered service between London and Orlando. The plane features a significantly smaller business class cabin (and a significantly larger economy cabin), and as a result, the airline is also changing up its onboard lounge concept.

Rather than having “The Loft,” the airline will instead have “The Booth,” a smaller space that can seat just two people. This makes sense, both given the logistics of the location of the Upper Class cabin, as well as how few seats there are. Virgin Atlantic has curated some cool experiences for this space, including a wine tasting, cognac tasting, private dinner space, and the ability to play cards here.

Personally I think the execution of this concept is pretty awesome. Currently “The Loft” is simply a social space with no real concept beyond that, while “The Booth” is great for people traveling together to dine face-to-face, which otherwise isn’t possible in Virgin Atlantic’s A350 Upper Class.

What do you make of Virgin Atlantic’s new “The Booth” concept?

There was a trade notice about the use of The Booth last year and Upper Passengers will be able to book a time slot with the crew during there pre departure meet and greet.

If the FAs treat this anything like the bar on most of their fleet (A3X0s and 787s), it'll just become a staging area for small service items. I can count on one finger the number of times the bar has actually been available for legit bar service - out of about 9 flights in recent, pre-pandemic history. And really, that's okay by me. The Booth looks like it's ultimately uncomfortable for more than one person anyway and I've never felt the need to congregate with other pax, even ones I'm traveling with, that can't be done by just standing in the aisle to have a quick chat. Plus, I've never had an issue with service on any of my flights by simply remaining in my seat. I appreciate that they're trying to differentiate, but I really feel the lavatory is more of a necessity then this gimick.

Back in the early days of the 747, PanAm offered the upstairs as a dining room for first class passengers. It was very pleasant to go upstairs for dinner. With a drink or two, this ended up with most of the Heathrow to Kennedy flight being spent upstairs, while the allotted first class seat, downstairs, was unoccupied. This could be very pleasant for first class passengers, but it did not seem to be a cost effective way of monetizing available passenger space. 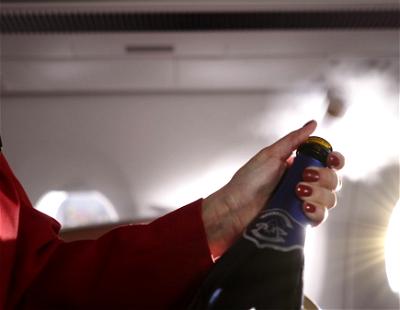