Benjamin is taking me on another amazing trip to countries I’ve always wanted to see (I still wish to visit India someday)! This time, on the Airbus A380. I’m so humbled and excited to spend at least two weeks with him. Thank you, lovebug, for putting up with me for so long.

It all started at the gate in Dallas watching the crew board the Airbus A380. They looked so professional wearing their red hats and beige scarfs, smiling all over their faces with good posture. 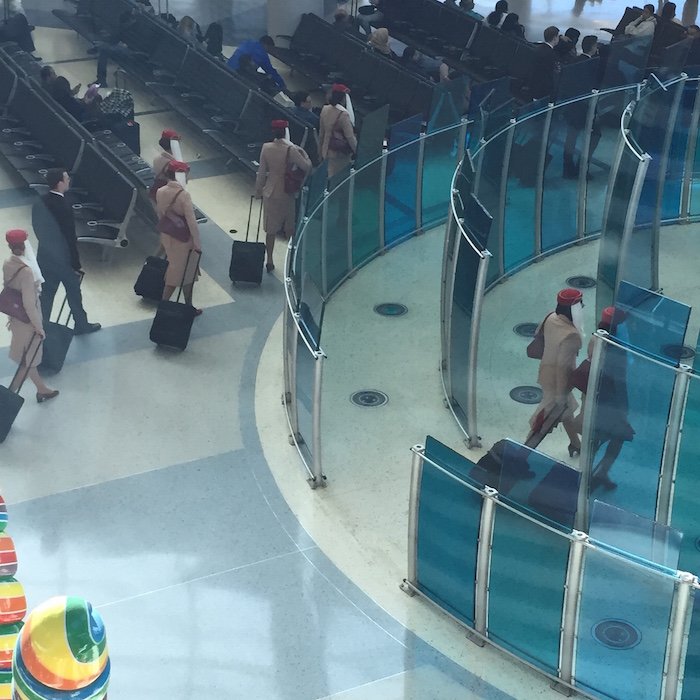 Once I entered the first class cabin I was flabbergasted. The glamor, color variation, chic and shine, made me speechless. The cabin seemed bigger, too, which I believe is due to the flat overhead compartments. 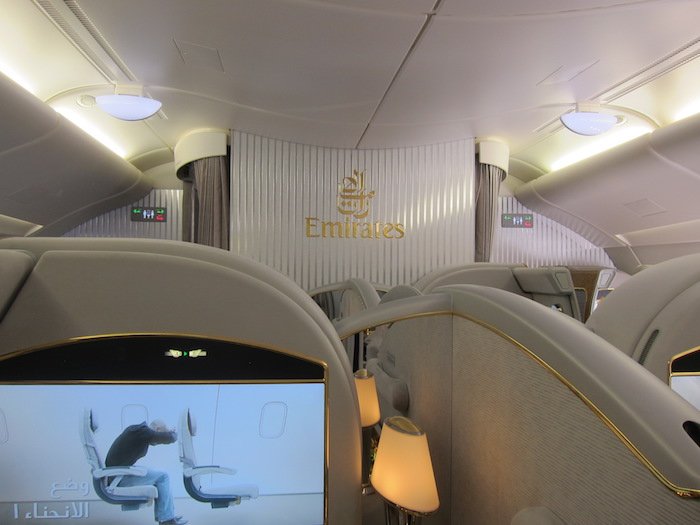 Once I took my seat I was stunned by the amount of personal space I had. The glittering interior almost made me feel uncomfortable at first, but became soothing after a while (especially once the “stars” lit up the ceiling). The Dom Perignon was just the right drink to start that beautiful journey. The flight was very smooth with virtually no noise from the engines, and we were lucky to have only one other passenger in first class.

The service was good but not amazing. The flight attendant serving my aisle did not smile nor did she go above and beyond in any way. She must have had her period, I thought.

After a few more glasses of Dom and some caviar I took a shower at 38,000 feet. How amazing! The room was bigger than my bathroom at home. The floor was heated, and there were more toiletries than I needed. 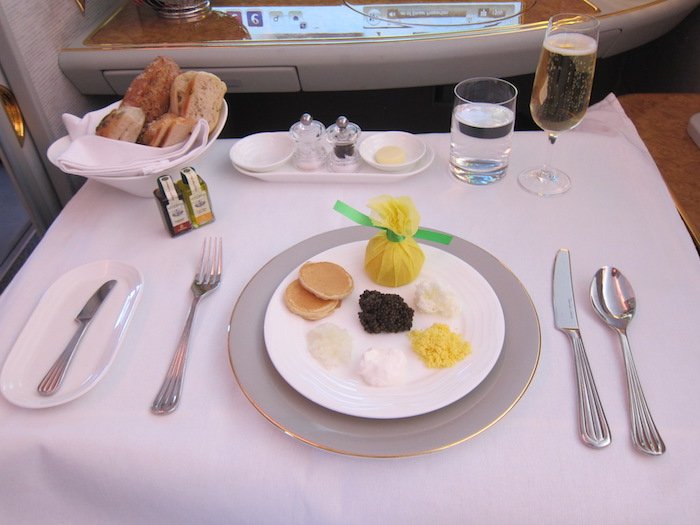 I really felt like I was on top of the world.

I tried to space the five minutes of water out as much as I could so I could get the most out of it. It was just amazing. 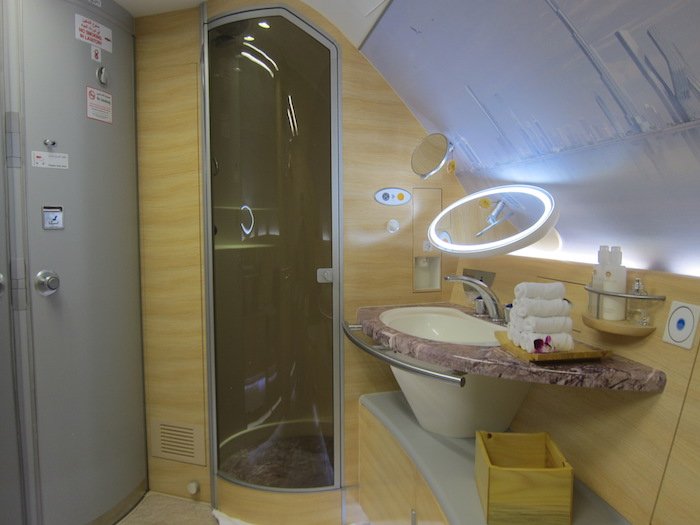 We had some more champagne and a few appetizers, and then went to the bar. We asked the bartender what drinks she would recommend. We had two espresso martinis, which were delicious. 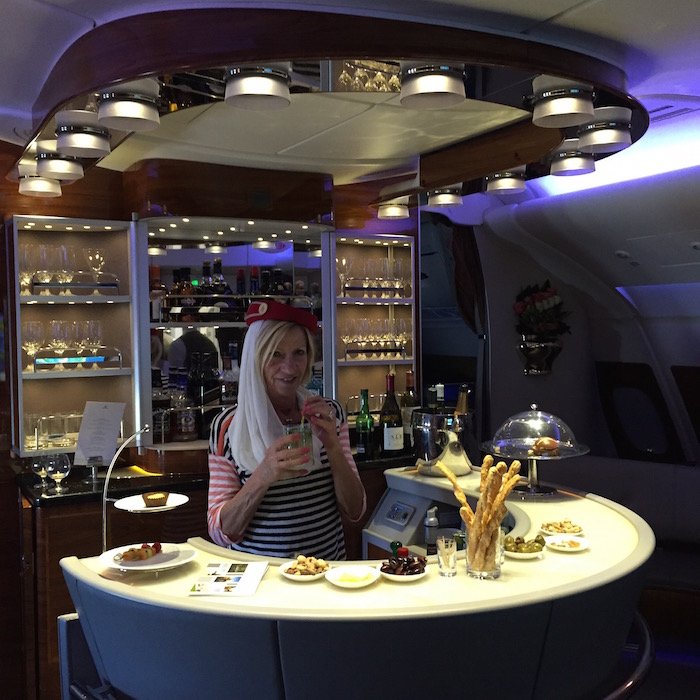 I also tried the Hennessy Paradis, which my husband recommended. He is right, it is an outstanding cognac, but for me too strong. I still wanted to enjoy the flight, after all.

The person serving us at the bar was outstanding. She was very outgoing, professional, and smiled nonstop. I could tell she enjoyed her job.

After napping for a few hours we only had two hours to go to Dubai, and the crew asked if we wanted something to eat. While I wanted to take advantage of the dozens of the things on the menu I hadn’t tried, I was just too full.

To get a bit of exercise I walked around the cabin again before landing and counted just how few people there were. Business class seemed to have more flight attendants than passengers. 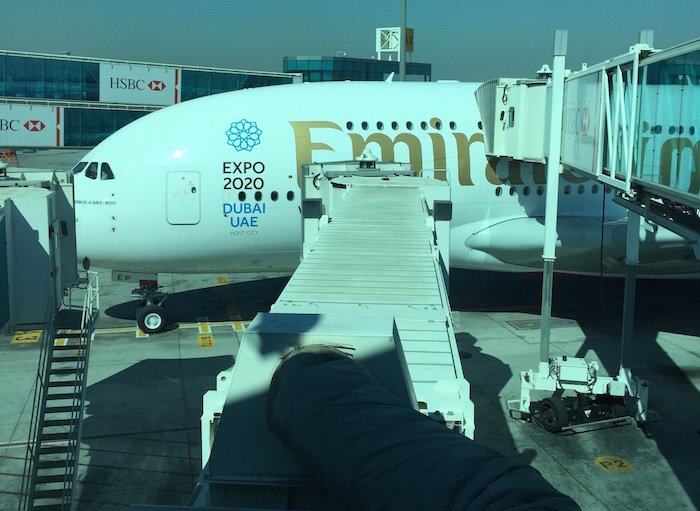 @ Mike -- Sounds like it was just a misinformed agent, unfortunately. There's an issue whereby Alaska award tickets have always shown as staff tickets in their computers, and some outstations just didn't get the memo about that, I guess.

Wife and I just got denied access at MUC lounge today, but they eventually let us in after some sweet-talking. The check-in agent was fine, told me where to go for the lounge, etc., but when we got to the lounge itself, their ticket scanner didn't register our tix automatically, and then they said that Alaska miles tickets don't get access. I was stunned, so I searched online for any similar experiences and just came across this comment above via Google search. Maybe Emirates is taking away more benefits of Alaska miles tickets on Emirates? Chauffer service already; lounge access next? Lucky, some deeper investigation may be needed soon...

Not going to lie, I kinda skimmed the beginning and didn't see it was your mom writing. So the "period" comment threw me, then the "my husband" really threw me. I was about to give my confused congratulations, then I went back to the beginning... Fantastic read, love her voice. 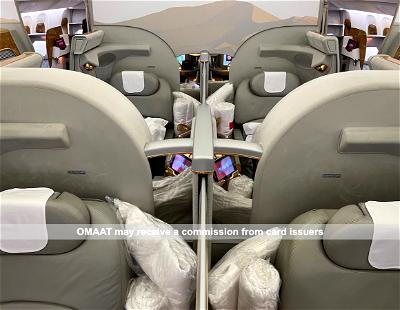