Over the years I’ve seen a countless number of people try to self-upgrade (essentially just taking a business class seat that they didn’t pay for). However, I’ve never witnessed anything quite like what I saw yesterday, which even caused the police to get involved.

The pre-departure self-upgrade attempt (not so bad)

The crew noticed this, and quickly approached him. He first claimed that he needed to move because someone was in his economy seat and there was nowhere for him to sit. When the crew investigated and found his seat was open, he changed his story.

He went back and forth with the crew for a few minutes, and eventually he returned to his seat in economy. I’ve seen situations like this a countless number of times before, so this didn’t really faze me.

About 45 minutes before landing, the same guy from earlier came up to business class, took the seat across from Ford, and just left his two suitcases in the aisle. Like, he didn’t try to put them in a suite or in the overhead bin, but literally just left them blocking the aisle. If you’re going to try to sneak into business class without anyone noticing, that’s probably not the ideal way to do it.

The crew quickly caught on to it being the same person as before, and then the cabin manager, Her, was called. Her was incredibly professional, and he handled the situation in a calm but firm way.

The self-upgrader didn’t take rejection well, though, and started cussing out the crew — “I don’t give a f*ck what you say, I’m not leaving my seat.” Her repeatedly told the man he had to return to his seat, and that this wasn’t negotiable.

At this point Her started moving his bags toward the back of the cabin (in the direction of economy), and then the discussion continued right by my seat. The passenger then once again claimed that his seat in economy was occupied by someone else.

He then changed his story yet again. “I’m having a f*cking panic attack and need to sit in business class.”

The cabin manager continued to stay calm but stood his ground. That didn’t stop the passenger from continuing to cuss him out, and he once again told him to f*ck off.

At this point the cabin manager said “if you don’t go back to your seat right now we will have the police meet the flight.” He responded with “I don’t give a f*ck.”

After a couple more minutes of the cabin manager making it clear this wasn’t optional, the guy returned to economy. Upon arrival, there were four airport police officers waiting on the jet bridge. I unfortunately didn’t see what exactly happened from there, since I got off the plane before he did.

On yesterday’s flight from Doha to Dallas, I saw the most shameless self-upgrader I’ve ever seen. He was verbally abusive toward the crew, and made up baseless lies about his seat being occupied, as if passengers got onboard somewhere over the Atlantic.

Huge kudos to the crew for the professionalism with which they handled the situation. I’m happy they stood their ground in a calm but firm way, and called the police.

Sorry. I would immediately RAT him out to the crew. (Not eat him out!)

The flight attendant’s name was Her, genius.

Maybe learn to read. Her is the name of the cabin manager. 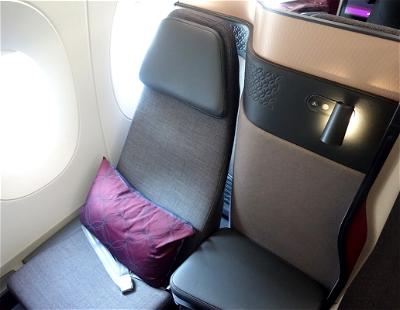