“Americans For Fair Skies” published a story today entitled “He may love points, but Ben Schlappig doesn’t get the point of the Gulf carrier subsidy fight.”

Now, I know exactly what they’re doing here.  They’re going for earned media, because why pay for advertisements when they know I’ll write about it here, and they’ll get publicity from it? And they’re right. I’ll take the bait, because this is just too fun.

What is “Americans For Fair Skies?”

Based on their 2015 tax return, the organization raised about $5.3 million over the course of nine months. They had a budget of $3.2 million over that period — $2.1 million went to advertising, $1 million went to the president’s consulting company (Mr. Moak seems to have quite an incentive to keep this going), and $100,000 to “others.”

Fair Skies has refused to reveal how much of their donations come from “concerned Americans” rather than, ahem, concerned airlines.

It seems to me like the Gulf carriers might not be the only ones that are heavily subsidized by organizations with bottomless pockets around here.

In the interest of full disclosure, I’ve never been paid a single dime from a US carrier or Gulf carrier.

What their response is in reference to

“Americans For Fair Skies” refers to the post I made regarding the self-proclaimed documentary (but more accurately, propaganda piece) that was published a few weeks back. Here it is:

Here’s why they take issue with me

First of all, “Americans For Fair Skies,” I’m happy that the copy & paste function on your computer still works. With how often you recycle the same inaccurate catch phrases, it’s a miracle that the “C” and “V” buttons on your keyboard haven’t worn out.

To summarize their main points here:

Let’s address just a few areas they bring up:

They love pointing out how each route lost to a Gulf carrier costs “1,500 good-paying American jobs”. Out of curiosity, how many routes are they going to claim have been lost to Gulf carriers? Let’s say maybe Newark to Dubai and Atlanta to Dubai? 3,000 jobs maybe, using this logic? 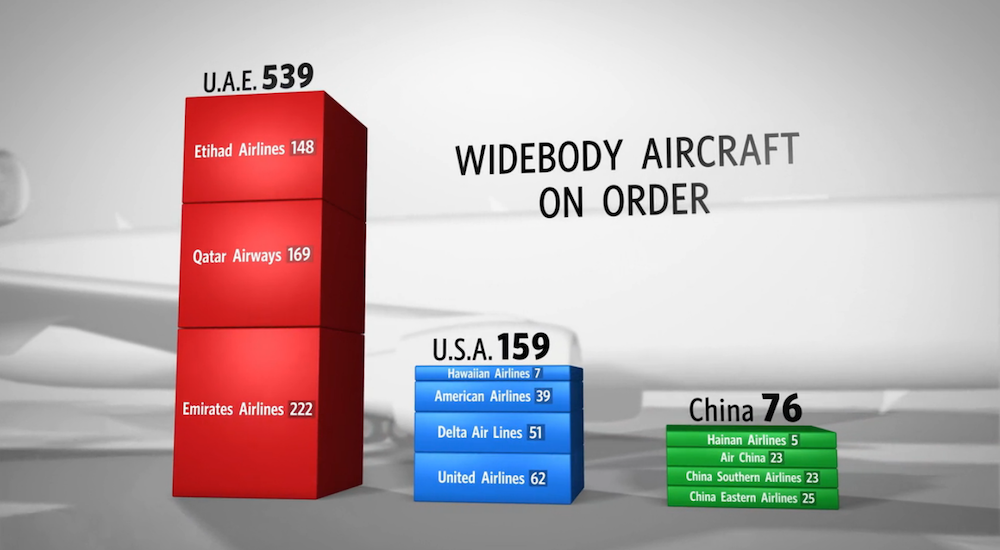 Oh, speaking of the importance of American jobs, how many widebody planes does Delta have on order from Boeing? Z-E-R-O. Not a single one. They do have 49 on order from Airbus though. What happened to the priority being good-paying American jobs?

Since this lobbying group is throwing around some numbers, let’s throw around some numbers from Emirates. According to a study by Campbell-Hill Aviation Group, Emirates supported more than 104,000 American jobs and contributed $21.3 billion in revenue to the US economy, including $10.5 billion to the country’s gross domestic product, and $6.4 billion of labor income in 2015.

While we’re at it, should we talk about how Alaska, Hawaiian, and JetBlue seem quite happy with the partnerships they have with the Gulf carriers? The Gulf carriers are helping them fill seats, and creating good-paying American jobs.

If we don’t take action, the US airline industry is at risk

Show of hands — how many of you are concerned about the US airlines going out of business? Just last week Delta announced their second quarter profit of $1.85 billion, which is a $172 million increase from the same quarter the previous year. That’s despite a $125 million operational disruption.

You know why the US airlines are doing so well? Because they’re charging us for everything, from checked bags to not being miserable (aka basic economy). But you want us to believe that consumers are taking a hit because of Gulf carriers? Really?

The suggestion that domestic routes would disappear due to international routes being discontinued is preposterous as well. Due to the fee environment in the airline industry, airlines are performing perfectly well on domestic routes. The demand for domestic travel isn’t going away, so I think many of us would be perfectly happy seeing some more competitors enter the industry.

Or maybe they’re suggesting that the domestic routes at risk are the government subsidized ones?

US airlines welcome competition and want customers to have a choice

A lot of people seem to accuse me of taking one side or the other. Some suggest I’m overly supportive of the Gulf carriers (and I can see why they’d say that), and some suggest that I’m overly supportive of the US carriers (seriously). I call out the the Gulf carriers when they’re in the wrong, I have a lot of problems with how business is done in the Middle East, and I think Qatar Airways’ CEO is a babbling clown.

Here’s my real issue — I don’t necessarily disagree with the argument that I think the US carriers are really trying to make.

The problem is that they haven’t once actually tried to make that argument. Not a single time. Is this an actual policy issue? If the US carriers really believe that government subisidies in airlines are illegal:

If the US carriers wanted to say “we want to look at the role that government subsidized airlines play in the Open Skies agreement,” I’d support that. I think there would be validity to it.

But that’s not the argument they’re making.

They’re suggesting that US airlines are at risk of going out of business, while the airlines record their biggest profits ever.

They’re suggesting that consumers are losing out because of the Gulf carriers, when in reality we like having the choice, the additional routes they open up, and overall aren’t too pleased with the state of the US airline industry.

They’re suggesting that we won’t be able to get our military where they need to go if the Gulf carriers aren’t stopped.

They’re suggesting that the most important thing is American jobs, while forgetting the hugely positive contributions that the Gulf carriers make to the US economy, including the number of planes that they order from Boeing to fly around the world (while Delta doesn’t have a single widebody plane on order from Boeing).

That’s my challenge to these lobbying groups — stop with the propaganda, and stop with the sensationalism. Give us an actual rational argument and thought to support, and we’re right behind you.

Until then, I’m going to keep calling you guys out on this garbage…

Share
Tweet
Conversations (126)
The comments on this page have not been provided, reviewed, approved or otherwise endorsed by any advertiser, and it is not an advertiser's responsibility to ensure posts and/or questions are answered.
Write a comment
Cancel reply
Report a Comment
Thanks for letting us know!

Submitting...
Featured Comments
View all comments (126)
Write a comment
Most helpful comments ( as chosen by the OMAAT community ).

Oh Lucky! You really are expecting a lot! How can you fight "fake news" and "fake facts" with honesty, integrity and truth? Bravo for a written Blog. Hopefully more people read it and step up and spread the facts as you have. Congrats for having the "kuhonas" to stand up to those who will disseminate garbage to further their own agenda.

I'm surprised the PR firm that's behind this "grassroots group" hasn't flooded this post with negative comments yet- perhaps that is coming.

Terrific presentation of the issues and your position, Ben. Great analysis. Thank you, and Bravo!

94
American Jailed In Dubai For Legally Smoking Marijuana Before Trip