As you guys know I’m presently enroute to the Maldives, and planning my outbound flight was a bit of a last minute ordeal. I had originally asked you guys which option you think I should take on the outbound.

Then I had a schedule conflict come up, which caused me to push back my trip by a day and actually have to choose based on schedule rather than which would make the most interesting story.

So in the end I booked an American AAdvantage 67,500 mile first class award from New York to Colombo.

That meant I just had to find a way to get from Colombo to Male. That’s only roughly an hour-long flight so redeeming Avios seemed like the obvious option, until I looked at the cost. While economy would have cost 4,500 Avios, the taxes and fuel surcharges for the short flight were $90. 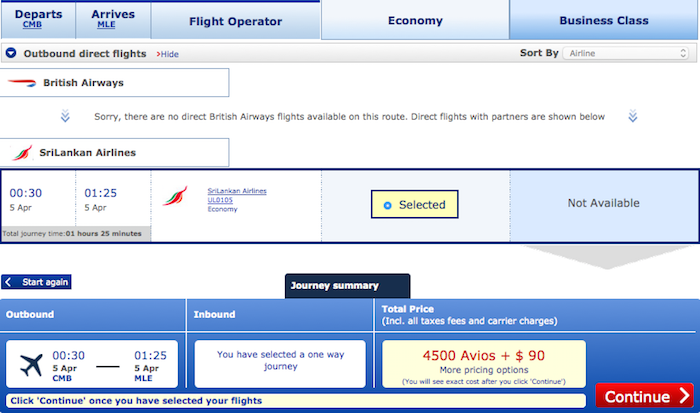 Meanwhile a paid ticket on the flight was $150. I’ll gladly pay $60 to save 4,500 Avios, not to mention the fact that I earn elite qualifying and redeemable miles this way. I did look at the cost of business class, but it was prohibitively expensive — about three times the price of economy. 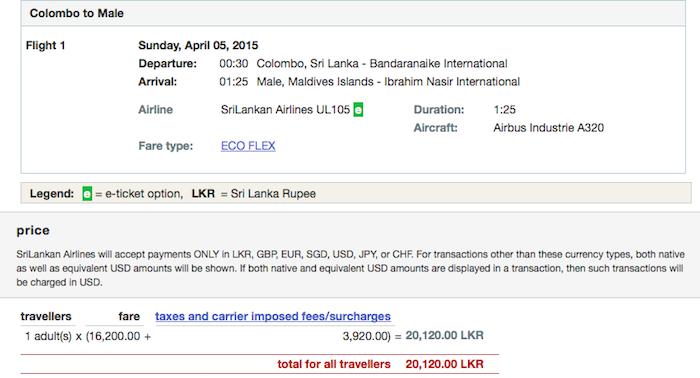 After ticketing I went online to select seats, and something caught my attention. I could bid for a cash upgrade to business class. As a matter of fact, SriLankan seems to offer paid upgrades almost across the board, and even has a website dedicated to it.

Despite my millions of flown miles, I don’t remember the last time I had the opportunity to bid for an upgrade. That’s because virtually all my travel is either:

Even though there was limited value to an upgrade on such a short flight, I thought it would be a good experiment, if nothing else. 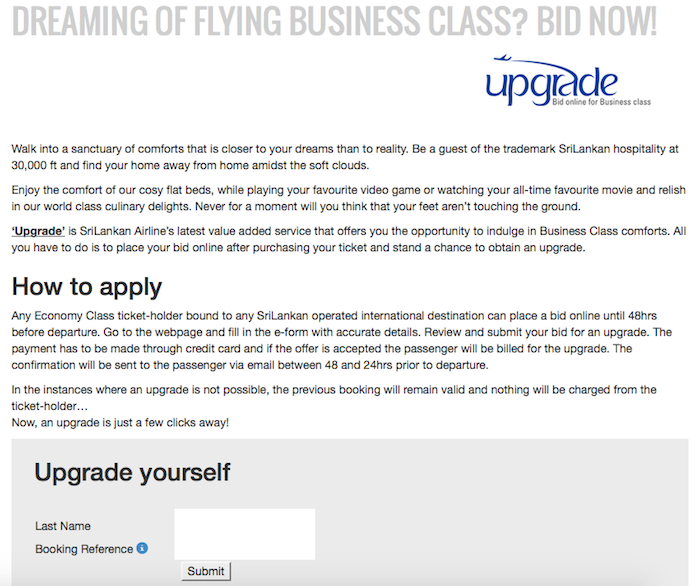 As luck would have it, I made my booking about 50 hours before departure, so literally right before the cutoff.

The upgrade scheme is interesting in that it gives you a range you can bid for the upgrade. In this flight’s case, the range is anywhere from “No Offer” to $250. And there’s an “odometer” of sorts which tells you the strength of your upgrade offer. 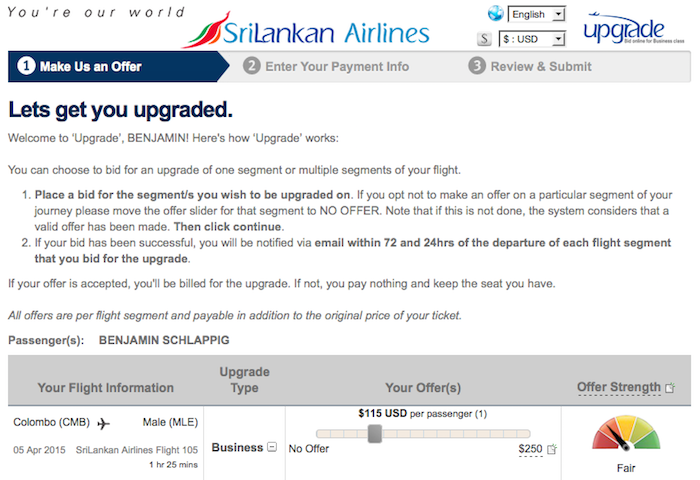 Now, these upgrade costs are actually quite high for a short-haul flight. Based on what I’ve read online, Colombo to Male is miscoded by SriLankan when it comes to paid upgrades, in that they view it as a mid-range flight rather than as a short-haul. So an upgrade on a flight to Kuala Lumpur, for example, might be cheaper than an upgrade to Male.

But I figured I’d give the upgrade a shot in the name of science. Once I entered my $100 bid I was brought to a payment information page, where I had to enter my credit card information and email address. 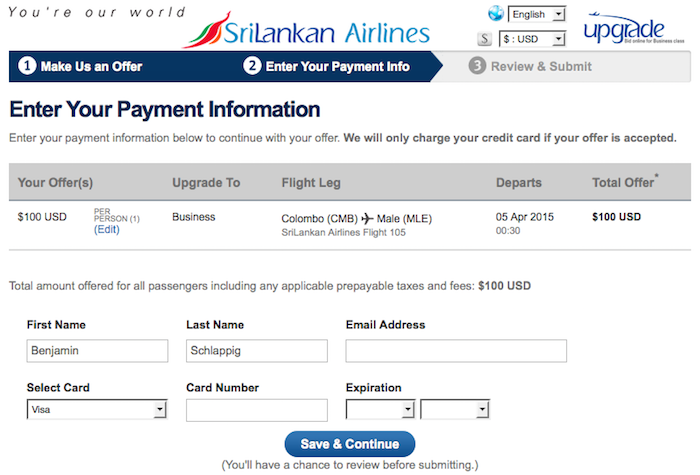 After that I was brought to a page confirming my offer. 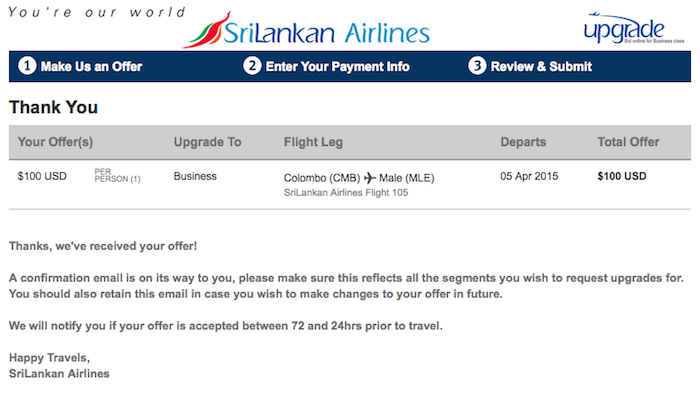 About 36 hours before departure I received an email from SriLankan confirming that my upgrade offer had been accepted.

What’s interesting is that when your upgrade is accepted you’re rebooked in paid business class — “I” class — so you would earn bonus miles based on that new class of service.

Admittedly $100 for an upgrade to SriLankan’s regional Airbus A320 business class on a sub-90 minute flight isn’t the greatest value in the world, but I was keen to finally experience the process of bidding for an upgrade. 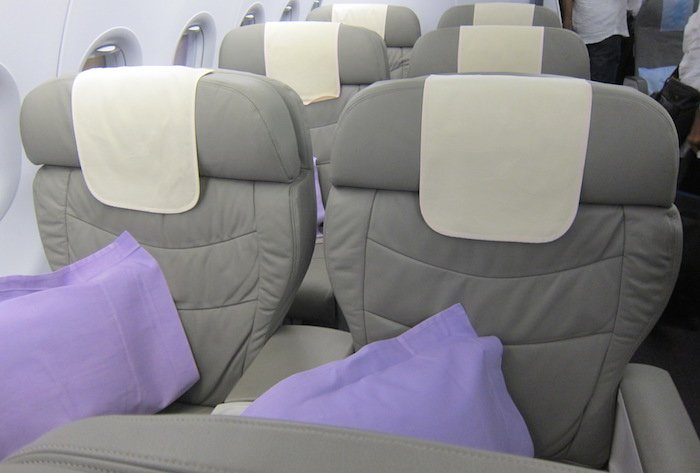 I think paid upgrades on SriLankan have the potential to be really useful. Based on all the routes I’ve searched, SriLankan doesn’t seem to sell very many business class seats at all, so I think upgrading is damn near guaranteed.

This FlyerTalk thread has a lot of data points about upgrade costs on SriLankan, and as you’ll see, most rates are much more reasonable than on this route.

Have you ever done a cash bid for an upgrade on any airline? If so, how was your experience? 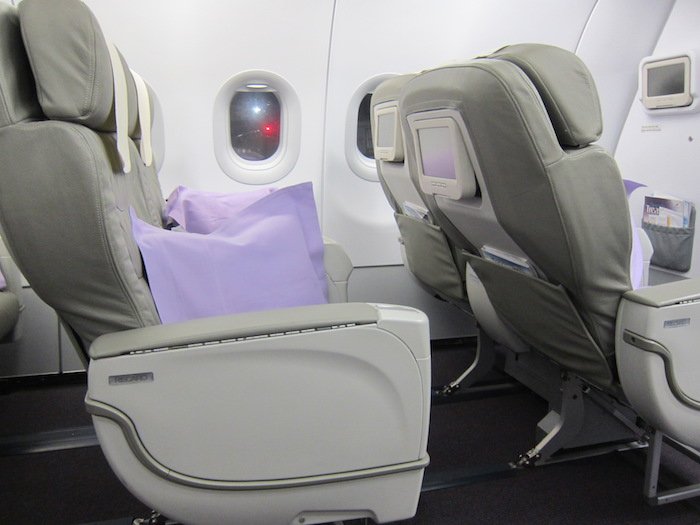 @ Gene -- I value them at substantially more than a penny each.

@ Beachfan -- Yep, with bag fees (if applicable) that could indeed make the cost difference even lower. Not sure I follow what you're asking with date changes? Sorry! 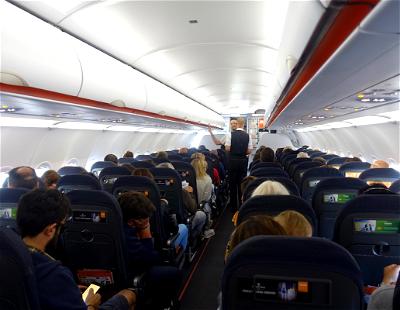 85
PSA: Please Don’t Play Your Guitar & Sing On An Airplane