For as long as I can remember, Hawaiian has been operating widebody aircraft between Hawaii and the mainland. Thy operate a combination of Airbus A330 and Boeing 767 aircraft. In late 2015 they even introduced a new fully flat first class product, which Tiffany reviewed last year.

Well, Hawaiian will be taking delivery of 18 A321neo aircraft between the fourth quarter of 2017 and 2020, which will be operating many of their flights between the west coast and Hawaii.

The A321neo is an updated version of the A321, with updated engines that make it more fuel efficient and give it a longer range. Hawaiian has just revealed the interiors for these new plans, and later this year they’ll reveal the routes on which these planes will be operated.

Hawaiian’s A321neo aircraft will feature a total of 189 seats, including 16 first class seats, 45 extra comfort seats, and 128 economy seats. Here’s how they describe the new interiors:

Guests will enjoy the choice of three cabin products, with intuitive and comfortable seating provided by B/E Aerospace. The Premium Cabin will be luxuriously appointed with leather recliners, thoughtful design details and a custom lighting fixture incorporating Hawaiian’s signature ‘wave’ motif. The 45 Extra Comfort premium economy seats will offer five more inches of legroom, priority boarding and other perks. Seats in all cabins will be equipped with complimentary high-power USB outlets for device charging, while guests in the Premium Cabin and Extra Comfort seats will enjoy access to an additional AC power outlet. Pivoting overhead bins maximize the amount of space available for carry-on luggage.

New to Hawaiian’s guest experience, the A321neo will feature wireless streaming inflight entertainment. Guests will be able to download an application on their personal devices before they board to enjoy a wide selection of complimentary movies, TV shows, and Hawai‘i content available exclusively through the airline’s Hawaiian Skies channel. Holders for personal hand-held devices and tablets will be integrated into the tray tables of the Premium Cabin as well as the first row of Extra Comfort, and built into the backrest of all other seats in the aircraft.

Hawaiian’s A321neo aircraft won’t feature any personal televisions, but rather will have streaming entertainment, which seems to be the way of the future, for better or worse. Personal televisions add weight to the plane (which in turn increases fuel burn) and can malfunction, so nowadays many airlines are instead deciding on streaming inflight entertainment.

What I find interesting here is that Hawaiian’s new A321neo first class is absolutely a step backwards compared to the first class product that they’re presently installing throughout their A330 fleet. Those planes are getting flat beds, while the A321s will have a more standard domestic first class configuration.

The economy cabin looks nice enough, especially given that they have 45 extra legroom seats.

Hawaiian’s A321neo aircraft will be worth avoiding once they’re introduced. Whether in first class or economy, I’d much rather be on an A330. In first class the A330 product is much better, while in economy a 2-4-2 configuration is more comfortable than a 3-3 configuration, in my opinion.

Still, I don’t blame Hawaiian for what they’re doing here — they went with a pretty standard configuration, which makes perfect sense, since they couldn’t really command much of a price premium for their flat bed product to Hawaii. Now they’re more in line with what most of the competition is offering.

We’re Hawaiian Airlines fans...until this month, that is. Just flew round trip SJC/Kona - first time on the new 321 plane. Pretty much the most uncomfortable flight we’ve ever experienced. Leg room non-existent, cramped cabin, narrow center aisle...plus cutbacks on all the little perks that made traveling on HA special. Change isn’t always for the best...

I only fly Hawaiian to the islands for the past 30 yrs, haven't had an issue, flew first class, and economy, personally for such a short haul not worth the extra money for first class. It's only been on the wide body so room hasn't been an issue for me. I'm going back in a couple of months and it looks like my flight home will be on the neo single isle, not looking forward to it as it's a similar configuration of the 737 which is okay for a 2-3 hr flight, seats are not comfortable at all. Will see if this is a trend for Hawaiian and if they plan on replacing all the west coast flights with this skinny plane.

John First class on the new 321neo was miserable. Comparable to the old saying “ like third class on a Bulgarian railroad” Not worth the money 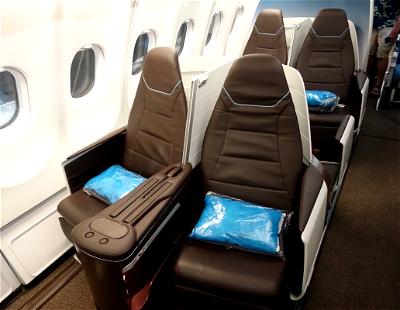