As I wrote about earlier, Ford and I are spending the weekend in Mexico, as we booked a last minute trip.

Well, I think for the first time that I can ever recall, immigration took longer than the flight — our flight time was 82 minutes, and it took about 90 minutes to clear immigration.

Mexico & the US are terrible for airport immigration

In my experience, the US and Mexico are the two all around worst countries when it comes to the airport immigration experience:

For whatever reason I hadn’t really thought of immigration wait times in Cancun until we landed, even though I remember hearing horrible things about them.

That’s probably because it was such a last minute trip, so I didn’t have time to really think of any aspect of it. We booked flights and hotels, packed our bags, and left for the airport.

But when we pulled into our gate at Cancun Airport, I sure felt like I was at Chicago O’Hare, or something, based on the planes. 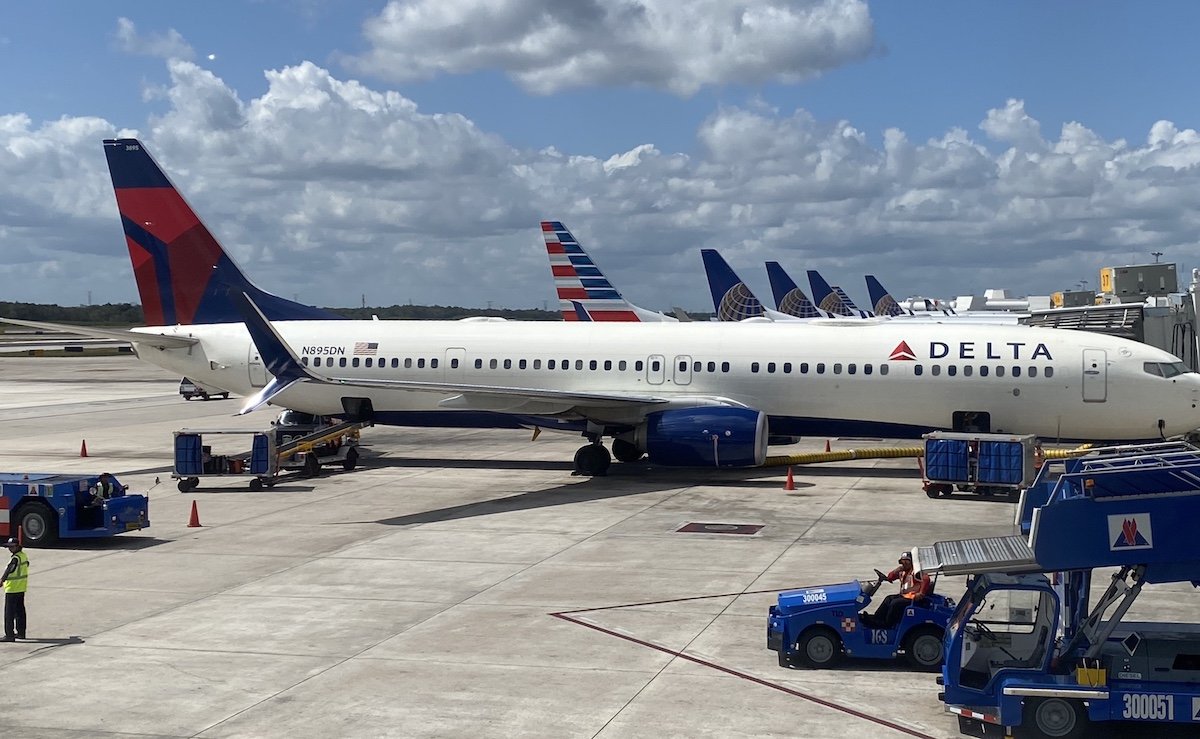 Lineup of airplanes at Cancun Airport

As we exited the plane the situation was even worse than I was expecting. We couldn’t even walk towards the immigration facility, but rather had to walk the other way, as there was a line snaking throughout the entire arrivals facility.

They even had to rearrange the line so that they could clear everyone out of the jet bridge and board the plane back to Miami, because otherwise there just wasn’t enough room. 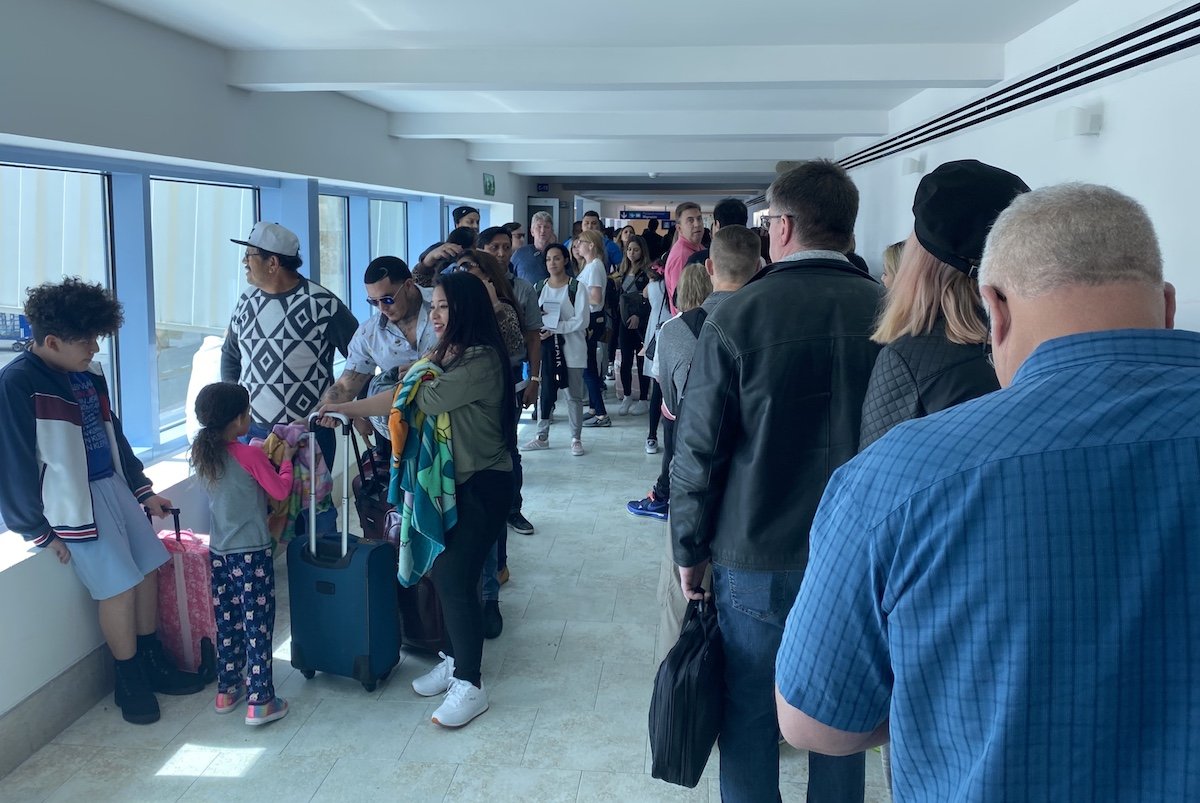 After a while we were in the arrivals facility, where the scene was as bad as you’d expect. 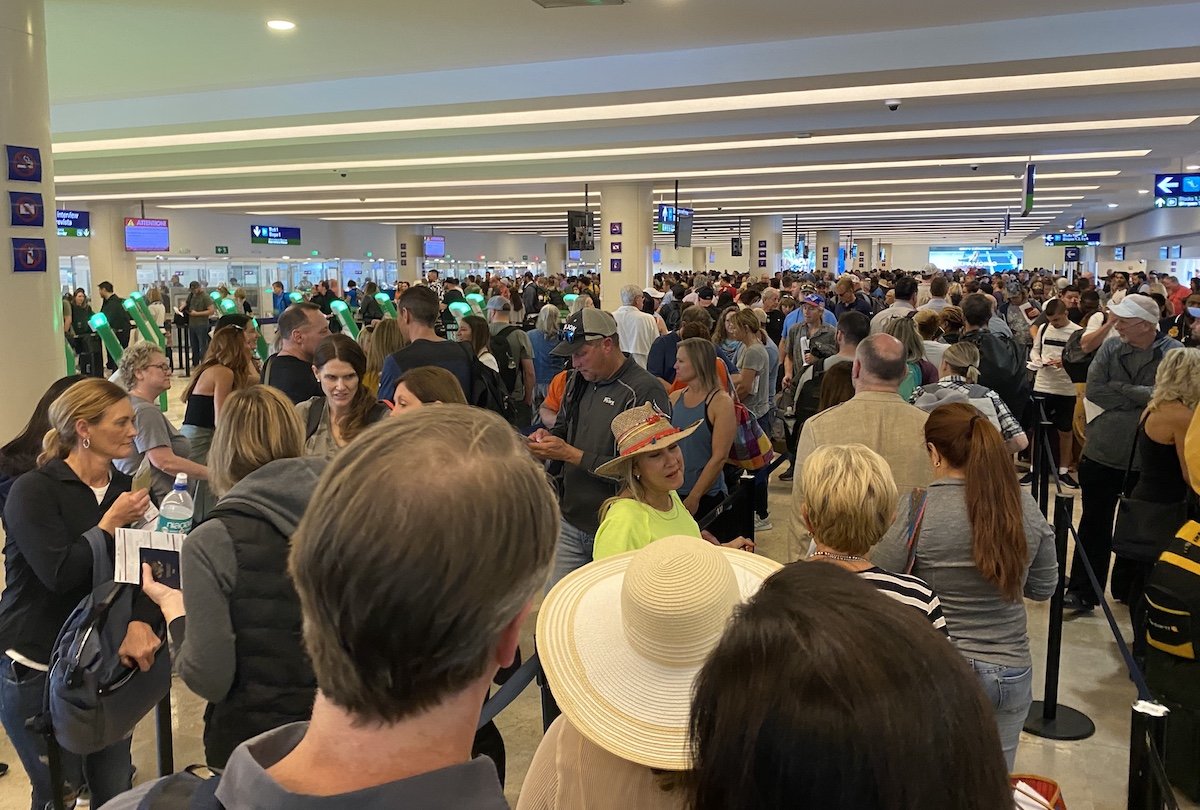 The airport has these pretty automated machines, but they don’t seem to use them. 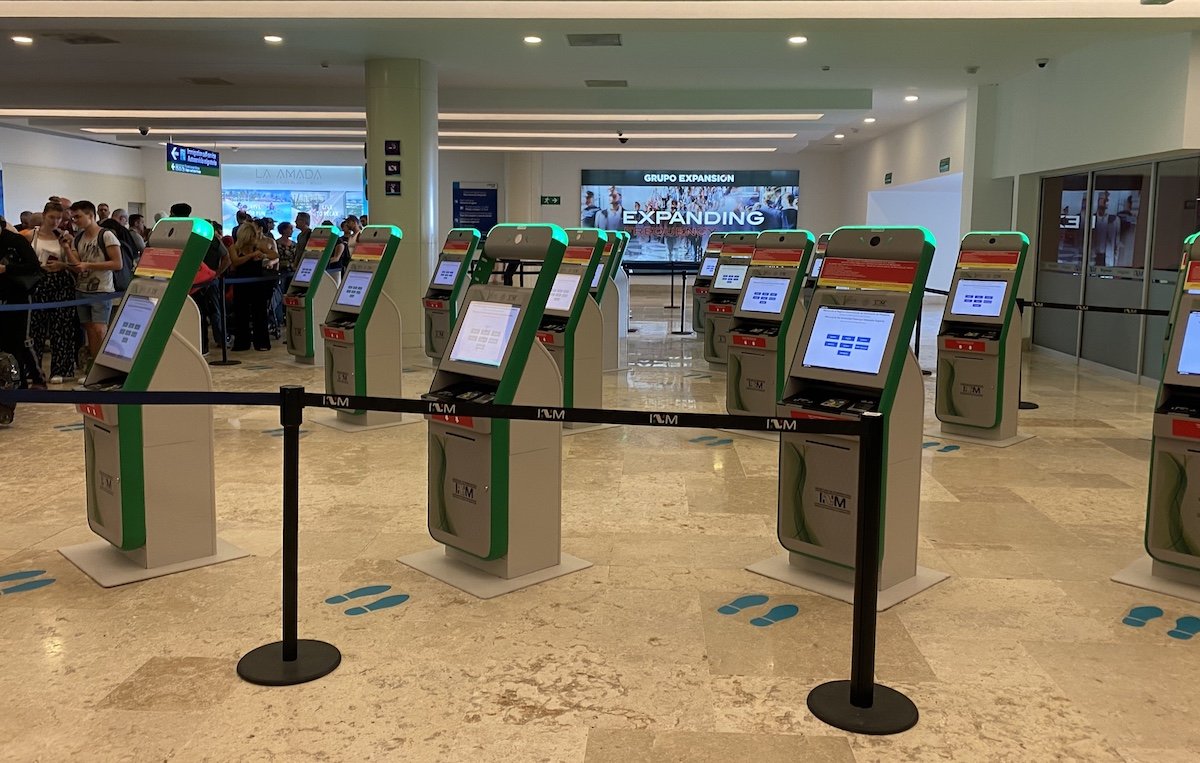 Go figure that the line we were in was intended for 10 different immigration “stations,” but only two of them were staffed (as one would expect in peak season on a Friday afternoon).

Passengers in the arrivals hall were saying the predictable things:

While I don’t necessarily disagree, there’s not really any benefit to taking that viewpoint. Of course I was annoyed, but the way I viewed it:

If you’re flying into Cancun, be ready to be patient. Use the bathroom before your flight lands, and bring bottled water and snacks if you’re hungry. 😉

In the end, immigration took about 90 minutes for us. Frankly given how poorly staffed the facility was, I was shocked it “only” took us 90 minutes to get through.

I’m not sure if we were just unlucky, or if this is normal during peak times. I’ve heard horrible things about Cancun immigration, so I’d guess this wasn’t an isolated incident.

As we waited in line I searched online if there was any immigration arrivals fast track service for the airport. There does seem to be one, but best I could tell it costs 1,000EUR+ for two people. Ouch.

If you’ve flown into Cancun, what was your immigration experience like?

Stumbled across this article; reas the comment below and thought grr that sounds familiar and realized it was me a hear and a half ago. Doh! Well here is how it went: I got to the Cancun airport three hours before my flight to do the enrolment (my flight is from terminal 4 so all of this is with my luggage). I go to terminal 2 enrolment centre. They tell me I need to go to terminal 3. The free shuttle was running every 40 minutes and I had just missed one so I spend 400 pesos on a cab to terminal 3. I go to the VC office in terminal 3. Wait a half hour in line to get to the agent who tells me that I need an appointment. I show her their own website that says no appointment needed but she didn’t seem to care then told me without appointments I should go to terminal 2. I go out and luckily the free shuttle was passing. Take the shuttle to terminal 2. Go back to the VC office to be told the computer system is broken right now so she needs to call someone to fix it. I waited 20 minutes for the “technician” but no one came and I was cutting it close for my own flights check-in so I gave up, got back on the shuttle to my terminal 4 departure. Left Mexico without VC. Total waste of 2 hours and 400 pesos. If there is any good news in this, I spoke with a colleague at the Mexican Embassy in DC who 1) apologized and 2) confirmed that my non-finishing the enrolment process won’t have any prejudice next time I enter Mexico, whether I try to get VC again or not. Good luck to anyone tying to enrol. Maybe Mexico City airport is better? More business travel focused than Cancun?

Thanks for the info. The link took me to a pdf flyer, but I did find their new (at least since my last attempt) website and that appears to be progress, although i had to use Google translate - it wouldn't populate an English option. I have gotten through the application step before (old website) and paid - a few times (!) but the process broke down when I tried to do the in person visit - Cancun, Cabo .... Machines not working, offices closed, never heard of the program .... I will try again when i am back to traveling. I wish you luck!

@Marcy I just signed-up online for VC. Form was easy and bilingual. There was no fee to pay for those who are American with Global Entry and/or Canadian with NEXUS (see flyer https://www.gob.mx/cms/uploads/attachment/file/525979/Triptico_Viajero_Confiable.pdf). I am arriving in CUN on a Saturday and leaving on Thursday so I will try to complete VC registration upon departure before my flight (because IMM office is only open Monday - Friday). I thus won't get to use my (hopefully completed) VC membership this trip, but it will be valid for my next visit. 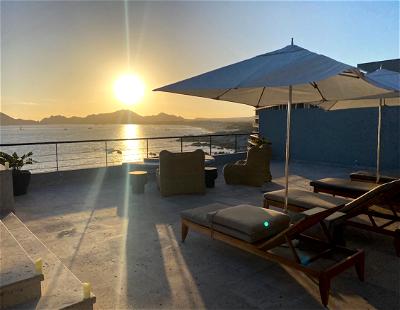