Earlier I published my review of American’s new Flagship Lounge at Miami Airport, which I had access to on account of my oneworld Sapphire status with British Airways. It’s a beautiful new lounge, and a quantum leap compared to the old lounge setup at the airport. Miami Airport has gone from an airport worth avoiding as a premium American passenger to one that’s now very pleasant to pass through.

One of the other unique features of the lounge is that it has a Flagship First Dining facility. American had invited me to attend the opening event for the lounge, though it didn’t fit into my schedule. They were kind enough to extend an invitation to visit it when I next pass through Miami, which is how I had the chance to visit the lounge. So I was “comped” access here, though I did have access to the Flagship Lounge on account of my ticket. While I prefer to review lounges on account of my actual tickets, in this case I had no plans to otherwise pass through Miami soon, so I figured some review was better than none.

I happened to be visiting the lounge the same time as View from the Wing and Pizza in Motion (it’s funny, it wasn’t planned this way), so the three of us ended up eating together.

That’s not a lot of passengers at all, especially for the Miami facility.

American’s first Flagship First Dining facility opened earlier this year at JFK, and I reviewed that in September (I was flying American first class from New York to Los Angeles). Miami’s Flagship First Dining is the second such facility to open. A similar one should open in Los Angeles next month, and then Dallas and London should be getting similar facilities in 2018.

What are the hours for American’s Flagship First Dining Miami?

While the Flagship Lounge is open daily from 4:30AM until 10:30PM, Flagship First Dining is only open from 2PM until 10:30PM. That’s because American really only has three 777-300ERs out of Miami, to Buenos Aires, London, and Sao Paulo. With each plane having eight first class seats, that’s at most 24 passengers flying first class nonstop out of Miami (however, if you’re connecting to international first class same day, that does the trick as well).

It’s located inside the Flagship Lounge near gate D30. If you’re eligible for access you’ll be given an invitation when you enter the lounge, which is a little card that has your flight number and info written on the back of it. 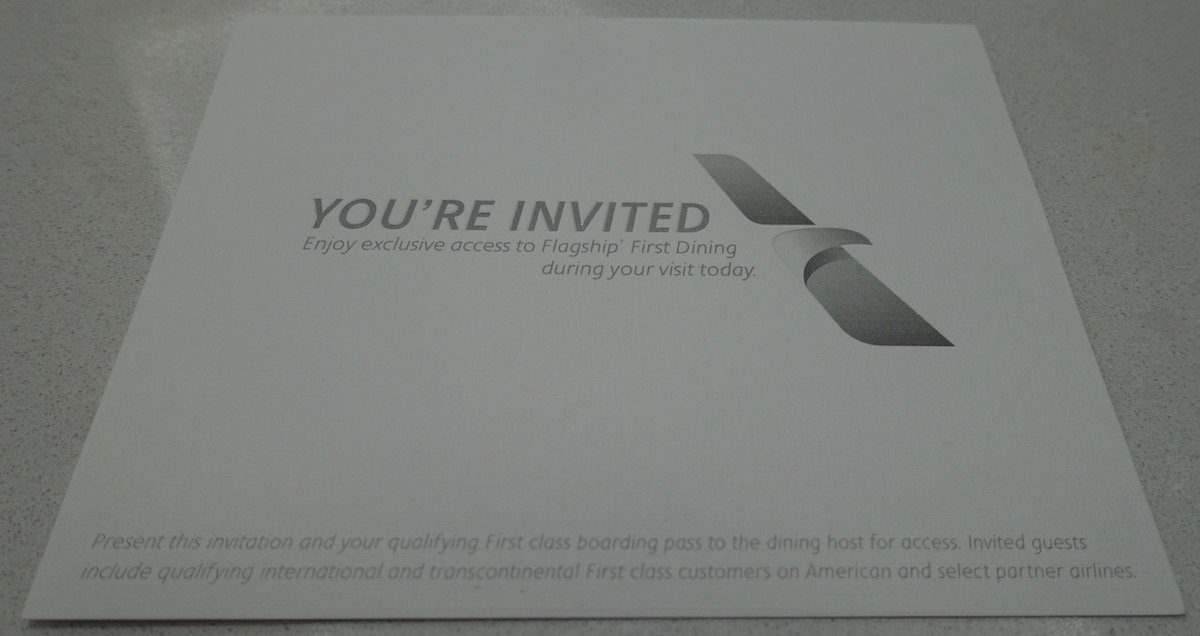 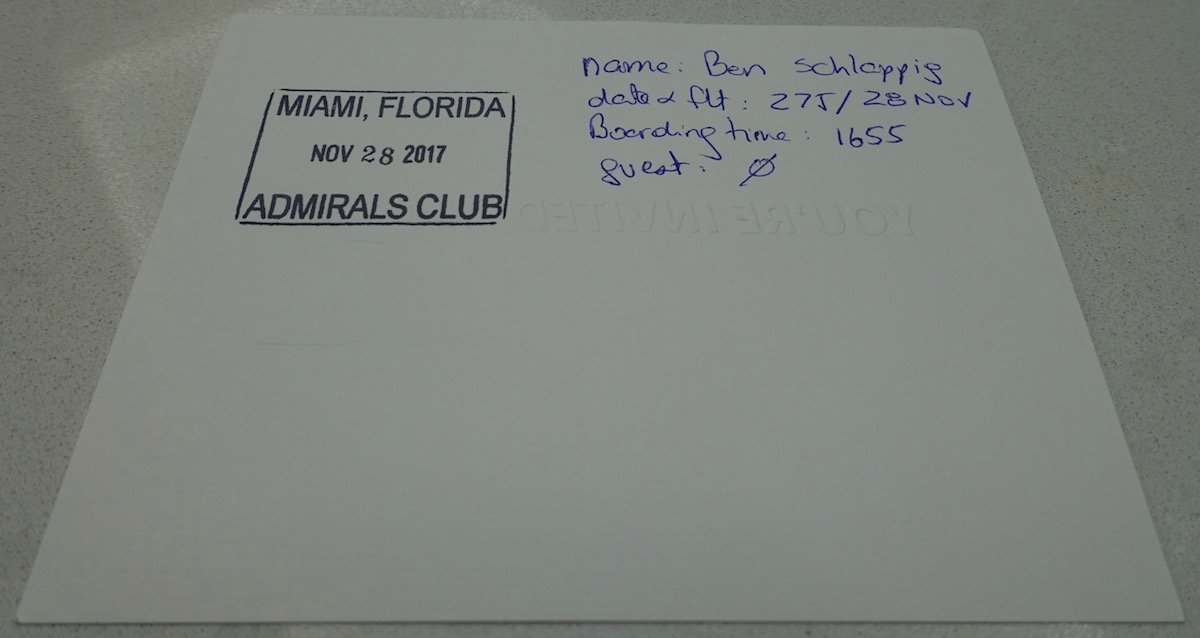 Once you’re in the lounge just walk towards the main dining area, and then on the side you’ll see the door to the Flagship First Dining facility.

Just inside the entrance to the lounge is a host stand, where a friendly guy took our invitations and escorted us to a table. 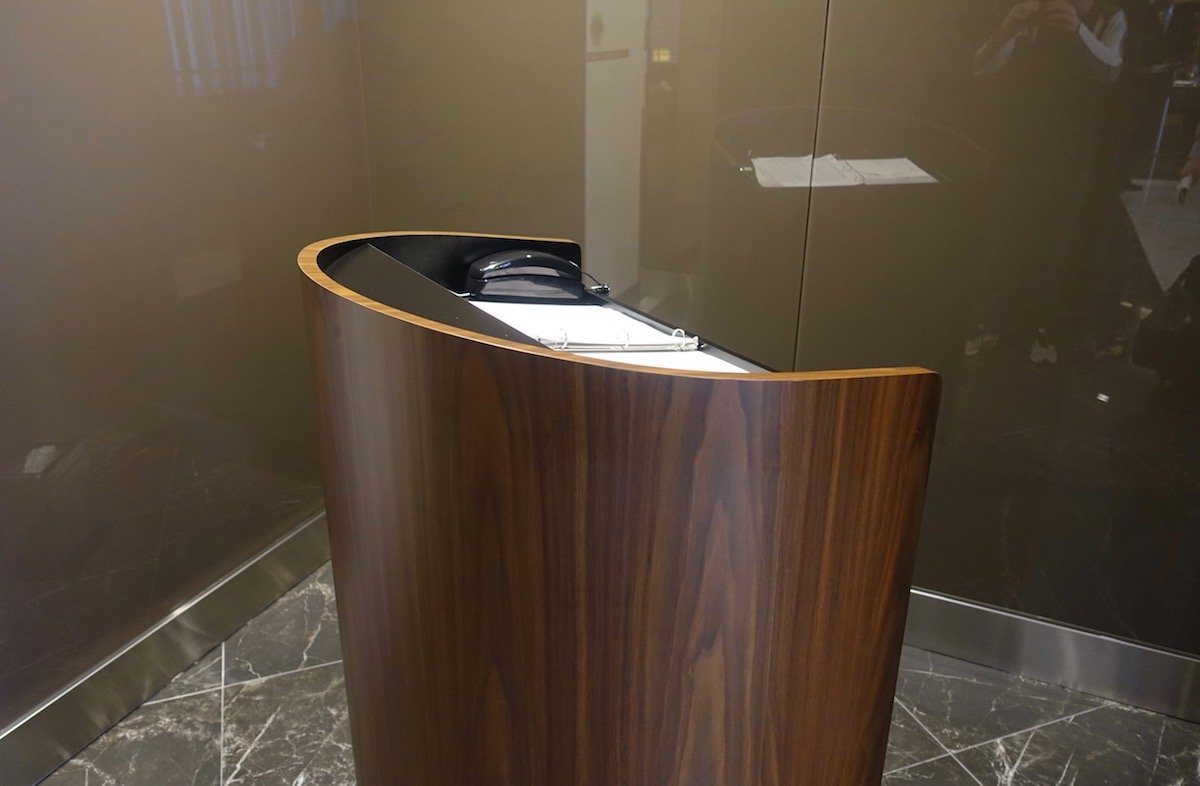 The facility is stunning. American really has done a spectacularly good job with how they’ve designed these.

Just inside the entrance is the main bar area, which has five high-top seats. 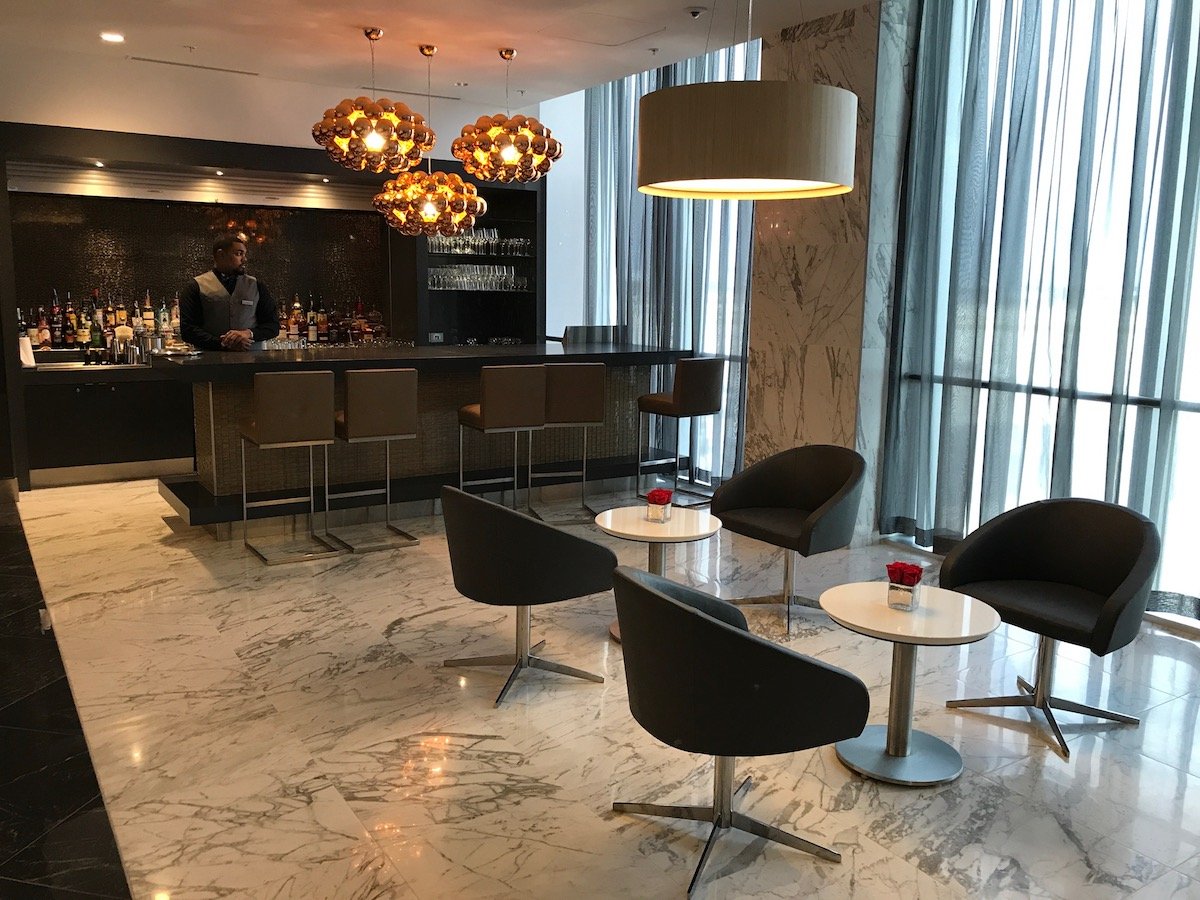 Then there’s more of a casual seating area, with four seats in the center of the lounge, and then four more along the wall. 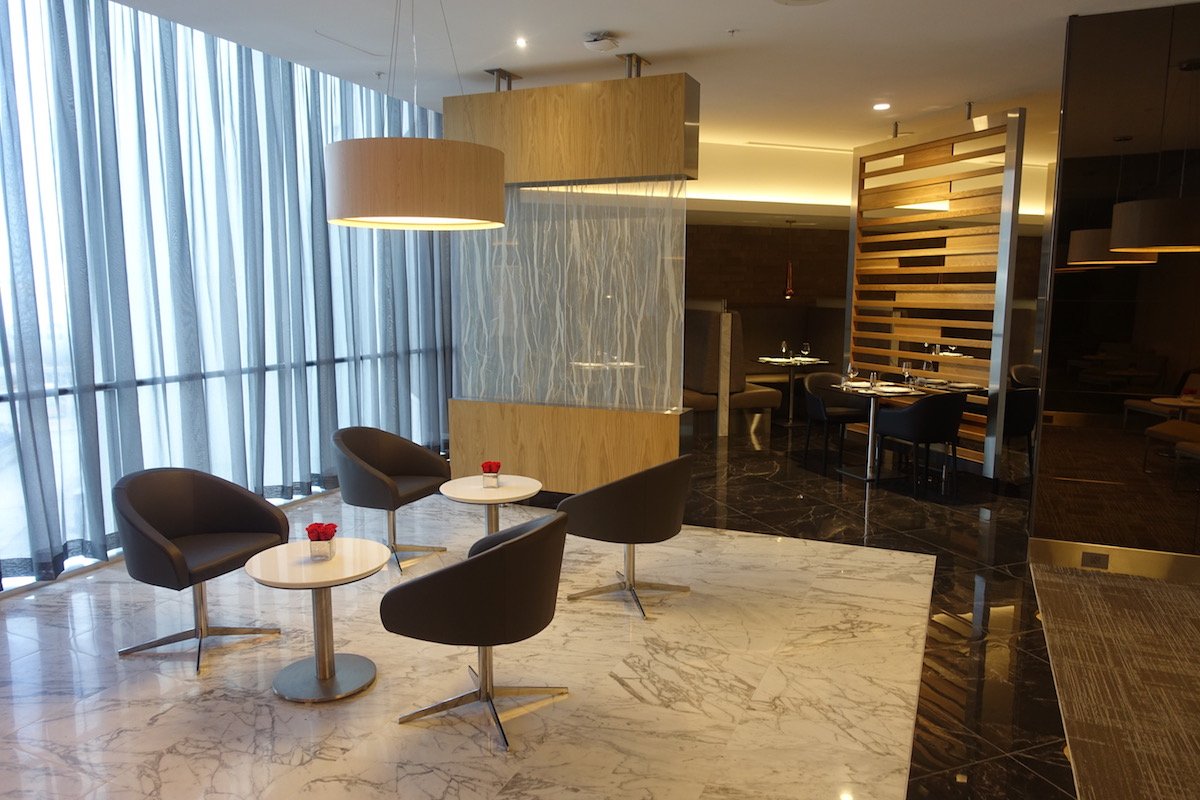 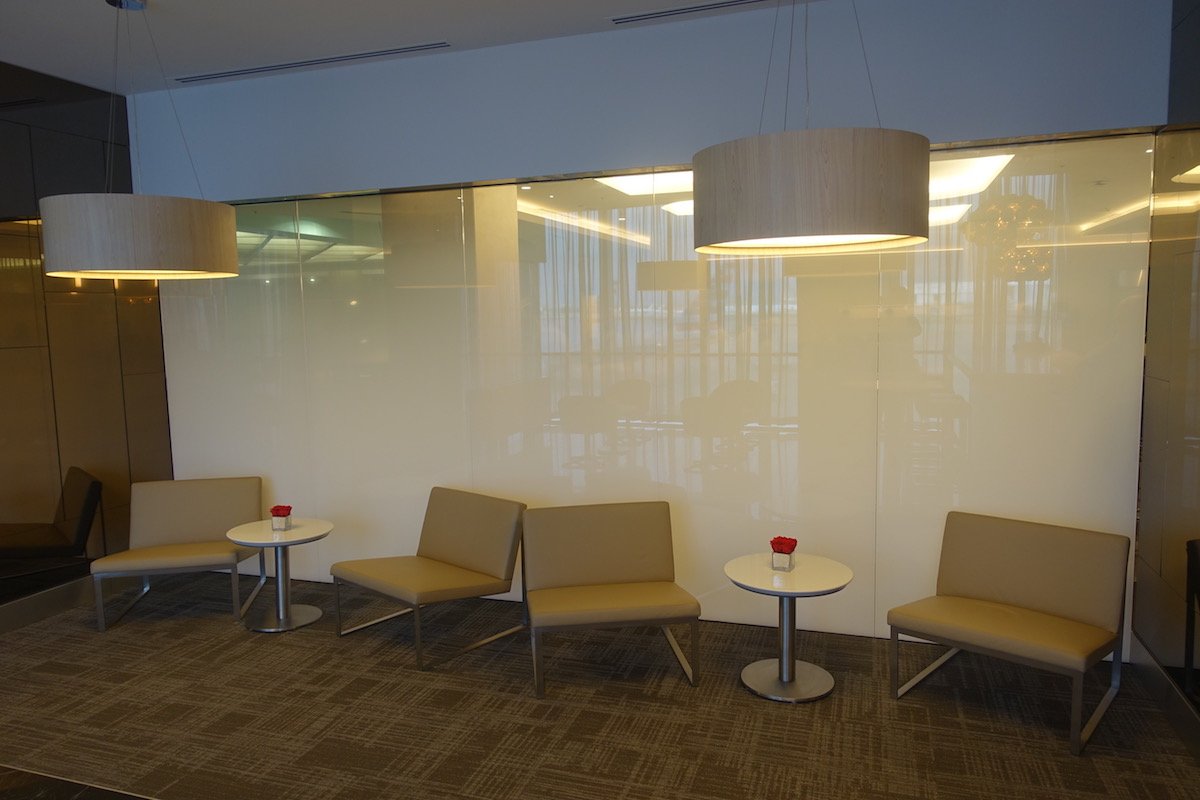 Past that is the main dining area. The lounge has 10 tables that seat a total of 20 people. Each table seats two people, and there are four booths and six tables. I like that they have partitions between each of the tables to create more of a sense of privacy. 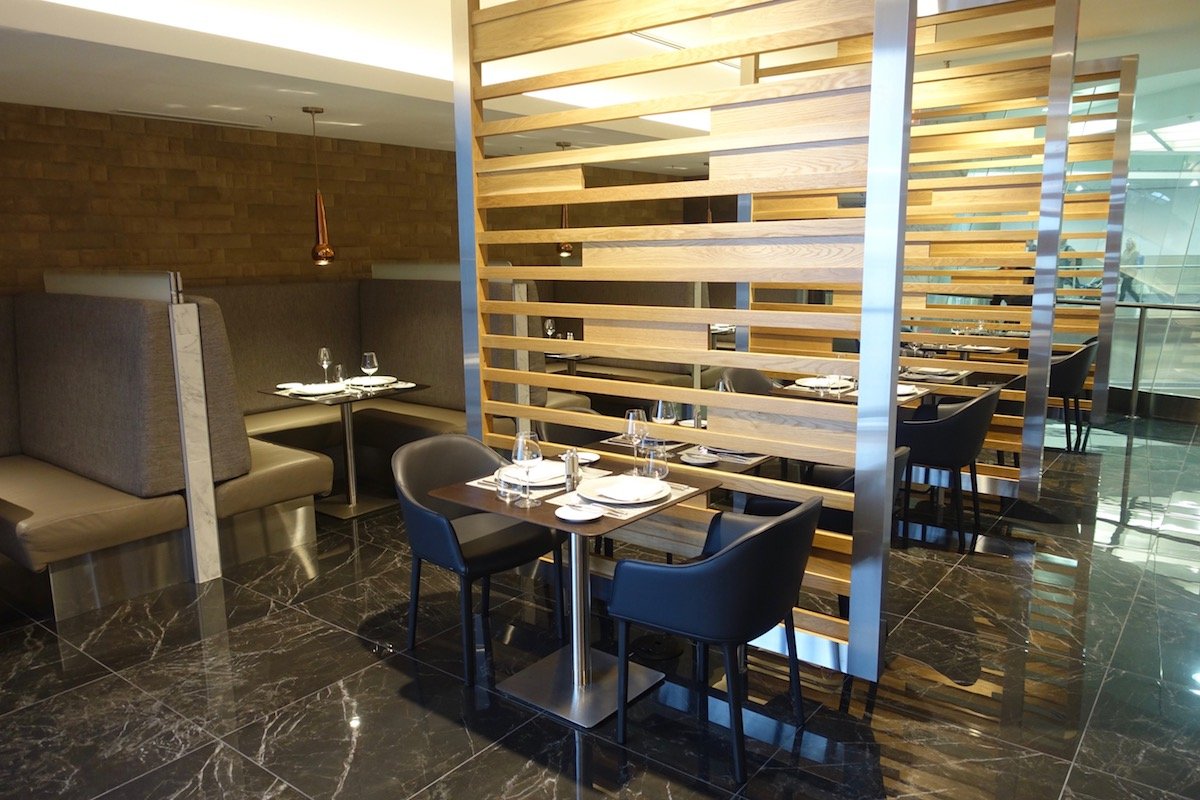 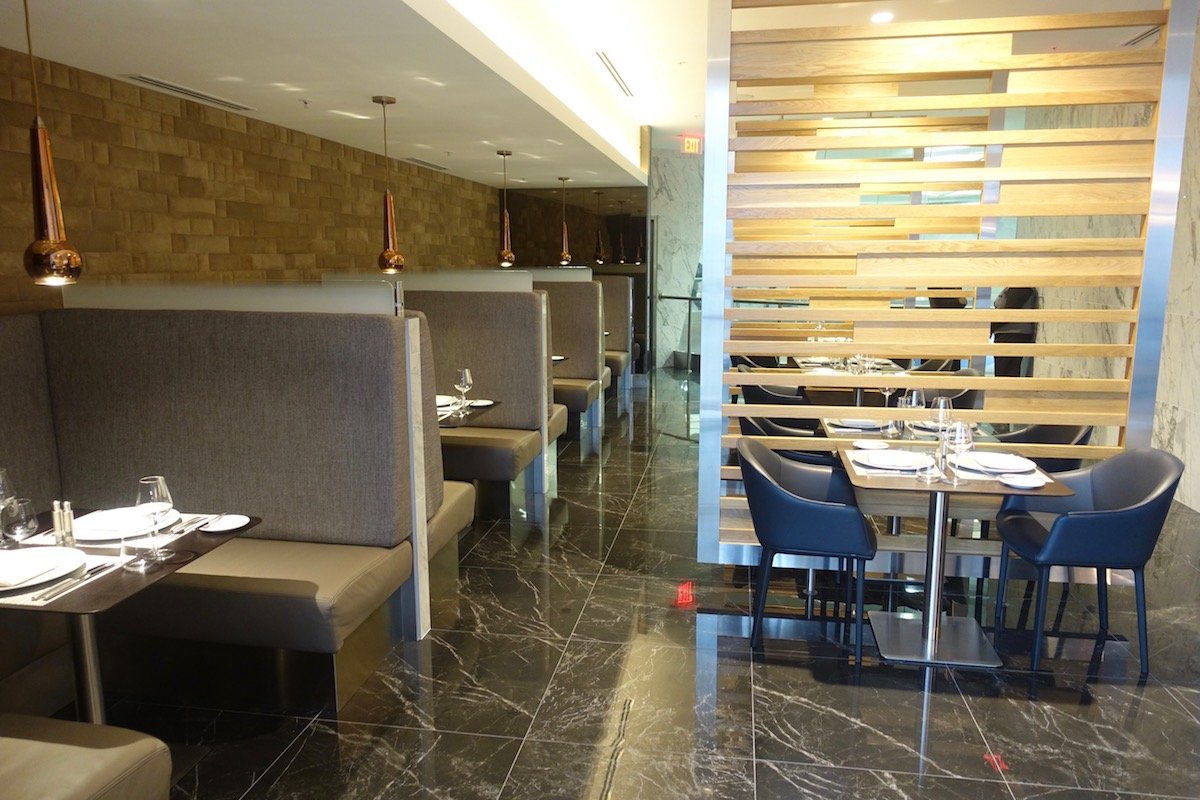 I love the booths, especially if traveling alone, as there’s plenty of room to set up a laptop and get comfortable. 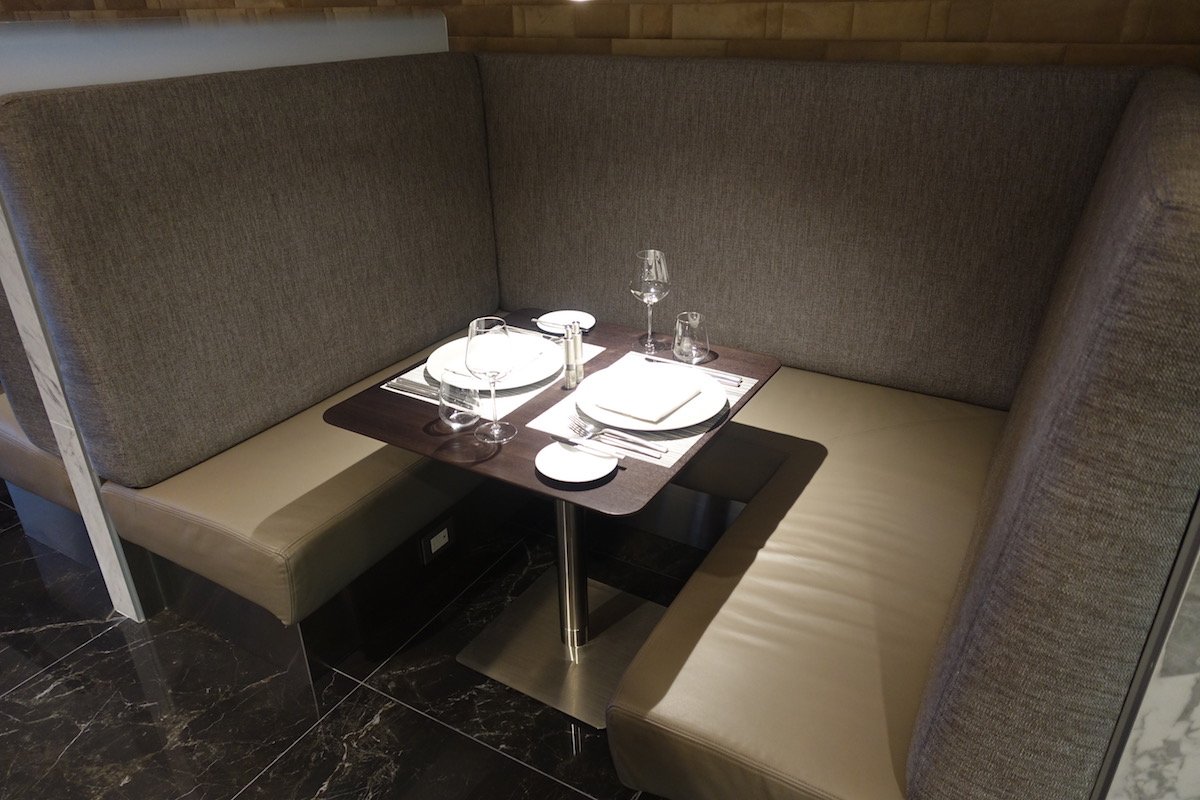 The other tables are perfectly nice as well. 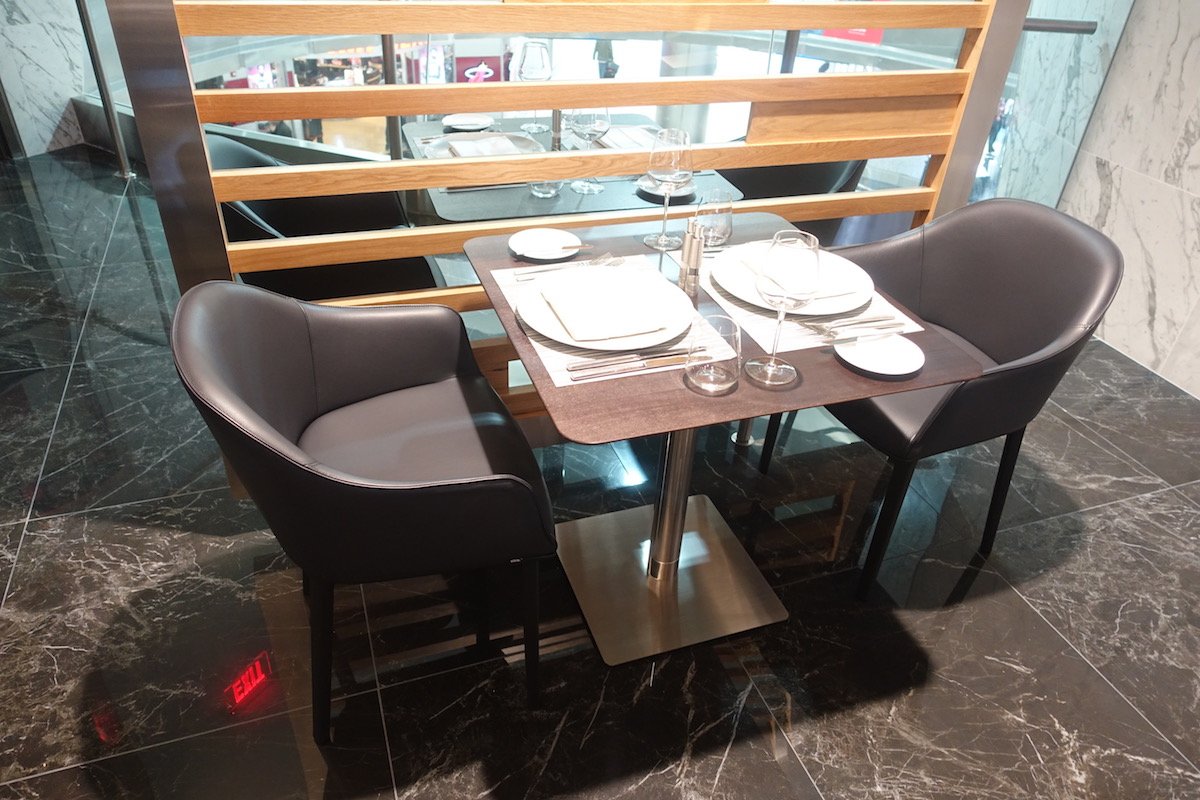 Since there were three of us, they pushed two tables together. 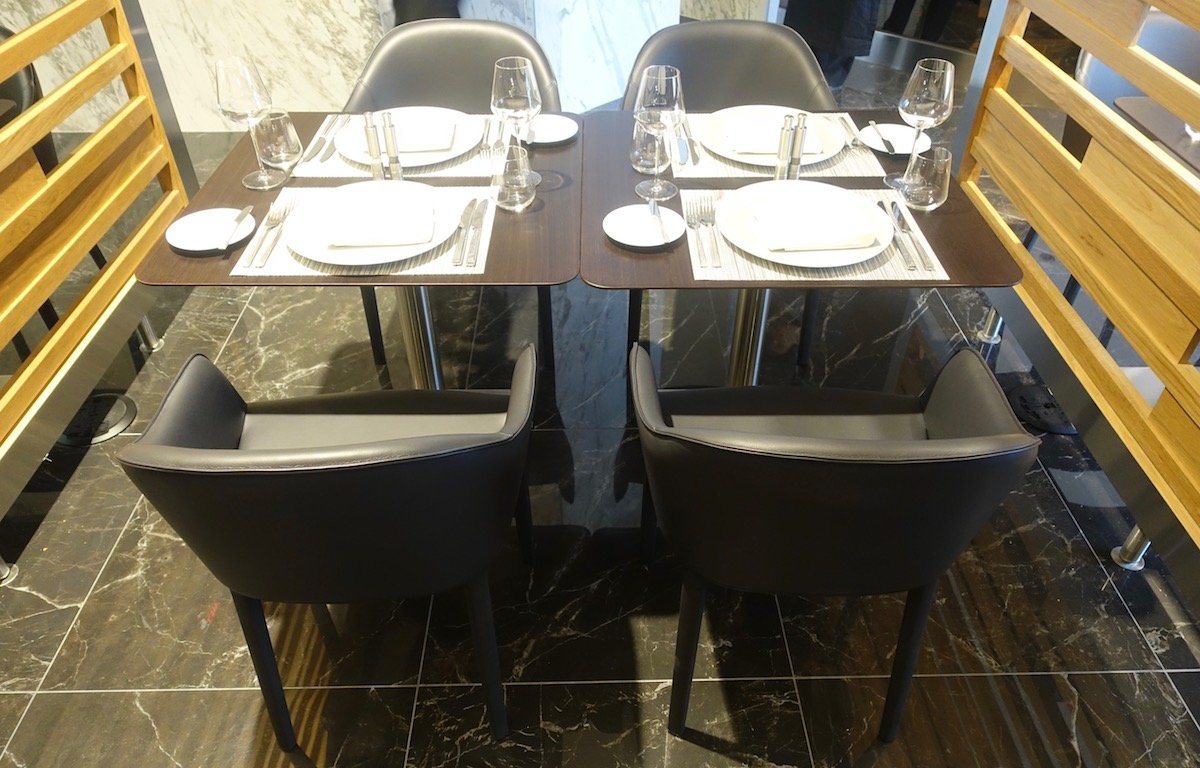 As far as the lounge’s views go, the area near the bar overlooks the apron and runways. 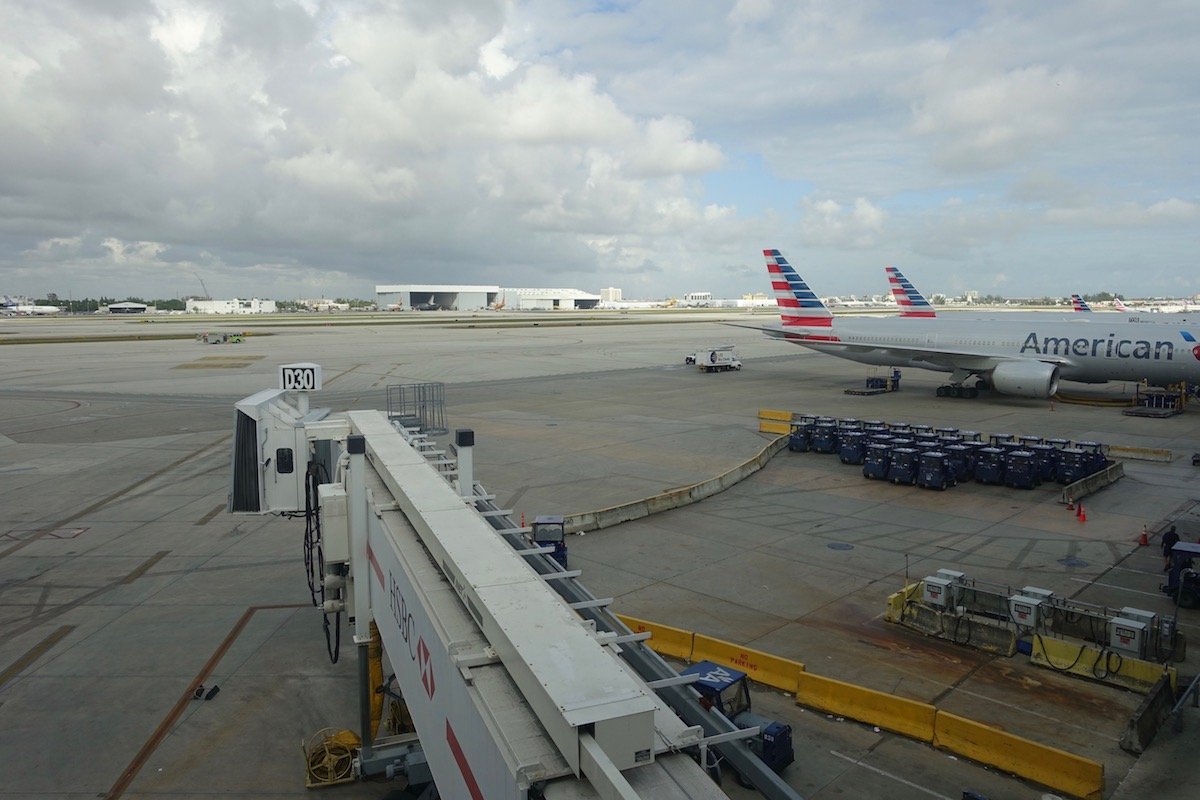 However, the other side of the dining facility overlooks the interior of the terminal, which is less inspiring. 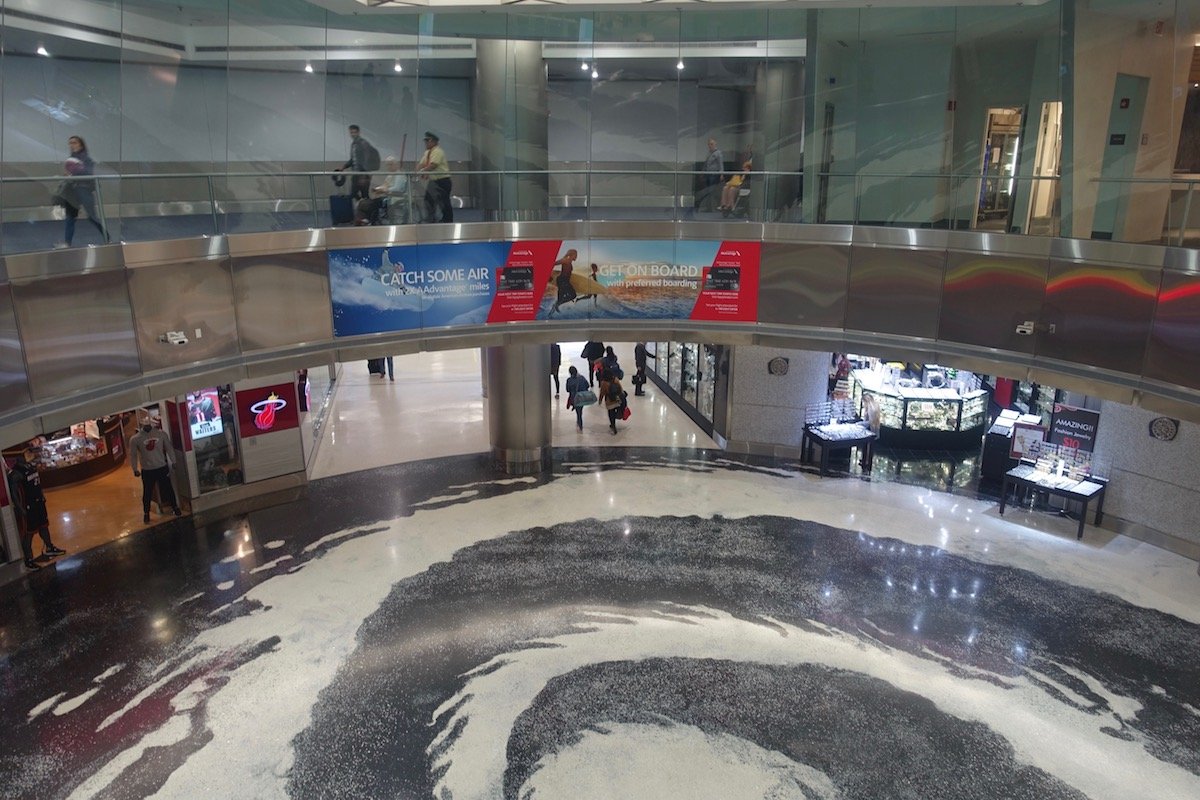 While the design between the Flagship First Dining facilities in New York and Miami are almost identical, I prefer the New York one since the entire space has amazing views of the runway.

We were presented with the main menu and wine line list as soon as we sat down, which were on beautiful wood clipboards with American branding on them. 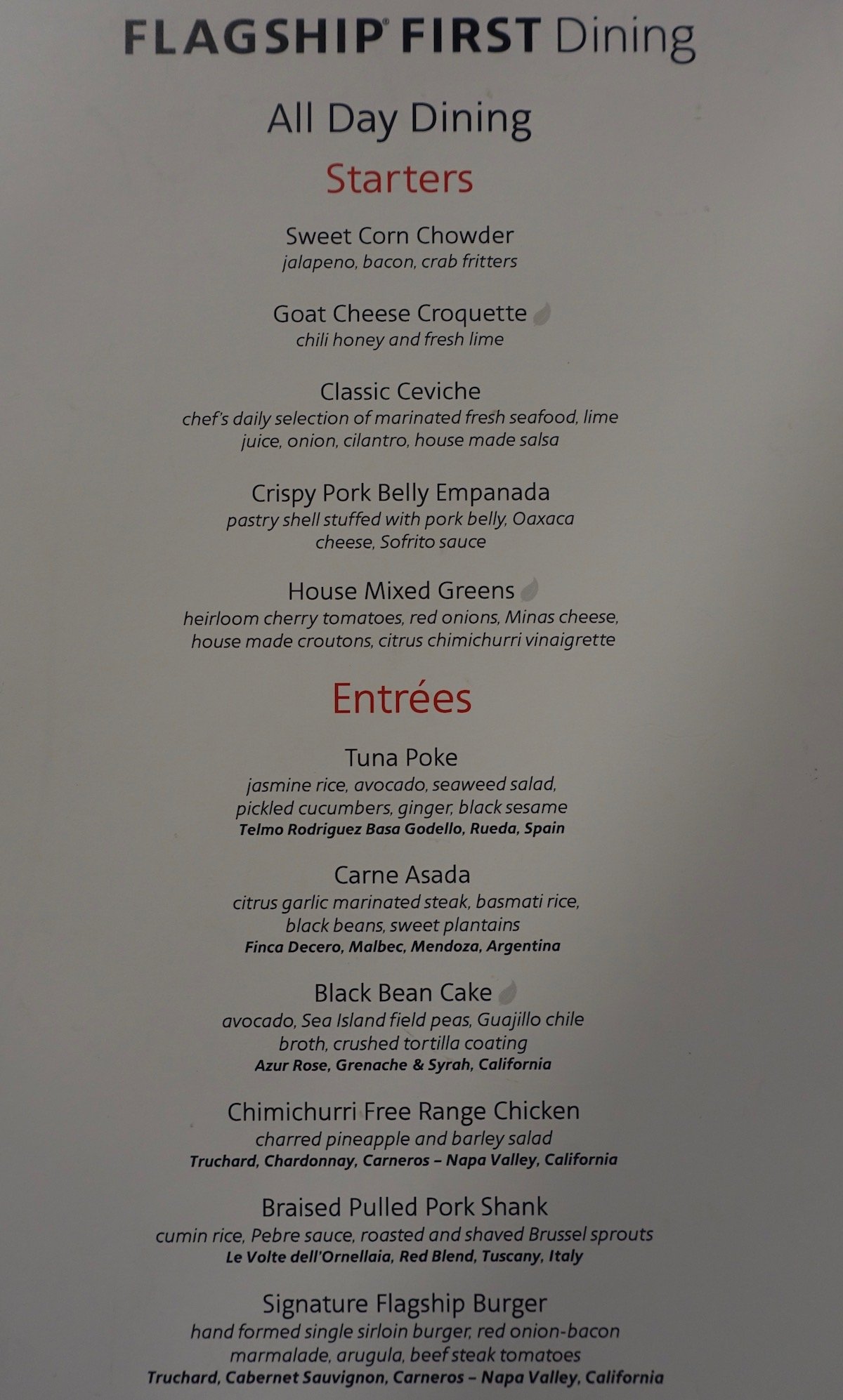 The dessert menu read as follows: 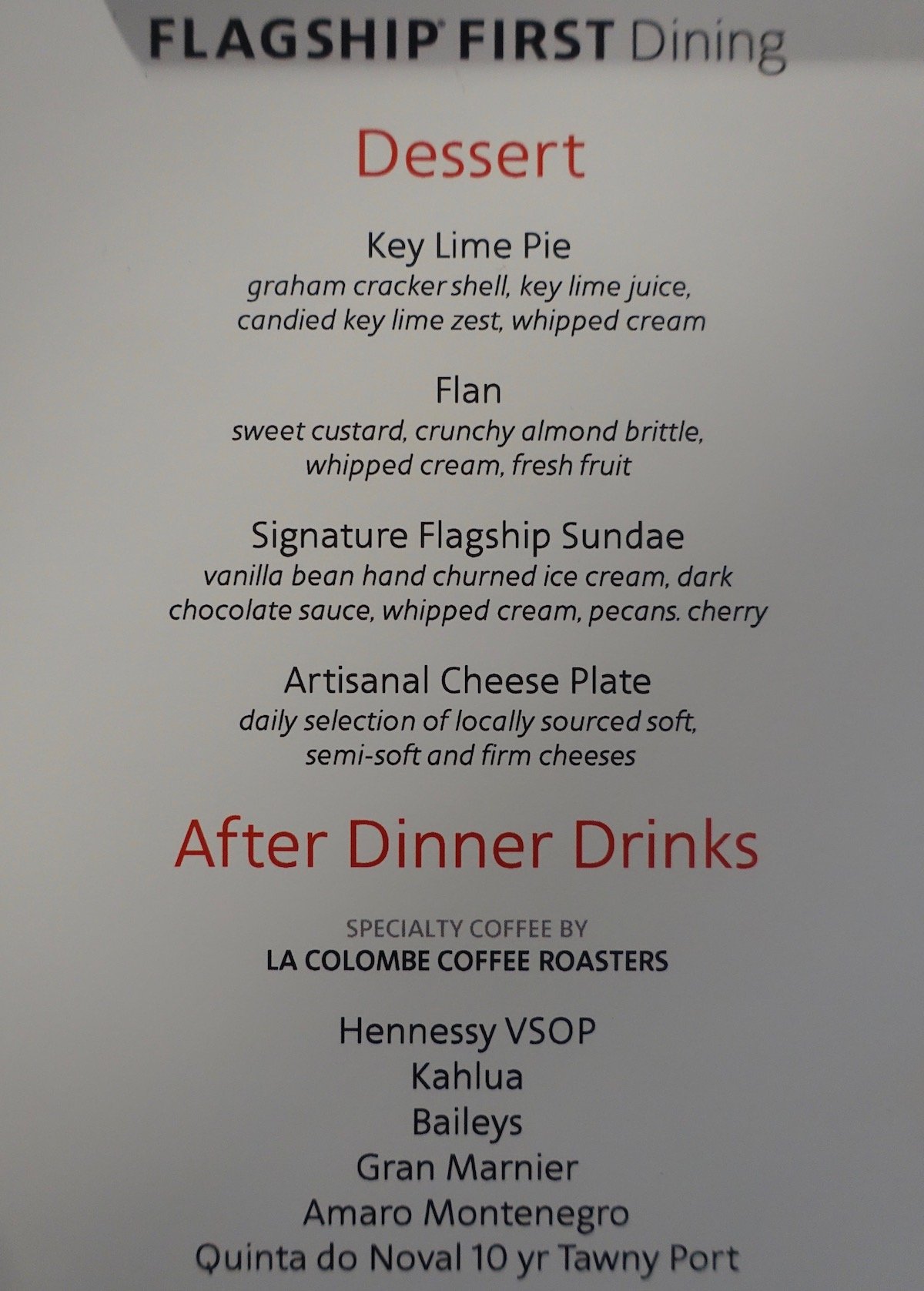 I couldn’t believe how well staffed the lounge was — there was a host, a bartender, at least two servers, and presumably at least one person in the kitchen. I guess that’s what’s needed to run anything resembling a restaurant, but keep in mind that presumably fewer than two dozen people per day have access to this facility.

Moments after settling in, one of the servers came around to present a selection of bread from a basket. 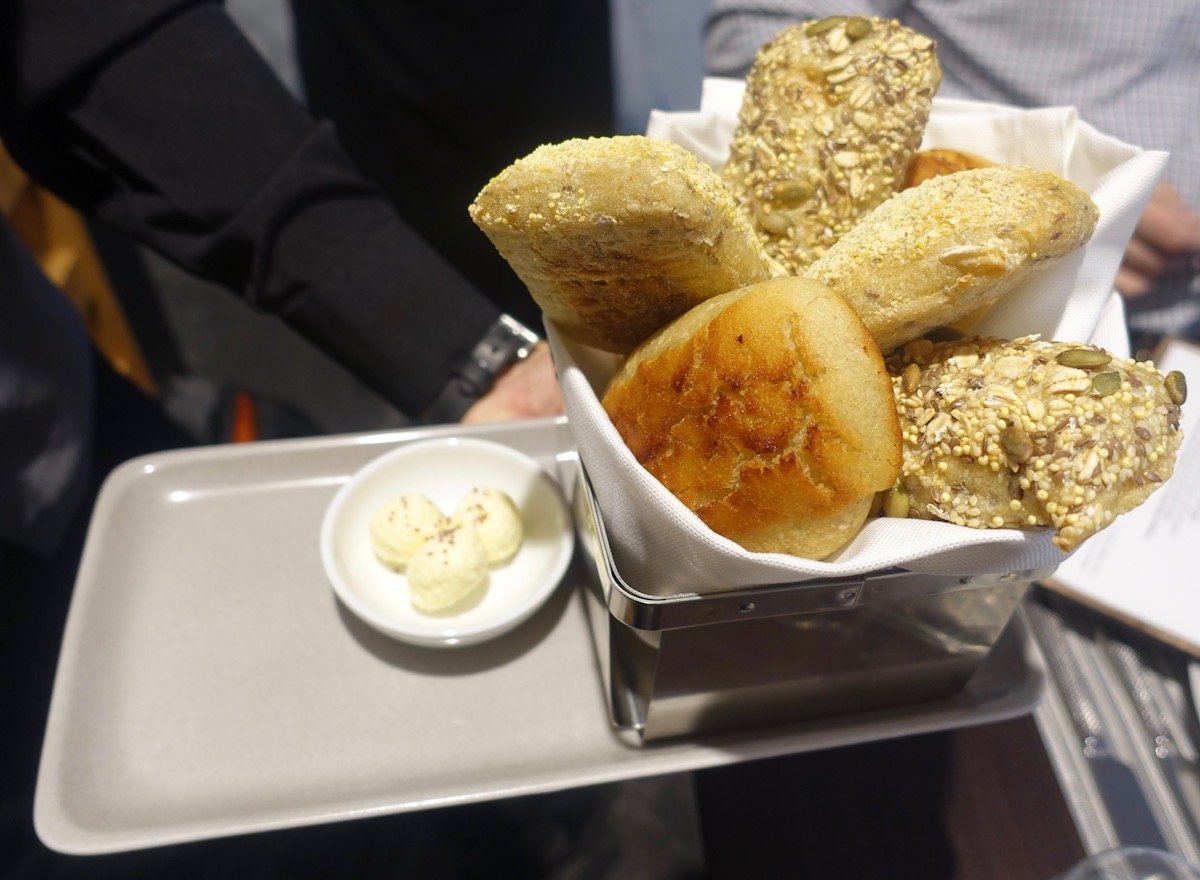 We were also offered our choice of still or sparkling water, which was served with a cute plate of lemons and limes. 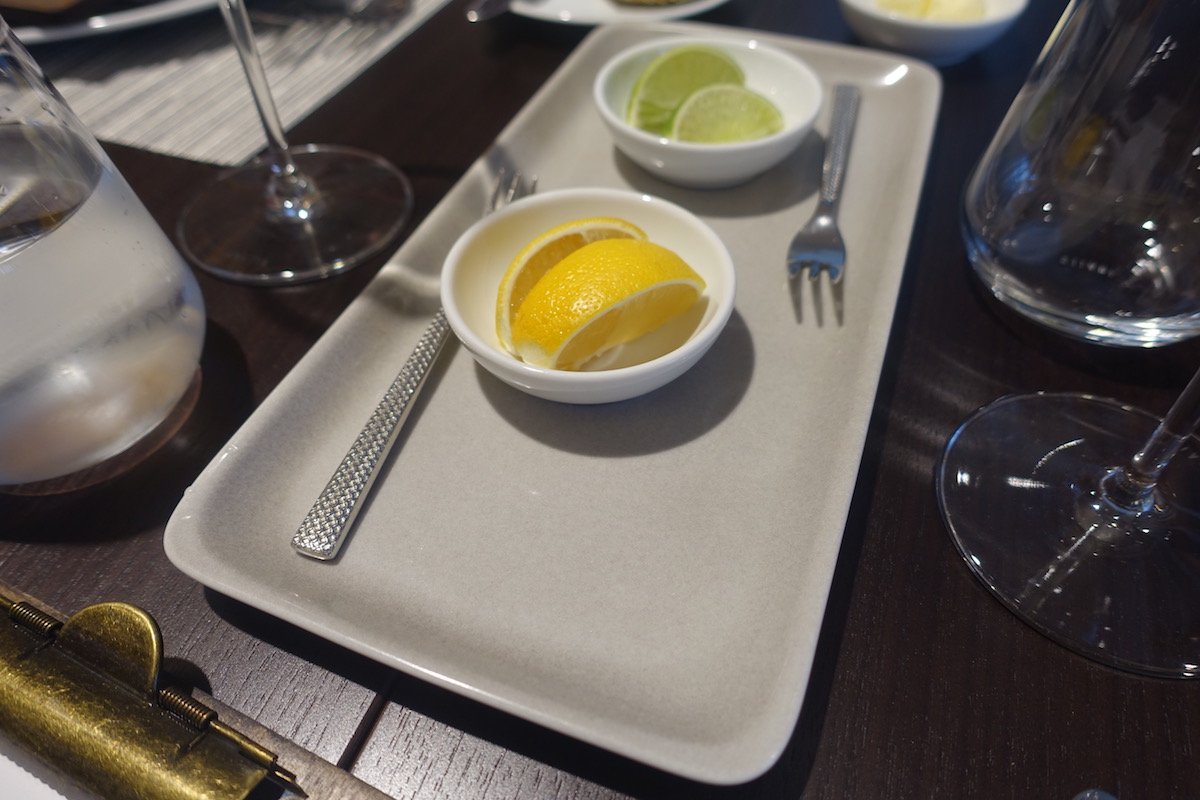 To drink I ordered the margarita picante. It was good, though didn’t wow me in the same way that the cocktails at the lounge in JFK did. 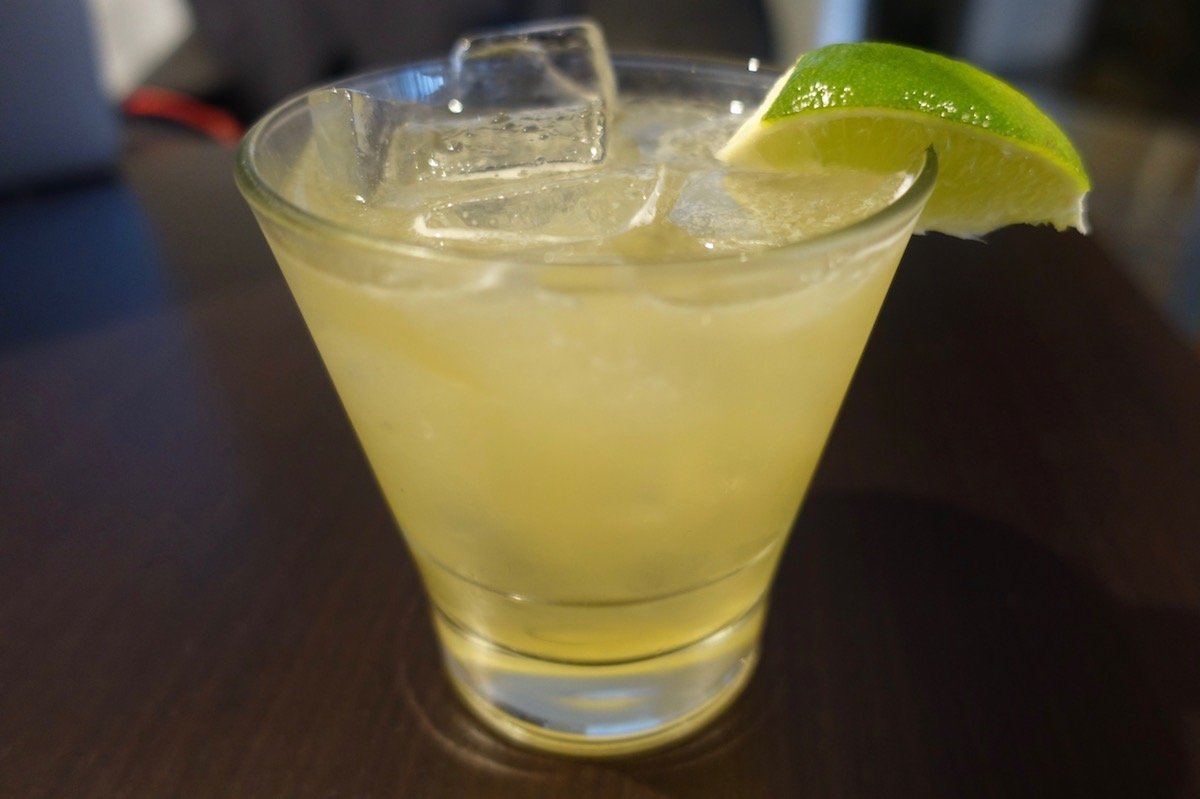 Since there were three of us, we decided to order one of every appetizer. Let me say upfront that I thought the presentation of all the dishes was flawless.

I was the only one who had the goat cheese croquette with chili honey and fresh lime. To me this was the best executed dish. 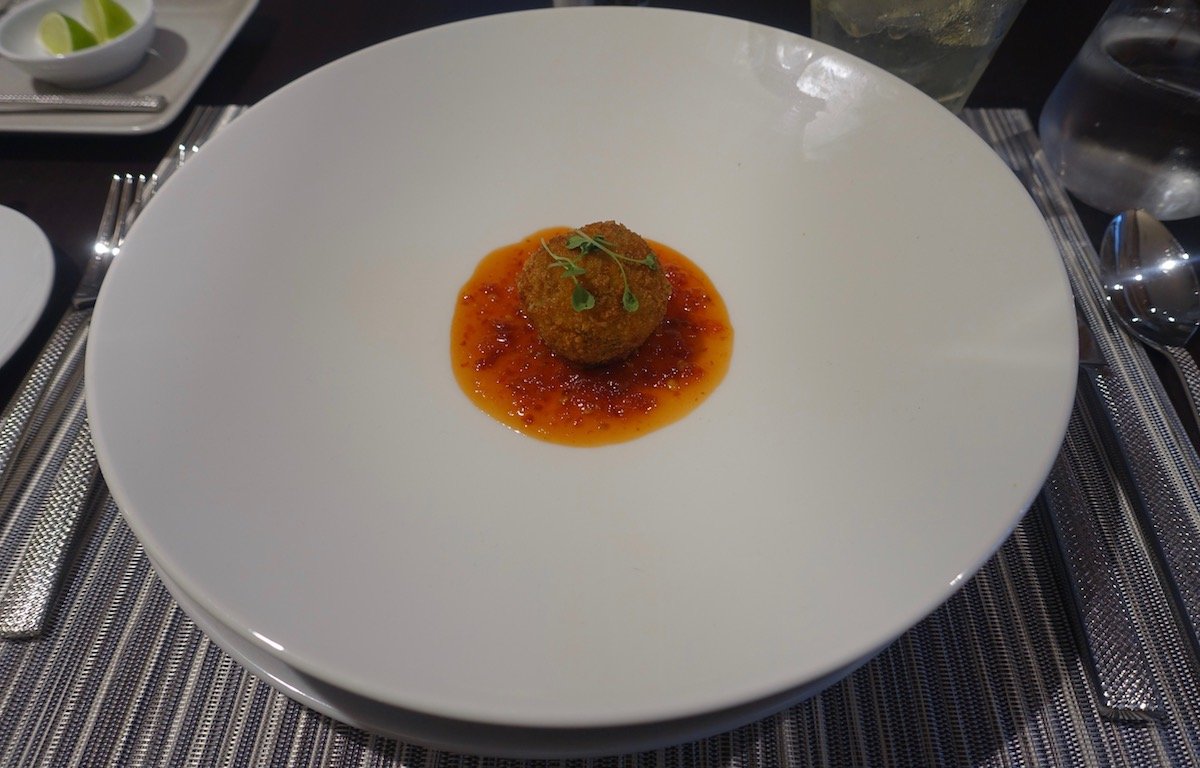 I had a spoon of the sweet corn chowder with jalapeno, bacon, and crab fritters. The presentation of the soup was great, and I appreciate that they pour the liquid into the plate at the table, which is a nice restaurant-style touch. 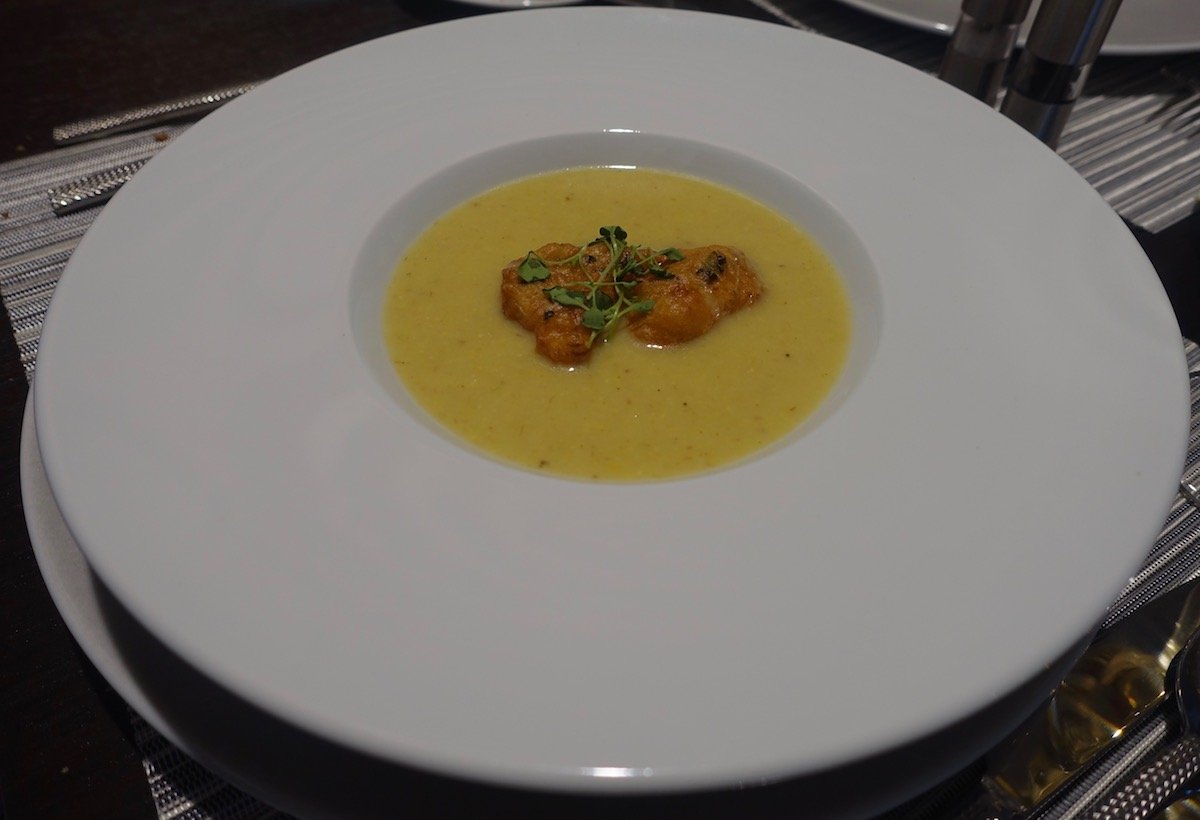 I also ordered the classic ceviche, served with lime juice, onion, cilantro, and house made salsa. The type of fish varies based on the day, and in this case it was monkfish. I’ve gotta say, I didn’t like this dish. The fish was chewy and slimy, and didn’t taste especially fresh… and I’m someone who usually loves ceviche. 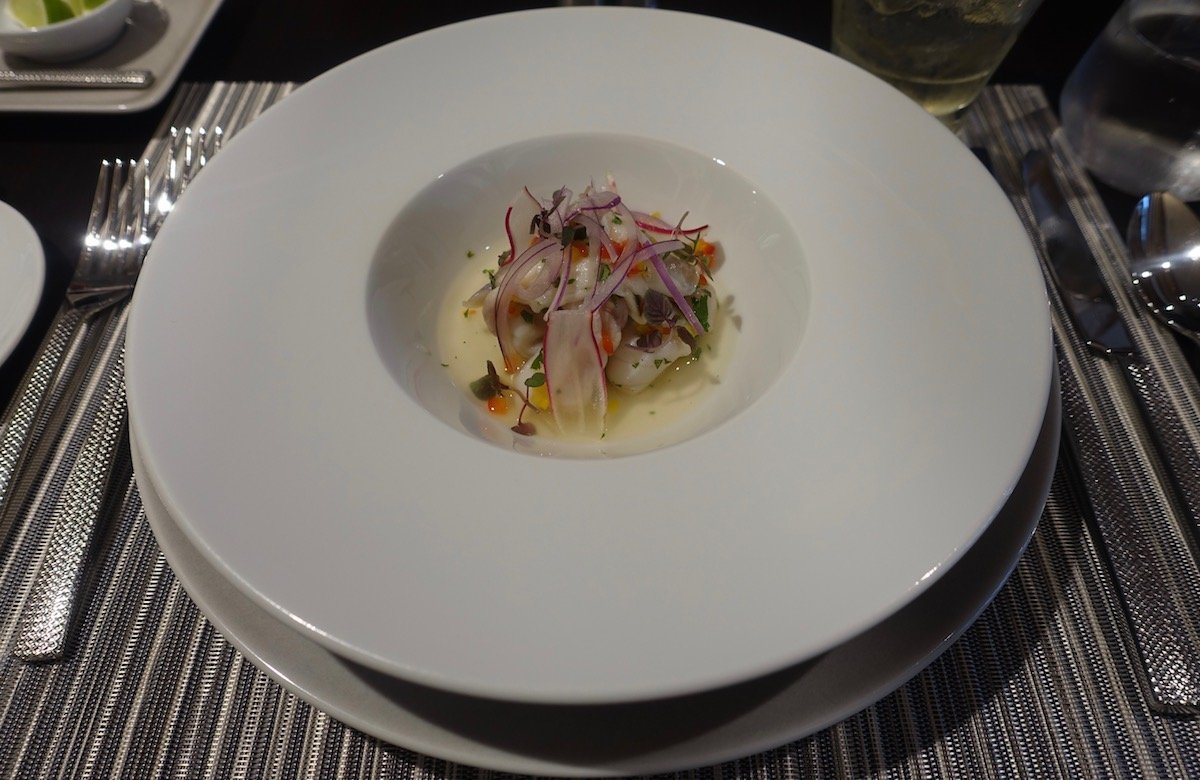 Then there were the crispy pork belly empanadas with oaxaca cheese, and sofrito sauce. I didn’t try these, since I generally stay away from pork.

For the main course I ordered the tuna poke. The tuna and avocado were excellent, though for me the rice was a miss. I would have preferred if they had warm rice, rather than room temperature rice that was almost congealed. 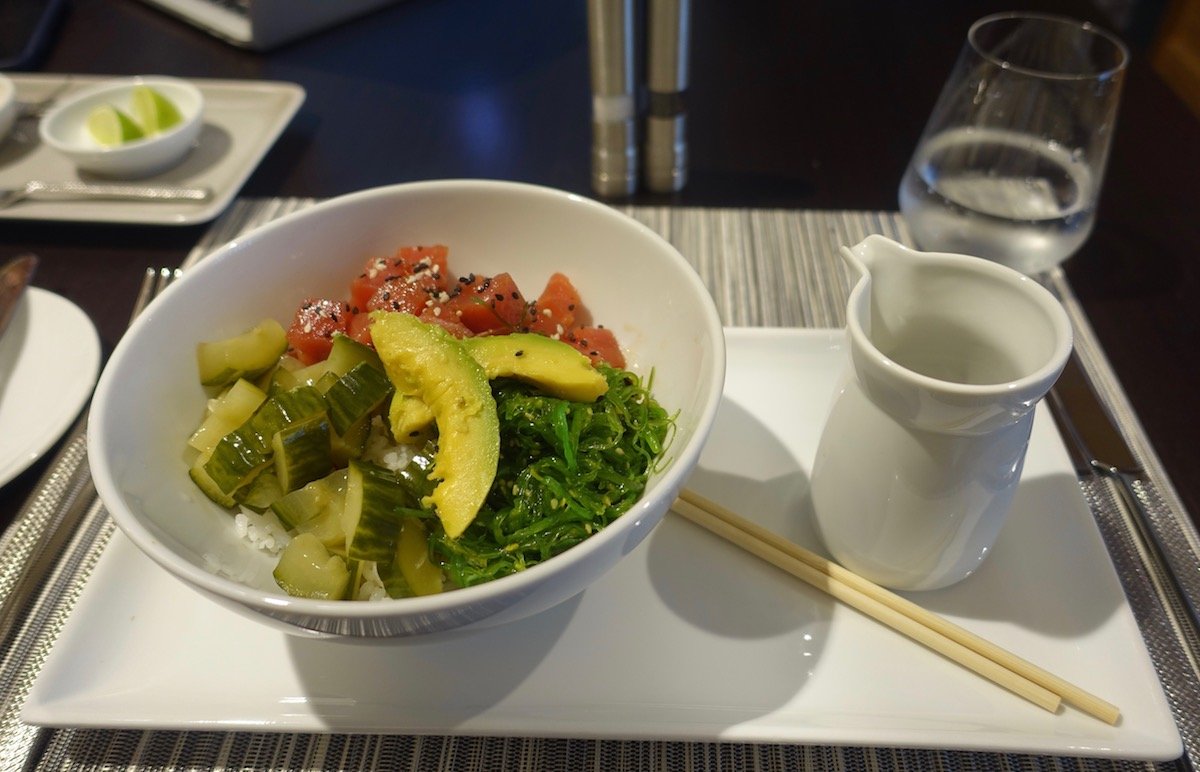 Then there was the Flagship burger, which looked great. 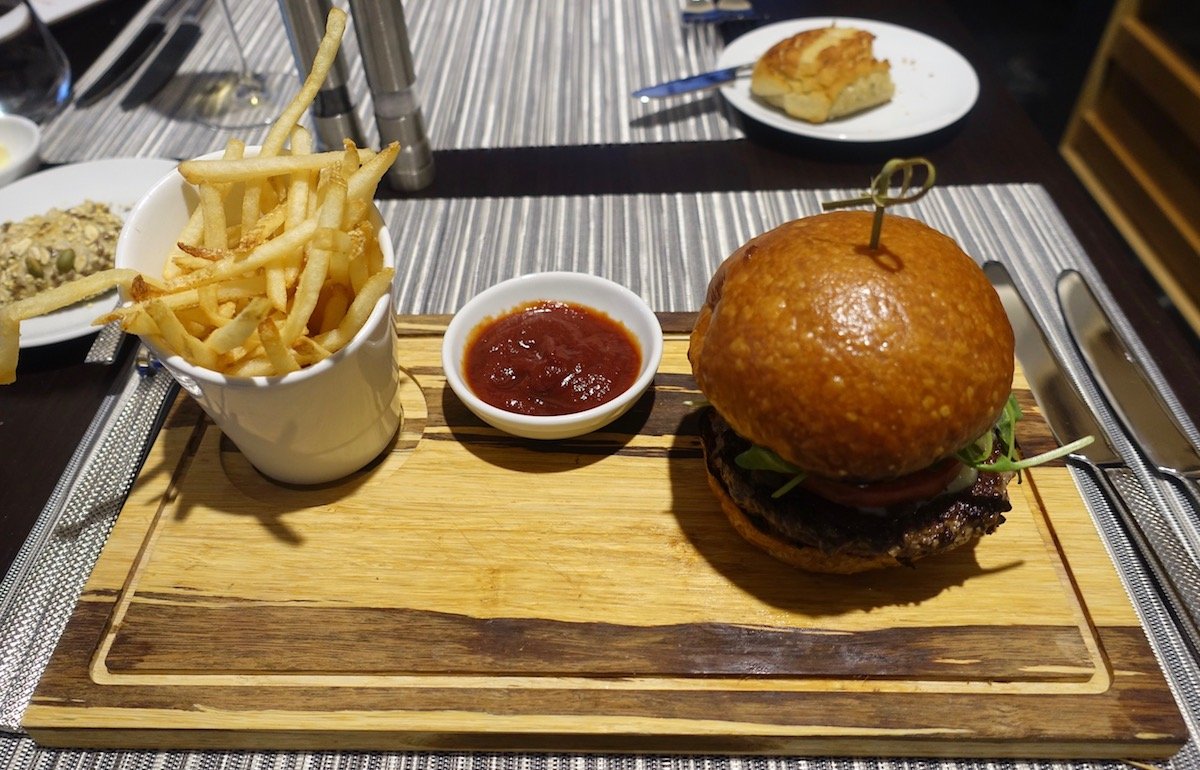 Unfortunately I had to stop my dining experience there. The lounge opens at 2PM and my flight was at 3:30PM (I changed to an earlier flight), so I missed out on the other main courses, though I feel like I got a good sense of the food options.

What I love about American’s Flagship First Dining Miami

I still can’t believe that this is a facility offered by Doug Parker & Co. The people who brought us US Airways are really offering something like this at an airport?! I have to pinch myself several times when in these facilities, because I can’t believe this is American Airlines.

This lounge is such a tranquil space. Even if you’re not that hungry, being able to relax here in such an elegant space is a privilege. This also is for the most part a restaurant quality experience.

Furthermore, the servers and hosts in the restaurant were friendly and well intentioned. It really is like dining in a restaurant.

Our visit wasn’t totally without issue. The dining facility is supposed to open at 2PM, so we were there right as it was supposed to open. Okay, we figured they might be a few minutes late. At 2:05PM we asked a staff member walking by, she went in, and said they were still setting up.

Five minutes later a manager saw us standing there and came over. He walked into the lounge and said that they’ve been open but that the door sensor wasn’t working. Maybe he really believed that, but clearly it wasn’t true, since a few minutes before someone walked in and said they were still setting up. This is minor, but I want to mention everything about the experience.

The food in the lounge was good, though some of the dishes weren’t as excellent as the ones I’ve had in the Flagship Lounge JFK. In particular, the ceviche wasn’t good.

Lastly, I think they need to work a bit on pacing the meals. When we sat down I told them I needed to be out of there within 45 minutes (by 3PM) so I could make my flight. So I placed an order and they confirmed they’d be able to get them for me in time. The food took a while to come out, and at 2:55PM I followed up on the main. Sure enough it was served at 3PM on the dot, exactly when I needed to leave. So I think they need to make sure they’re managing expectations there. It’s fine if they say something isn’t possible, but they at least have to tell people what is and isn’t realistic.

When I visited the JFK Flagship Lounge, one of the only other guests in the lounge stormed out angry and was cussing because his meal wasn’t being served in time. I get running a restaurant can be tough, but at an airport this is even more important than elsewhere to manage timing expectations.

Lastly, I’ve mentioned this before, but I wish they had a proper espresso machine in Flagship First Dining, rather than just one of those machines where you push a button. They want this to be a restaurant style experience, but I wouldn’t be happy if I went to a high end restaurant, ordered a cappuccino, and got one that clearly came out of a machine.

I can’t believe this facility is run by a US airline. What a treat. Too bad such a limited number of people have access to it. It truly is part of the experience that, domestically, make these some of the best airport lounges.

The 77W flight MIA LAX with 3 cabins was operating earlier in the year but has not been used for many months now.

Arrived From LHR in First earlier this week connecting domestically in First and was denied access. I asked numerous staff. All had to check with someone - likely he same person, I imagine. According to my experience earlier this week you have to DEPART in 3 class First to gain entry, not ‘to/from’ as this article implies. The website isn’t clear either. 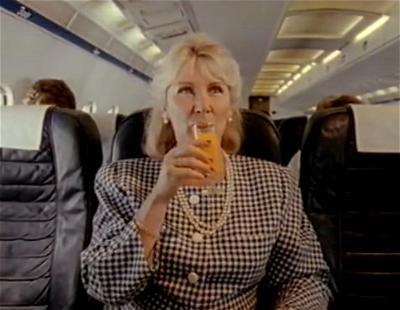 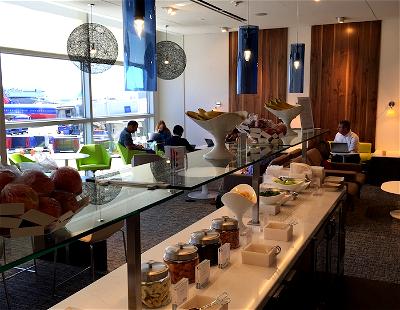 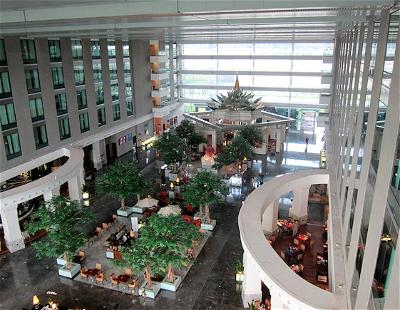