American Airlines is continuing their trend of adding partner airline award bookings to their website, aa.com. 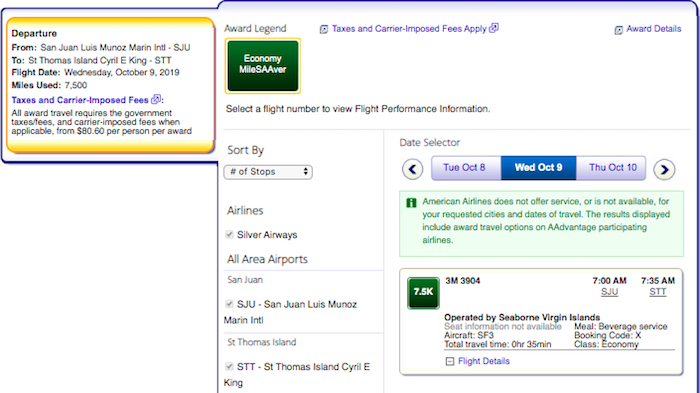 American says that this is the 11th partner airline they’ve added for award bookings on aa.com in the past year, which is pretty impressive.

While I hate American Airlines’ new award search interface, I think the old one is great, and offers a solid user experience.

What Is Seaborne Airlines?

American recently added online award bookings on airlines like Cathay Pacific, so by comparison Seaborne Airlines may not sound familiar

For those of you who don’t know about Seaborne Airlines, they operate a fleet of four Saab 340 turboprops from San Juan, Puerto Rico, to neighboring islands. Here’s their current routemap:

As you can see, they’re a useful airline for island-hopping.

What Airlines Awards Can Be Booked On AA.com?

At this point you can redeem American AAdvantage miles for travel on the following airlines on aa.com:

I believe at this point that means only China Southern and LATAM awards aren’t showing on aa.com, as I believe all other partners now show up there, which is pretty darn good.

It’s impressive that American has added online award redemptions on so many partner airlines to their website. While Seaborne Airlines is one of their more obscure partners, the airline has the potential to be valuable if you’re traveling to or around the Caribbean.

Has anyone flown Seaborne Airlines before?

Hopefully AA reaches out to GOL, AZUL,Aerolinas Argentina,Sky Chile and Peru along with LABoliviano along with Any Latin Based Carrier to counter attack the LATAM defection. I am not buying what has been reported in the Press and think LATAM may be in trouble (ala airBerlin) and asked AA,Qatar and IAG for financial backing and They said "NO" forcing themselves to peddle their Operation to Delta.I am not a Fan of Doug Parker but maybe the Consummate Penny Pincher had reasons to distance Himself from a struggling LATAM. Time will Tell....