Aegean is the Star Alliance airline based in Greece. While it’s generally hard to get excited about an airline just operating short haul flights within Europe, I find them to be a pleasant airline to fly with. While other airlines offer you nothing in short haul economy, Aegean still offers warm snacks.

Well, this week the airline has revealed a big rebranding, which coincides with the airline having recently added the A320neo to their fleet.

Aegean has a total of 46 firm orders for A320neos and A321neos, with an option for an additional 12 aircraft. Three A320neos have already joined Aegean’s fleet, and all 46 planes are supposed to be delivered by 2025. That’s a huge expansion, and just about matches the size of their current fleet.

The first A320neo is expected to start flying between Athens and Munich as of tomorrow, Friday, February 14, 2020.

Aegean’s fleet otherwise consists of 49 A320 family aircraft, including:

It doesn’t sound like the airline is using these to replace existing planes 1:1, but rather they’re using these to add capacity. Aegean says that each new plane brings an estimated:

The airline notes that their new planes have 19-23% fewer emissions per passenger seat than previous generation Airbus aircraft, which they currently fly. The plane is not only fuel efficient, but also has more range.

With the delivery of the A320neo, Aegean is also introducing a new livery.

For context, below is a picture of Aegean’s old livery. 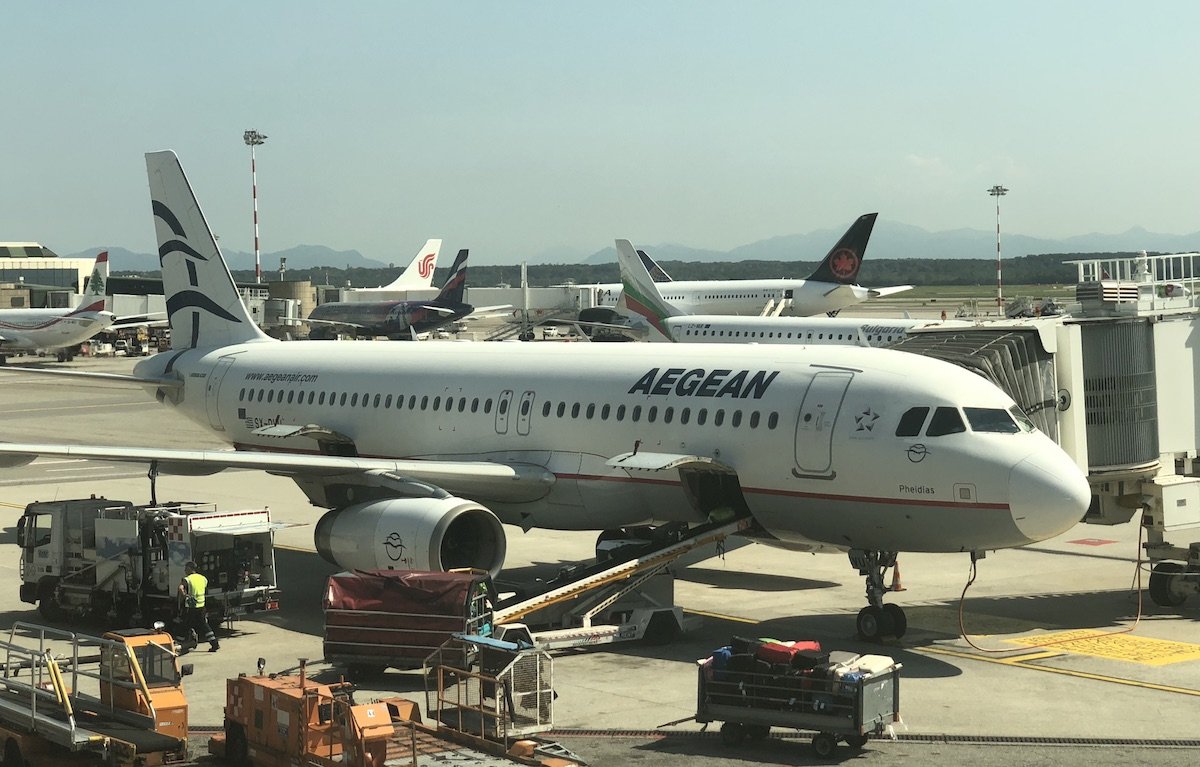 Aegean A320 with old livery

The new livery is most definitely more modern, and it also follows the industry trend we’re seeing across the board. It looks like a cross between the new LATAM and Joon liveries, if you ask me.

As before, business class will consist of economy seats with blocked middles, and little trays on the center seats.

The airline has USB outlets at all seats, though no 110v outlets. Each seat also has a portable entertainment holder.

Aegean has a great onboard service as far as intra-Europe airlines go, so I’m happy to see them expand. I quite like Aegean’s new branding (even if it’s not that creative), and I’m also happy to see them at least adding USB outlets to planes.

Otherwise these A320neos aren’t much to get excited about, as the airline is squeezing even more seats onto planes.

New image much worse than the previous elegant and very distinctive one , by adding one row the galley is insufficient for the hostesses to work (has the airline consulted them ?), the worst is the toilets at rear with half the size of the previous a320 models , impossible to properly wash hands. In a four hour flight (ath to London,Dublin,Lisbon and others) how can people waiting for toilet and hostesses stand in such a tiny area ? During a recent flt fm Zrh to Ath crew announced that in case a tablet or phone became overheated during the use of the power points passenger to let the crew know: if there is such a risk what is the purpose of installing power outlets on each seat ? Wifi system useless in providing accurate flt info

@GB Extremely well put. I think there has been a general divergence from priorities, as there are so many complaints about the blocked middle seat style but food and lounge access are not considered. Aegean offer a decent product and do not forget they are still a regional airline yet offer a superior experience to Lufthansa BA and Air France (in general). They have a streaming service which, while some European carriers have wifi, is still unique and rare within Europe. And most importantly, their crew, operational reliability and ethos are fantastic, let alone their phenomenal mileage programme!

To everybody complaining about the business class, I honestly don't know why anybody finds the US 'first class' to be superior. The seat is usually larger, but the cabin is always full and you always have someone sitting next to you. On European airlines, you often have a row of 3 to yourself, because if the flight is not full, they can just move the curtain back to give as much room as possible to business class passengers. And I personally would rather have 3 normal seats over a US style first class seat any day. Additionally, every other aspect of the service is better than the US equivalent. You get lounge access. You get a meal on every flight. I mean, even on a 5 hour+ flight in the US, if it is not at 'mealtime', they will serve you a bag of crisps and tell you to be grateful. Fly a 1 hour flight on Aegean in business and you will receive a 4 course meal. And on any European carrier, you will at least get a main and a dessert. And the guaranteed empty middle seat gives you far more personal space because if there is somebody sitting next to you, they are further away. To me, the whole package feels more premium than the North American service which is basically a premium economy seat and a bag of crisps, but no lounge, (though that is also less of a loss because the North American lounges are also generally inferior offering a cold buffet and some soup.)