I’ve written recently about how I believe Norwegian is the best low cost carrier in Europe, and how even Ryanair is tolerable. Most airlines I fly in Europe on one or two hour hops, whether they are full service, or low cost, are fine, but forgettable.

Vueling is a low cost subsidiary of Iberia, with its main hubs at Barcelona and Rome Airports. I’ve flown them twice in the past and have another flight coming up in a few months time with them.

And I seem to have terrible luck with them, or perhaps they are just a terrible airline?

My very first flight on Vueling was from Athens to Barcelona. This flight was about three hours in length. This was before I had a Priority Pass membership, and I had a tight connection in Athens, so planned to buy something on board.

We were seated about half-way down the plane. We watched as the cabin crew brought a buy on board cart up to the top of the cabin and then spent forever slowly going through the cabin selling food and drinks.

We had perused the menu and decided what we wanted to purchase and waited patiently.

About an hour into the flight they finally got to the row before us, served us and then promptly wheeled the trolley away and disappeared for the rest of the flight. Everyone seated around and behind us looked at each other, confused.

Call bells went unanswered and there was no service, food and drinks for the rest of the flight.

There was no turbulence, seat-belt sign or instructions from the pilot for crew to take their seats.

We were starving by the time we arrived in Barcelona. 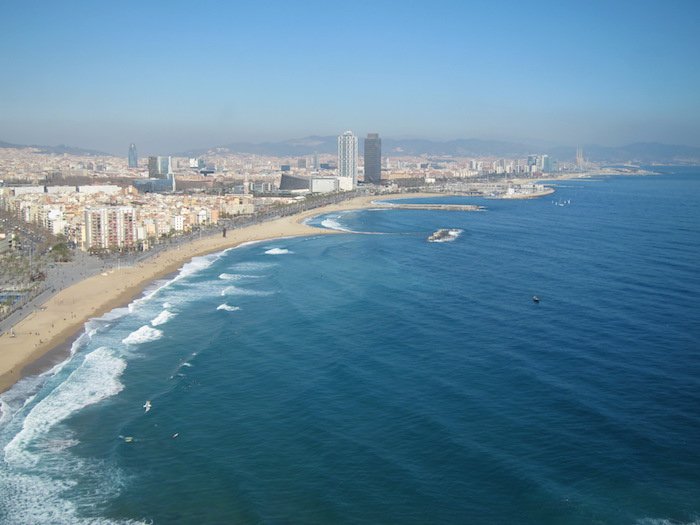 For my next Vueling flight, I flew from Barcelona to Ibiza. For some reason I had booked a 3:30pm flight and had to check out of my hotel at 10am. Having been in Barcelona for a week I had nothing else to do but go to the airport.

I arrived at Vueling check-in around 11am (I had to check a bag), and saw on the flight screens that there were several earlier flights to Barcelona, including one leaving in about one hour.

As I checked in my bag, I explained I was extremely early for the flight and asked if I could move to an earlier flight. Recognising that this was a low cost carrier I also said I was happy to pay a reasonable change fee. Without even checking any other flights and without giving a reason the check in agent simply replied

As I was checking in my bag other Vueling check in agents at adjacent desks were instructing passengers to fit their hand luggage into the metal measuring stand. One older lady was trying to do so but was having difficulty squeezing her bag into the space, despite trying her hardest.

The check-in agents were openly laughing loudly at her attempts, and alerted my check-in agent (who was checking my bag) and she joined in at laughing at the passenger and mocking her in Spanish. 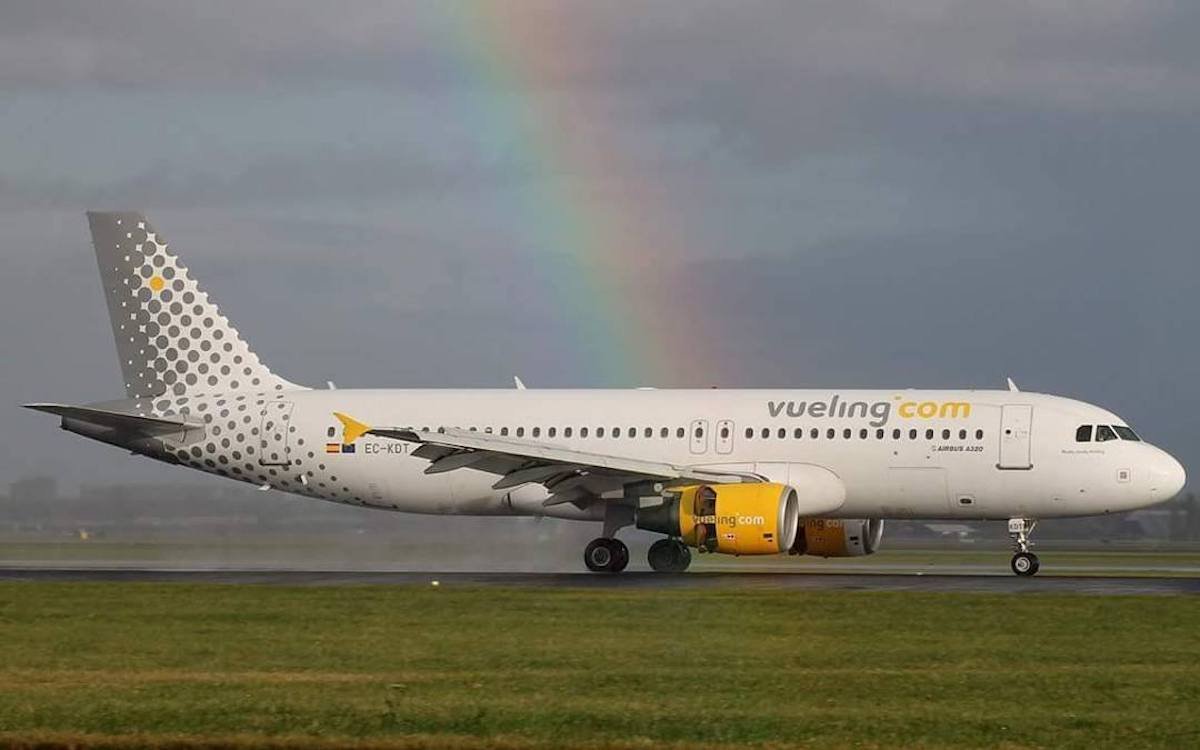 Flight 3 – Your booking has changed

In September I’m heading to Sardinia, Italy for five days. I needed to work a normal day on the Friday and then be in Olbia as early as possible Saturday morning. While there are direct, convenient flights to just about everywhere in Europe from London, Sardinia is actually one of the more difficult places to get to.

By far the most affordable option when I booked the flight a month ago was Vueling from London Luton to Olbia, via Barcelona. This involved overnighting in Barcelona for a less than ideal 7.5 hours, but even factoring in the cost of an airport hotel, it was still by far the cheapest and best option.

Yes it won’t be a full nights sleep, and Luton is my least favourite London airport to fly out of, but I’ll live.

So, despite both of my previous Vueling flights being terrible experiences, I went ahead and booked it. 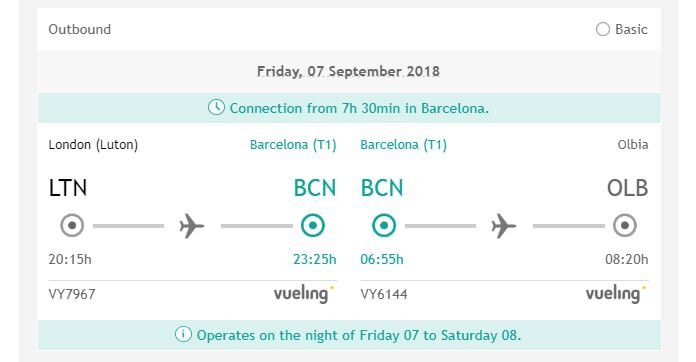 Within just two weeks of booking I receive an email from Vueling with the title:

IMPORTANT: Your booking has changed

Perhaps the flight is leaving London slightly earlier, or departing Barcelona the next morning slightly later, which would actually be a positive, because it would allow me a bit more sleep.

Would I be that lucky with Vueling? 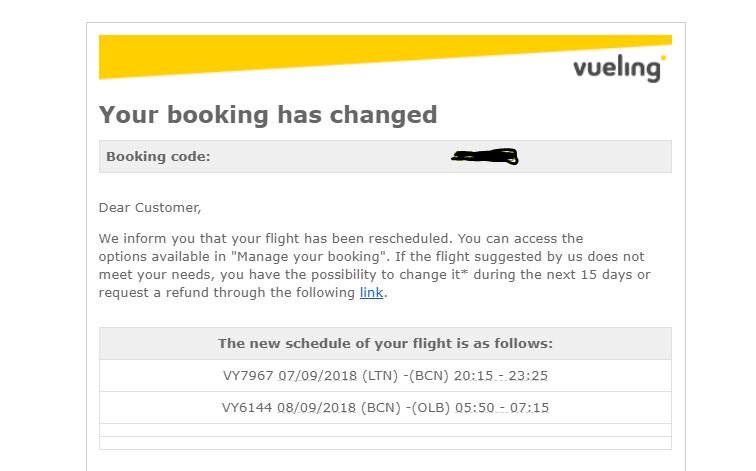 By the time I ‘enter’ the country, get to an airport hotel, check in and get to bed, and then wake up and be at the gate by, say 5am that will give me a grand total of about 3 hours sleep max. I’m not sure if it is even worth getting a hotel for that short space of time.

But it gets even better.

One week later, another email from Vueling:

IMPORTANT: Your flight is not going to operate 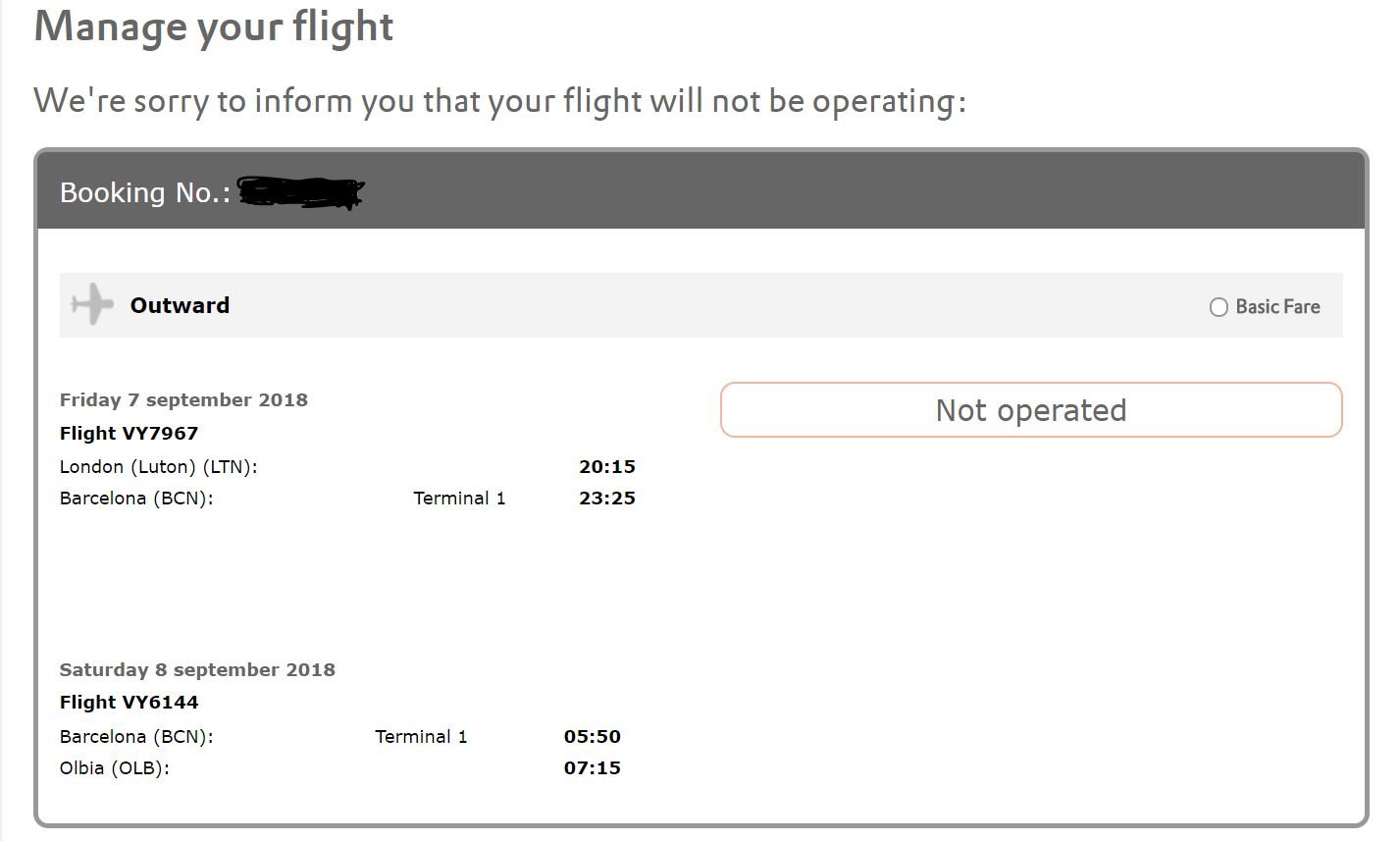 Vueling is offering me a full refund but has not proposed any alternative flights.

Looking myself at the alternatives (I still need to get to Olbia that day), the cheapest options (although more expensive than my original booking), are on… Vueling again!

Overnighting in Copenhagen will be very expensive, so I want to avoid that if possible.

I get it, no airline is perfect.

I think this is the first time I’ve ever had a cancelled flight in Europe, and I fly every few weeks. I’ve taken probably 20 flights with Ryanair and the worst thing that has happened is an hour delay.

What should I do about the Olbia flight? There is a cheap direct flight on Air Italy the next day, but it arrives mid afternoon meaning I lose half a day of a five day trip.

Have you flown Vueling? Are they a bad airline, or do I have bad luck?

Absolutely dreadful! My husband flew Qatar Syd/Doha/ Bcn on 31 May connecting directly as a codeshare with Vueling from Bcn to Alicante 1June . The bag failed to get loaded at Barcelona . On arrival at Alicante my husband and another passenger found themselves without luggage . They attended to lost baggage office and had Vueling forms completed in front of them which they signed. On Wednesday 3rd , Vueling in Barcelona called to say they found it and would forward to Alicante. It has now gone missing again. Barcelona and Alicante Vueling phone numbers are off the hook. Alicante airport say contact Vueling . Vueling now say Via email, he filled out the wrong form and refuse to track the luggage! Qatar have tracked the bag as far as they can and say Vueling had it arranged to go to Alicante ...and now it is out of they’re hands . So we are missing aud$2000 worth of luggage ..some of which is prescribed lotions that were above the 100ml carry on allowance. There are 2 luggage tags on the case with our contact details. How can they possibly deny us assistance in locating it?

I have a flight booked with Vueling from Granada to Barcelona on 15 May 2020. I've had to return to Australia so unable to take this flight. I'm reluctant to cancel it as I'm sure they will in the next week or two and maybe I'll get a refund or credit. I've tried e-mailing them but get no response other than to direct me to my booking. Does anyone know if they offer refunds if they cancel the flight?

Travelled with Vueling last month for the first time Manchester - Barcelona return. Outbound flight was delayed by an hour but this was manageable....return flight was a different story. For the Barcelona - Manchester leg, I had checked-in online successfully. However, my partner had booked separately and was unable to check-in online after spending 30 mins trying again and again. As he travels regularly for work, he thought he'd be fine checking in at the airport. At the check-in desk, he was told by unhelpful staff that the flight was overbooked and he would be on standby or he could fly back the next day via Amsterdam. It was very windy and rainy due to Storm Gloria, so we weren't surprised that this caused operational issues. However, we were left standing in the departure queue until our flight time had passed. Then we were told that they didn't know where our aircraft was or when it would arrive. There followed an hour with me and many of the passengers being driven around the airport in a bus, then standing in a queue at transit in order to come back to our departure gate! My partner, meanwhile, was waiting at the gate with a number of other passengers who were victims of overbooking. He spoke to the ground staff who explained the delays were due to a problem with the plane door because of the high winds. Anyhow, we all boarded eventually after a couple of hours (it seems some nervous flyers chose not to fly so all "overbooked" passengers were boarded) and were left sitting on the plane at the gate for about 30 mins with no tannoy communication from the crew. Due to the static plane rocking in the wind, some passengers became quite nervous but the cabin crew had disappeared behind a curtain at the front of the plane. The flight was actually not too bad, but our hold luggage arrived soaked through. I understand the delays and problems due to the storm, with many other flights delayed, which must have caused operational nightmares for the airport. I also understand that there are safety issues with the weather and would much prefer not to fly if the weather is bad. However, I don't excuse the lack of communication throughout the delay, which added to everyone's frustration and did not help the nervous flyers. Because of the poor customer service, I would not fly with them again. I don't agree that cheap equals rubbish, although I have avoided Ryanair in the past due to their inflexible behaviour.