Yesterday I wrote about the tragic story of how a United flight attendant instructed a passenger to place her dog (in a carrier) in an overhead bin, and at the end of the flight the dog was found dead. As someone who loves dogs (probably) far too much, I’m so disturbed and enraged by the story.

For reasons I explained in a separate post, I 100% put the blame on this incident on the airline. The flight attendant wasn’t following protocol, and while I assume she wasn’t trying to kill the dog, the negligence shown for someone in a safety role is completely unacceptable. I don’t know how you could ever recommend to put a living creature in the overhead bin, especially when United clearly states that the only safe place to put pets is underneath the seat in front.

So, was this just an isolated incident, or is United actually worse with transporting animals than other airlines? Last month the US Department of Transportation published all kinds of statistics for 2017 travel. Among these statistics is the number of losses, injuries, and deaths of animals transported by airlines that are reported to the DOT.

Here’s a chart with the comparison by airline: 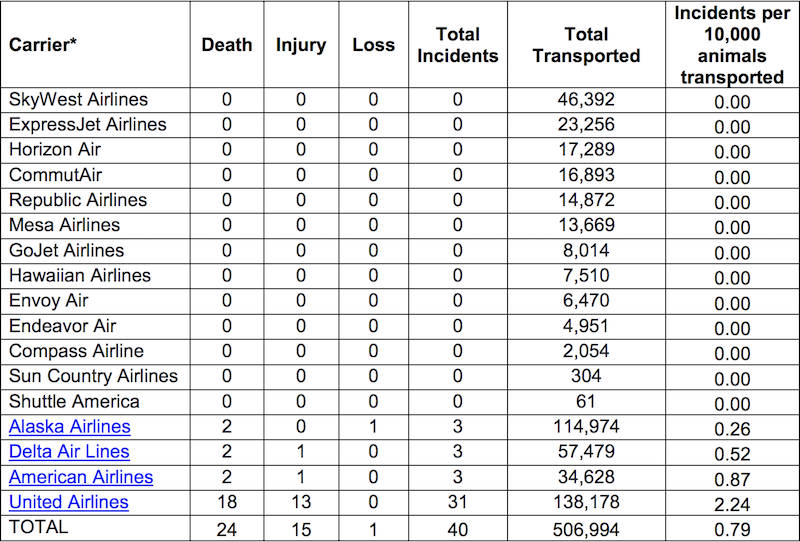 This includes animals that are transported in the cabin and in the cargo hold. Ironically, United’s pet transport program is called PetSafe, though based on their performance it’s anything but…

(Tip of the hat to AlexS)

The issue with the disparity in numbers isn't because of under reporting, it's because of company policy. All airlines are legally required to report and get charged incredibly hefty fines if they don't. Trust me, they'd rather put it on a report that almost no customer ch3cks than pat a fine. Almost all of these airlines, besides UA, have strict regulations on what they will or won't accept for their flights. AA doesn't accept any snub nosed dogs, full or mixed breed, at all. No exceptions. They also have the strictest temperature restrictions. DL does accept some snub nosed breeds, but they have specific temperature restrictions. UA has the least amount of restrictions, hence they absorb a large portion of the market, which is a greater margin of error. It's still unacceptable. Also, while I don't recommend shipping a pet on a flight, mostly because it's very stressful for themn sometimes people just don't really have an option. It's sometimes not feasible if you have to move cross country, to an island, or internationally.

It sucks that this happened to poor Kokito and the flight attendant should face discipline. But, saying it's unsafe to send a pet with the luggage on United is a bit of a stretch. The DOT tracks all reported injuries and deaths of pets in the cargo compartments of US airlines. Here's the link with the report on each of those injuries and deaths. This can be found just by clicking the airline's name on the page that @lucky posted. Saying it's unsafe to send a pet on United is ridiculous....especially after skimming through these reports. 18 out of 138,000+ is too small of a number to make a fair comparison to other operators. I think United also allows more breeds of cat and dog than other airlines to ride with the luggage. https://www.transportation.gov/sites/dot.gov/files/docs/resources/individuals/aviation-consumer-protection/304356/unitedredacted2017.pdf

Mark G. How do suppose someone should transport a pet if they're moving overseas then. Put them on a boat? Make them swim? Just say "sorry goodbye" and get rid of the pet?