Update: Nearly 27 hours later, passengers and crew have returned to Newark. A few blog readers were on the flight, so be sure to read the comments below for some “fun” details of the experience.

Well this flight certainly wins the “awful diversion of the day” award.

Yesterday’s United flight UA179 from Newark to Hong Kong is currently stranded in Goose Bay, Canada, and passengers haven’t been allowed off the plane.

The flight left Newark at around 3PM local time yesterday, and started the journey to Hong Kong. The flight was nearing Greenland when they had a medical emergency, so they made the decision to divert to Goose Bay, Canada.

For what it’s worth, Goose Bay gets a fair number of diversions, especially for transatlantic flights, both for medical and mechanical reasons (we’ve even written about a United Goose Bay diversion in the past).

The plane landed about 11 hours ago, but passengers are still stuck on the plane in Goose Bay, and haven’t been let off. 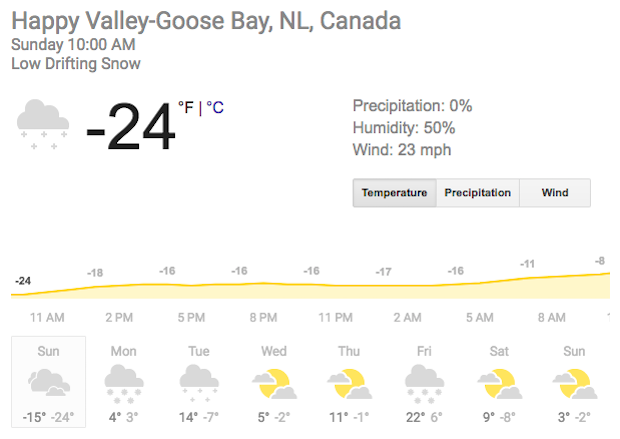 While the initial diversion was due to a medical emergency, they then started having issues with one of the plane’s doors, and as a result haven’t been able to depart.

Even if the plane didn’t have that issue, this would have been a tricky situation. Pilots and flight attendants have maximum hours they can work, and at this point they would have exceeded the limit if they continued to Hong Kong. However, presumably they could have returned to Newark or another major airport, but like I said above, the plane isn’t able to fly.

I’ll be curious to see where United flies passengers from there. I’m guessing the plan is to fly everyone back to Newark, in which case it will have been a 24 hour flight to nowhere. I doubt they’d be able to continue to Hong Kong based on the new crew potentially timing out, but I could be mistaken. I imagine whatever they’re going to do when the rescue plane gets there will take some time.

This is so incredibly bad. UA, this is the all time worst customer experience I have ever had. Shame on you. Stranded for 12 hours… pic.twitter.com/Q13vIW9ejF

Was anyone on yesterday’s UA179 who can share a firsthand report of what happened?

I was on this flight. Finally back from my trip to China and available to comment. We were on the plane for 27 hours only to end up right back where we started. And then we still had our 16 hour flight to Hong Kong after that. So when I read a comment like the following I need you to know that you are minimizing the situation greatly. And as it would happen, our next flight was also delayed and we were kept on the plane for several extra hours again. Overall, not a good experience. Of course, the individual's health was a priority but United definitely could have (and should have) sent a rescue plane much sooner than they did. [email protected] says: January 20, 2019 at 10:54 am @WTF – I agree that it is not comfortable in economy, but why do you consider the passengers to be “imprisoned” in a “claustrophobic” situation when on the ground for 11 hours, as opposed to the scheduled 16 hour EWR-HKG flight they intended to be on?

Delta flight makes an emergency landing with an engine problem in a remote Alaskan island leaving passengers stranded for 11 hours onboard the plane but somehow that one does not make the headlines. Why is that? The same thing happened with the Dr. Dao incident. Delta had a passenger removed off the plane by dragging down the aisle just weeks before the Dr. Dao incident and not a peep. But UA has a similar story and all of the sudden... well, you know the story. https://www.seattletimes.com/seattle-news/delta-flight-from-beijing-to-seattle-lands-on-alaskan-island-due-to-engine-issue-alaska-public-media-reports/?fbclid=IwAR23XnZ-un_43IU6qBt4Ggs-9bl0QeZav4M9tsVgth-XOaN3W-0tgwBHaYo

Darwin Charles - Again, your point is stupid. While Americans are generally poor with Geography, I GUARANTEE that every American who visited Toronto for a weekend last year is aware that Toronto is in Canada, and that Canada is not Toronto. It is PERFECTLY acceptable to say that you are visiting a country, and not specify the city. What you "notice" Canadians generally do is utterly irrelevant - and not something I accept either. The vast majority of Canadians I speak to about going abroad say which country they are going to, not the specific city, especially when it's an obscure place like Goose Bay which virtually no-one has ever heard of...