When traveling, I take a very different approach towards photography than most people. I meticulously photograph every aspect of my flights and hotels, and then when I actually sightsee I leave my Sony RX100 camera behind.

Of course that’s simply because I primarily write trip reports about airlines and hotels, so documenting those experiences is my priority. I’ll often take 300-400 pictures per flight, and then narrow it down to ~20% of those to include in trip reports.

When I am actually sightseeing, I quite value not constantly taking pictures, but rather just being able to take things in. For me that’s relaxing, and makes me feel like I’m not “working” (not that I mind my “work” one bit, but everyone needs to unwind once in a while).

So I’ll almost never walk around with my camera while sightseeing, for a variety of reasons:

Of course I expect others will feel differently about this, but that’s just my perspective.

We took a touristy river cruise in St. Petersburg this morning (more for the views, rather than the narration), and I was fascinated by the different photography techniques people used. You had people using point-and-shoot cameras, professional cameras, and phone cameras. 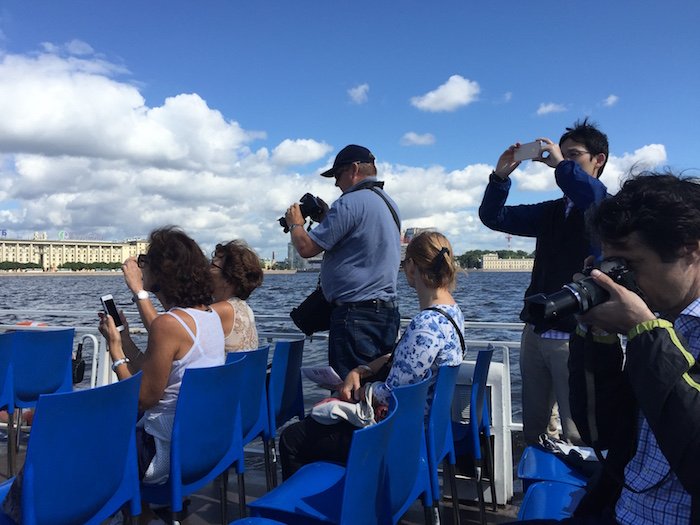 What blew my mind is how many hundreds (if not thousands) of pictures some people were taking. Yes, St. Petersburg is a stunning city, but I also figure someone with a fancy camera likely has at least somewhat of an “eye” for photography, and knows when they’re seeing something picture worthy. Some people seemed to be snapping so many pictures that I wondered if they even saw what was going on, or if they were just planning on going back and looking at it later.

I get some people are either amateur or professional photographers, so totally get why they may have been taking so many pictures. But for the average person…

I’m by no means claiming that my strategy is right, but personally I use my iPhone and maybe take an average of 15-20 pictures per day if sightseeing. I don’t stop every six seconds to take picture, but rather only take them if there’s something truly amazing.

What’s your approach to travel photography? Do you use a phone, professional camera, or point-and-shoot camera? How many pictures do you usually take per day?

I travel mostly for business, so iPhone and RX100 have become permanent items in my carry-on bag. I will carry my DSLR when I know I want to explore more at the locations. For example, Rome, Venice, Florence, Safari, Istanbul. When vacationing with family and kids, iPhone and Rx100 are more than enough. I read about the latest Huawai Phone has Leica lens and may consider getting one to replace my IPhone (wifi problem since updating to IOS 6.x) to see how far cell phone photography has advanced.

I recently completed a coast to coast trip of USA. Before starting I was wondering I should buy a DSLR for the trip or at least borrow one from a friend. Then I decided I would take pictures with my iPhone 5S in the first two weeks (I was spending that time with my sister in Orlando) and then upgrade my phone to SE (13 mp against 8 mp for 5S) if my pictures do not reach my expectation. When I took some pictures and posted in Facebook I found them of reasonable quality. Since I would not be making big prints for any of them, I continued with my phone. During my visits to Chicago, New York and San Francisco, most of my pictures were of the skyscrapers. Other than that I spent my time taking in the views than on taking pictures. I missed a few opportunities of a reverse rainbow and a shadow of my plane on a small cloud below, because I was not ready with my camera. Finally there should be a balance between pictures and enjoying the trip.

We Americans seem to be the most unpolite when it is about taking pictures. Majority standing up and keep on standing... No matter what... on a Ferry... on a boat tour... all the time. So the educated sitting people (also respecting the basic safety regulations)... have no chance to see anything at all. I mean, how rude can you be? Sometimes I'm wondering why we do not stand up in cinemas and theaters...