Obviously transatlantic flight speeds can never compete with the Concorde days, but in a subsonic era, we just saw some new records set last night.

New York to London in 4hr56min

As anyone in the UK knows, at the moment winter storm Ciara is causing some unpleasant weather on the other side of the Atlantic. Along with this we’ve seen a bomb cyclone form over the Atlantic, which is causing an incredibly strong jet stream.

Flight times can already be highly variable based on the time of year one is traveling, but winds across the Atlantic last night were on a whole different level.

BA112 from New York JFK to London Heathrow set a new flight time record last night. A British Airways 747 operated the flight in just 4hr56min. That flight is blocked at 7hr5min (which includes taxi time and a buffer), meaning that the plane arrived at 4:47AM, a full 1hr38min ahead of the 6:25AM scheduled arrival. WOW.

Virgin Atlantic wasn’t far behind British Airways, though. VS4 from New York JFK to London Heathrow was scheduled to depart at exactly the same time. The flight was operated by an A350-1000, and that plane completed the flight in just 4hr57min. It ended up arriving at the gate at Heathrow at 5:05AM, a full 1hr25min ahead of schedule.

Tail winds on both flights were as high as 265mph, and the planes reached maximum speeds of over 830mph.

For what it’s worth, the previous record for a New York to London flight was when Norwegian operated the route in 5hr13min in January 2018, recording a maximum speed of 776 miles per hour.

Purely in terms of speed on a transatlantic flight, Virgin Atlantic set a record in February 2019, when a Los Angeles to London flight reached a maximum speed of 801 miles per hour.

But British Airways won all the prizes last night, beating Norwegian’s record by 17 minutes, and also reaching speeds of well over 800 miles per hour.

I’d note that the time records are specific to the New York to London market, though there are most definitely still shorter transatlantic flights out there.

For example, last night Aer Lingus flew from Boston to Dublin in a flight time of 4hr49min, which is actually not that impressive when you consider that the flight is nearly 500 miles shorter (however, the 747 has a faster cruising speed than the A330).

The shortest regularly scheduled transatlantic flights are from Northeastern Canada to Dublin, though none of them operated last night.

While New York to London flights are notoriously short to begin with, operating these flights in under five hours is next level. They must have had under two hours between meal services onboard.

It’s so cool that they set this record, though I’m sure just about anyone traveling this route in a flat bed wishes they had just slowed down a bit so they could get more rest. Presumably most people aren’t in a rush to get anywhere at 4:47AM on a Sunday.

I wasn't on any of the flights mentioned above but I did fly back to London from New York a couple of hours later. One of the most insane flights of my entire life. We arrived early and the seat belt signs were kept on the entire time. I loved every second of it.

Back in the day when Concorde was in use and no-one was interested in subsonic crossing times I was on a Virgin 747-200 ex EWR to LGW. On taxi out the captain gave a short talk about turbulence. I gather it was quite rough but I'd had a tough couple of days of meetings and travel so I slept. Time from wheels off to wheels on was five hours ten minutes, the captain announced the time as we arrived at the gate. 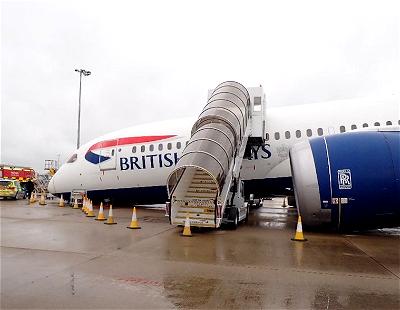