There’s no doubt that a lot has changed in the airline industry over the past several years, especially as it pertains to award availability. With airlines actually making money flying full planes with good yields, we’ve continually seen less and less award space.

This is especially evident with American Airlines. Going back a few years, they were by far the best airline when it comes to releasing award space on their own flights. Whether you were looking for economy, business, or first class, they released space to most of their destinations, including Europe, Latin America, and Asia.

As I wrote about last October, AAdvantage award space has taken a sharp turn for the worse, especially for travel to Europe. At the time, there was a single date in all of 2014 with first or business class award availability at the saver level. I get that airlines are less incentivized than ever before to release award space, but that’s kind of extreme. At the same time, I can’t totally blame them for not releasing much award space in advance, given that those seats could otherwise be sold.

Here’s what I’m less forgiving of, however. I was trying to get from London to New York today, and didn’t find much award space across the board.

Then I looked at the actual flight loads on American:

This route is operated by 777-300ERs with just eight first class seats. 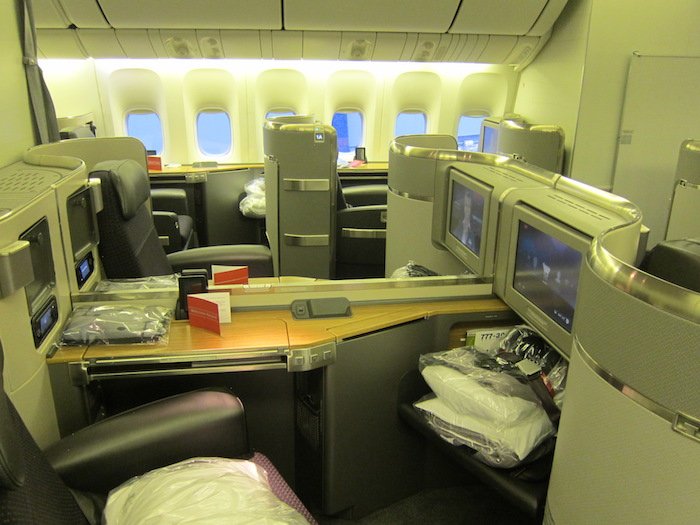 Then I had a look at the seatmaps for both flights, and not a single first class seat was taken on either flight:

Despite that, there wasn’t a single saver level first class award seat on either flight. They would sell you a seat for 175,000 miles one-way, though. 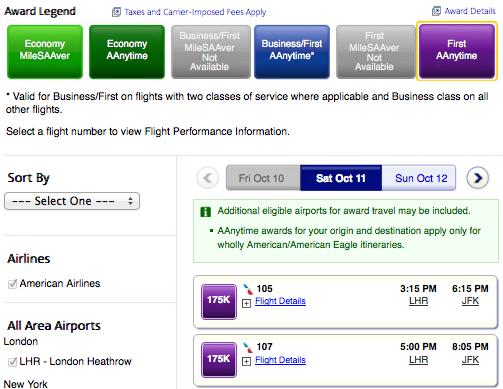 To me, this scenario is what I really take issue with. Unlike others, I’m fine with airlines not releasing award space in advance. I mean, of course I’d like them to, but I get from their perspective there’s a massive opportunity cost to making seats available when they could otherwise be sold.

But what I find unjustifiable is not making award seats available 12 hours before departure when the cabin is otherwise completely empty. That’s the biggest slap in the face to frequent flyers, in my opinion.

What has been your experience with American’s award space for travel on their own flights lately?

Really stingy, even when using miles and dollars to upgrade. They base priority for upgrades on elite status but take forever to post miles from previous trips that could bump up your status level, and on check in time, which they will not allow you to do in advance if you are flying the first segment on a partner airline. Ugh.

I'm an EXP with almost 2M active miles and can't get two Business Class seats from anywhere in the US to either MAD or BCN. My dates are for early May and I've been trying to get them since October. I now call AA everyday and still nothing.... The frustration is that some of the flights have 18/20 empty seats!!!! Truly makes me angry for having put so much time onto this airline!!!!

Amazing... And the trend worsens... Suddenly they've pulled the (very few) TATL sAAvers that existed for anything after mid-April next year. Zip-zero-nada on AA, but, BA has plenty...assuming you want to pay the exhorbitant surcharge (which I don't). More amazing... I was able to find the itinerary I wanted (LAX//LHR) using SkyPesos!!! Not only that... we're not talking single ticket in Y... we're talking family of 4 in Business/First on VS on way out and 2 in J, and 2 in Y on DL on way back -- during the month of July! And, yes, I'm talking DL saver level here. This is not the first time SkyPesos turned out to be superior that disAAdvantage miles for me. Getting from LAX to GRU and back for WC earlier this year had to happen with SkyPesos (using Korean Airlines). UA also had availability (although not direct). AA... not a single seat with exception of July 7th for some reason, (and only that day for each direction). Can not reiterate how frustrated I am with the disAAdvantage program...and when the gutted the program back in April without warning I was for a moment actually thinking 'hey, perhaps they'll open a few sAAvers now' -- yeah... silly me for thinking they'd show a courtesy.