South African Airways will be mixing up their US route network soon, as they cut flights to Dakar and increase flights to Accra.

South African Airways has two destinations in the US — New York JFK and Washington Dulles.

They take different approaches on these two routes, though:

Well, it looks like South African Airways will soon be mixing up their network.

As of next month, South African Airways will fly daily to Washington via Accra. This is coming at the expense of the Dakar to Washington route, which will operate for the last time on September 1, 2019.

Note that South African Airways is phrasing this as a “route suspension,” though without a date being named for when the route would resume, I think it’s questionable if/when that will actually happen.

With this change, Delta will be the only airline to fly nonstop between the US & Senegal anymore, as they fly 2x weekly from New York JFK.

So, what’s the motivation behind this?

Welcoming these developments, SAA’s Acting CEO, Zuks Ramasia, stated: “One of the key pillars of our strategy is to connect South Africa to West Africa and beyond to North America. Our partnership with Africa World Airlines (AWA) continues to deepen with these new schedules and benefits customers across the African Continent.”

Sean Mendis, Chief Operating Officer at Africa World Airlines, is in agreement: “Expanding our co-operation with SAA means that passengers can enjoy quick and seamless connections between AWA and SAA flights in Accra’s new Terminal 3.”

The service via Accra will continue to operate with the following schedule:

While fairly niche, there is an interesting award travel angle here. The discontinuation of the Washington to Dakar route means the end of a great award chart sweet spot. Virgin Atlantic Flying Club is partners with South African Airways. 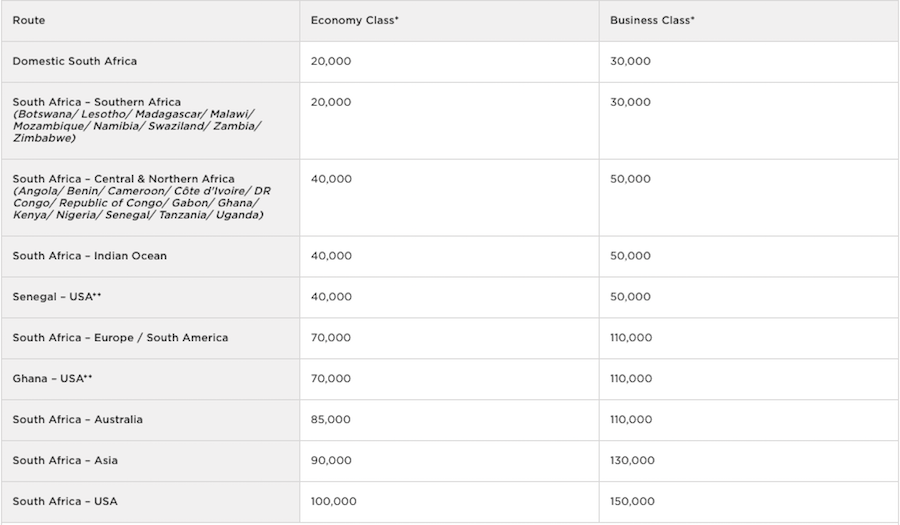 With South African Airways “suspending” their Washington to Dakar route, nonstop capacity between the US and Senegal is being halved, as only Delta is flying 2x weekly between New York and Dakar at this point.

The most interesting part of this from my perspective is to find out that an FT old hand is now COO at AWA!

What about SAA nonstop from Atlanta to Senegal? My daughter loves SAA more than Delta. Its like college homecoming!