When people think of Singapore Airlines, the first image which comes to mind is probably that of the iconic Singapore Girl.

Some may say it’s sexist, and it’s certainly true that Singapore Airlines has rules about appearance, height, weight, gender, etc. But at the same time, it’s amazing that even in the 21st century they’ve been able to keep such an iconic “face” to their brand.

To this day, Singapore Airlines’ advertising is consistently centered around the Singapore Girl, as we saw in their 2013 “Understanding Your Needs” ad campaign:

Despite having fantastic hard products in Business Class, First Class, and Suites Class, they’ve decided to center their advertising around their soft product, which says a lot in this day and age.

Which brings us to an awesome documentary which recently aired on Channel NewsAsia about the Singapore Girl. Not only does it get into the history of the Singapore Girl, but it actually reunites five of the ladies who appeared in Singapore Airlines’ first Singapore Girl themed ad campaigns.

To put into perspective just how awesome and sassy this is, here’s a picture of the ladies now: 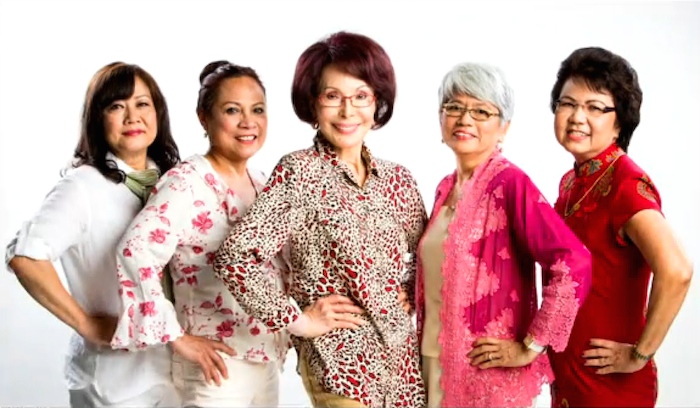 As a fan of Real Housewives of Atlanta/Beverly Hills/New Jersey/New York/Orange County, I guess you could call this episode “Real Aunties Of Singapore,” minus the drama, of course.

It’s an incredible story, especially since the five ladies live all over the world now, from Canada to Germany to Singapore. And it really gets at the core of what Singapore Airlines service is all about.

Truth be told I don’t think Singapore Airlines service is quite as good as it once was, and I know that many senior crews at Singapore share that sentiment. Work ethic nowadays isn’t what it used to be across the board, and that’s evident with the incredibly precise job of Singapore crews.

(Tip of the hat to Carolina Travel Girl)

@tara I thought it was a little rude to call the Kebaya a geisha spin-off especially because it has been around since the 15th century and is an icon to Singapore and other countries such as Malaysia and Indonesia. You couldn't be further from the truth with all your other remarks as well. Perhaps it's your personal opinion but then again its not a very reliable one seeing that you gravely overlooked an important factor which I just rebuked. The Singapore girl is not merely some hollow shell or the Asian version of the dumb blonde stereotype. They are handpicked and are trained for 4 entire months- the most in any service industry in the entire world. You bet your ass will be in safe hands in an emergency with all these educated ladies. Since the introduction of the Singapore girl decades ago they have been marketed as the epitome of Asian hospitality offering great service and served have they! You would be glad to know that Singapore is the first country in Asia to do away with misogyny. It now lies on the top of ranking in gender equality.

My better half works for SIA so I know the company inside out. There is no doubt whatsoever that SIA still has THE best soft product in the world. I have flown with ALL European airlines (where service us erratic), Qantas (where crew addresses you as 'mate' as if we had known each other forever) and Middle-Eastern carriers (which predominantly hire staid Filipino and eastern European staff)... SIA still has the best groomed, and the most pleasant on-board passenger attendance in the world. The quality of the hard product probably went down slightly over the years due to cost cutting, but the soft product is as good as before. Whoever says the contrary has not taken the airline or is lying. Plus, SIA pays very well, offering one of the best total compensation in the world, for crew and pilots alike. I can tell you that most staff are still proud to be part of the airline.

Wallpaper Magazine has done a nice write up on the history of the Singapore Girl and her fashionable Sarong Kebaya uniforms. A true design classic that embodies all aspects of the Singapore Airlin.