I’m off to Jordan later this year, and while I was looking at Amman’s Queen Alia Airport Wikipedia page to determine how to get out of there, I came across something interesting that I was unaware of.

While it is already flying a sole route from nearby Paphos, Cyprus, on October 29, 2018, Ryanair will commence flights from a further nine European airports to Amman, Jordan.

The European destinations include: 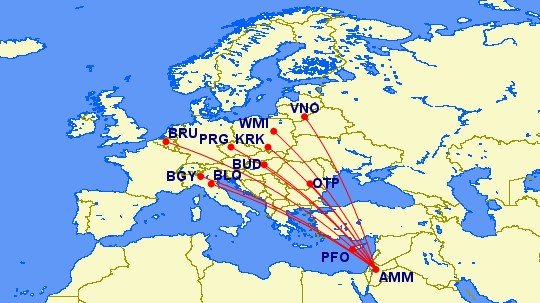 It will also be launching flights from four European airports — Athens, Cologne/Bonn, Rome Campiano and Sofia — to the Jordanian city of Aqaba.

I note that Ryanair does already fly to Israel, but I believe that is their only other destination in the Middle East.

As you might imagine, Ryanair’s entry dramatically lowers prices.

There are several things I find really interesting about this:

Perhaps the Jordanian Government believes there is so much potential for tourism in Jordan to grow that they believe both carriers can co-exist. I’ll be watching with interest to see what happens when and if they compete on the same routes, especially from London, which is Ryanair’s biggest hub.

Yes, both airlines have different products and business models and (currently) target different customers. And I don’t tend to actively seek out Ryanair flights over three hours because they’re not exactly comfortable. But Ryanair can offer such absurdly cheap prices that they will have no trouble taking passengers from Royal Jordanian.

Would you fly Ryanair to Jordan if the price was right?

Yes, of course I would fly them, RJ is a bargain for everywhere they fly EXCEPT Jordan ( as is the case for home ports for most carriers). I hope you are including Petra on your trip; it would be a big mistake to miss it. Breathtaking place. In a previous life, I used to drive from Damascus to Amman ( or mostly be driven), sadly no longer possible and maybe decades before it will be again.

@Lumma - LHR-AMM is operated by a special a320 with flatbeds in J and WT in the back.

Haha for a dorm talent show at my university I did a "cheap flights" act where I booked their PFO-AMM flight for $2.45. The reactions I got were priceless! It'll be interesting to see how this route holds up, and I'm really curious to see if Wizz Air follows. Surely if they can support flights like BUD-TSE and SOF-DWC they can attract quite a market for Jordan. Time will only tell!