In India we first visited Aman New Delhi, then Oberoi Amarvilas, and then Aman-i-Khas. After that we went to the Maldives (which I’ll cover in the next installment), and on our return we had to spend one night in Delhi before continuing to Amanbagh, given that it was a four hour drive and we only arrived in the evening.

For that night we stayed at the Oberoi Gurgaon, which is in New Delhi only 15 minutes from the airport. The friend I was traveling with is a travel agent, and in the interest of full disclosure the stay was comped. That being said, that’s because he’s a travel agent  and he/his agency work with a lot of Oberoi properties, and not because I was going to review the place, and I don’t even think they knew I’m a blogger. That being said, rates at this hotel usually run around $300USD per night.

Anyway, we arrived early in the evening and the entrance has to be one of the most impressive anywhere, with torches in the center of the driveway (the views are much better during the day on the drive up, as shown in the pictures at the end of the report). 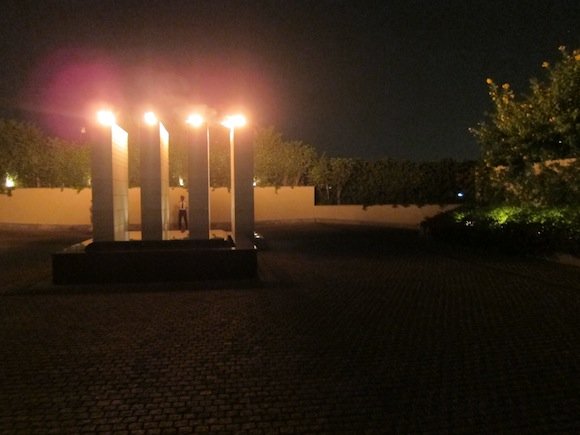 This hotel was brand new at the time, and it shows. The decor is super-modern and chic. 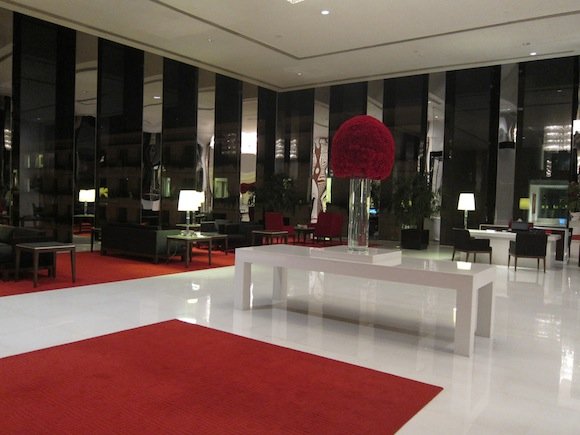 Within minutes we were checked in and escorted to our rooms, which were on the third floor. 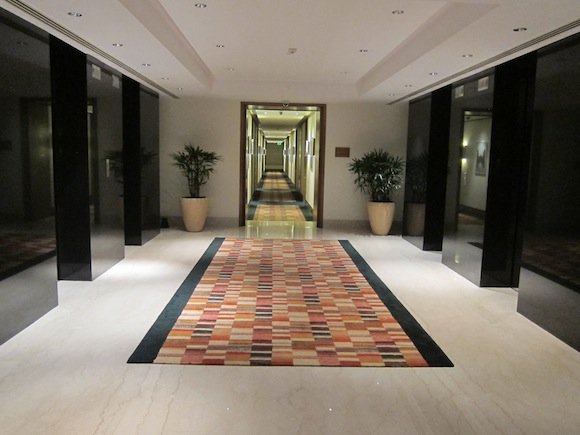 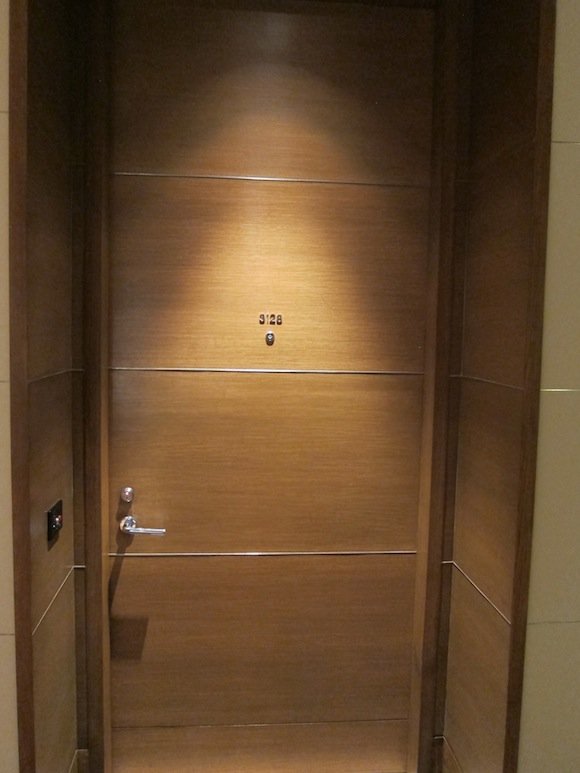 The room featured a king size bed, flat screen TV, and sitting area. It almost felt like a junior suite, despite being their entry level room. 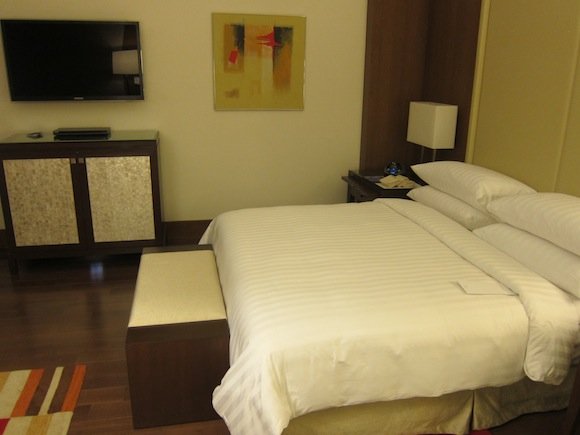 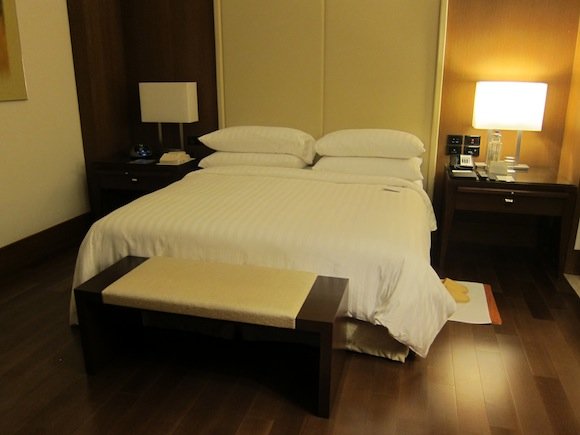 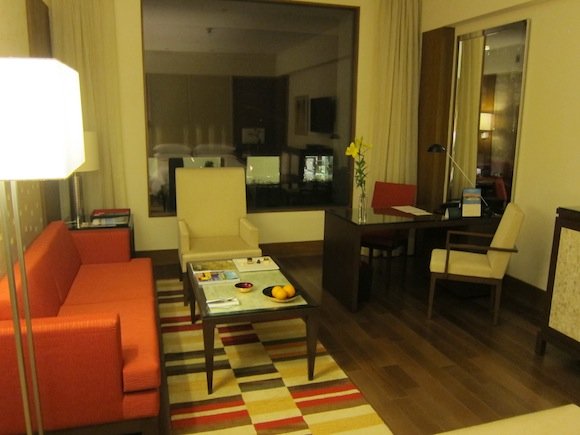 On the table was a welcome amenity consisting of some fruit and chocolate. 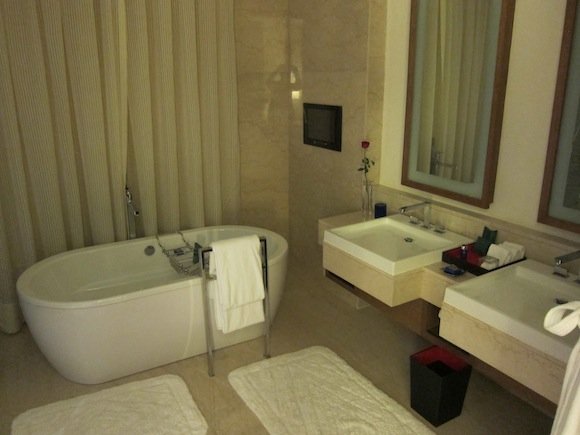 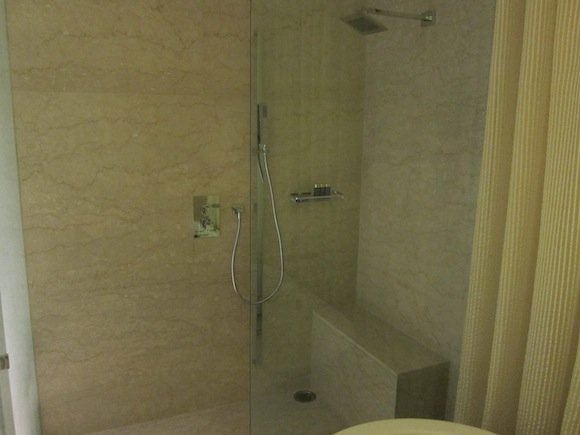 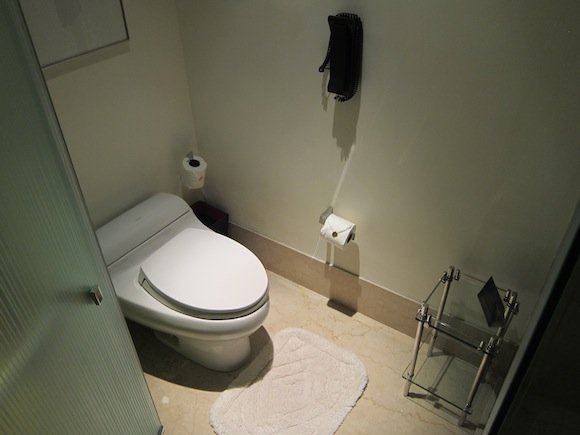 There was also a fairly large closet for bags. 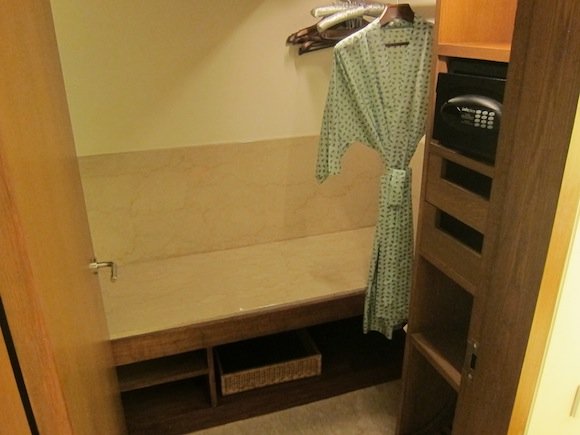 Within minutes of checking in the butler came by to introduce himself and offer a cold towel and refreshing drink. He asked if I needed assistance with unpacking or with anything else, which I declined. 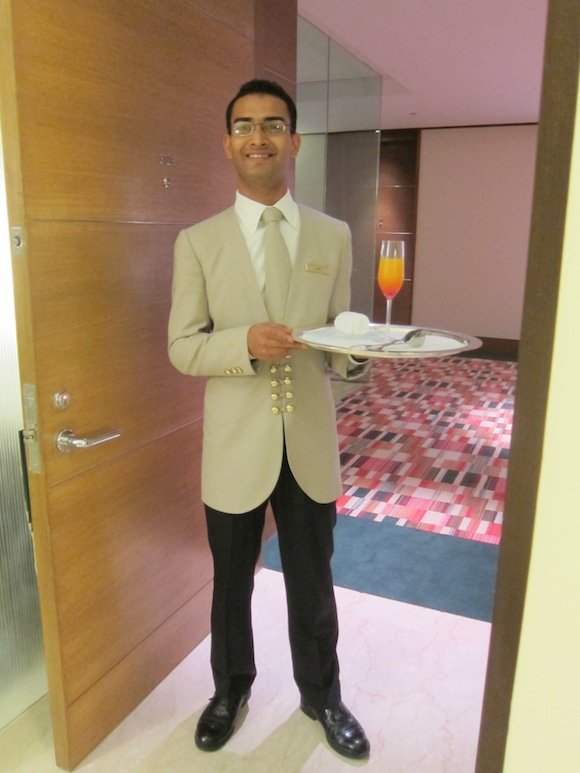 It’s kind of sad that our stay here was just a quick overnight, as it was a spectacular hotel. I spent most of the time sleeping, though in the morning we had breakfast in the hotel’s restaurant, which is easily one of the top 10 hotel buffets I’ve ever seen. While it wasn’t quite as large as some of the mega-buffets I’ve seen, the quality was top notch. 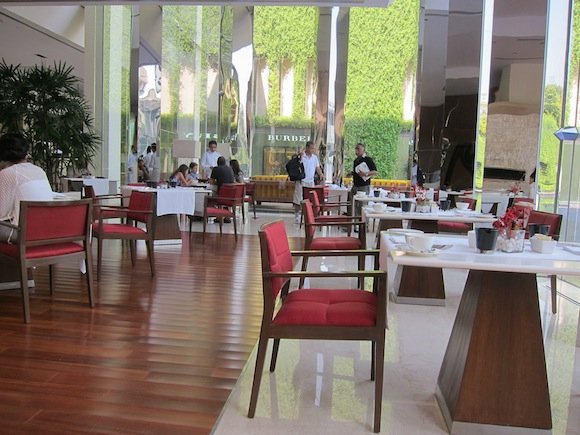 The buffet was extensive, though they also had a menu off of which you could order hot dishes. 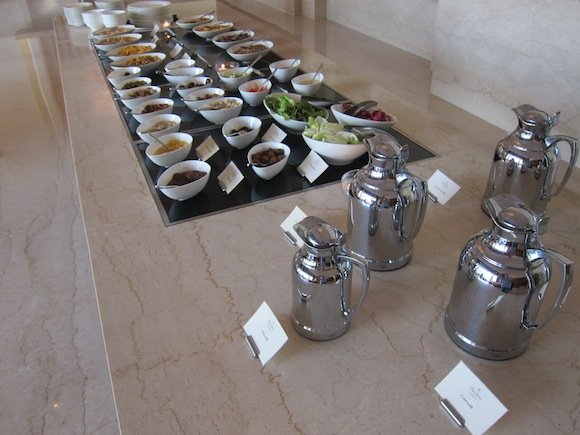 Hands down the highlight of the breakfast had to be the freshly baked croissants. As soon as they came out of the oven the chef came by each table to offer croissants, and they were amazing. 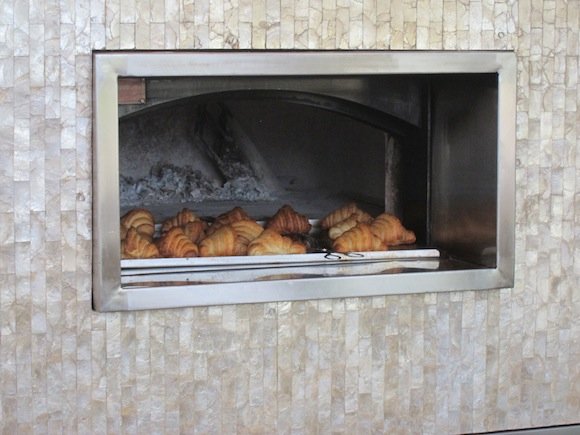 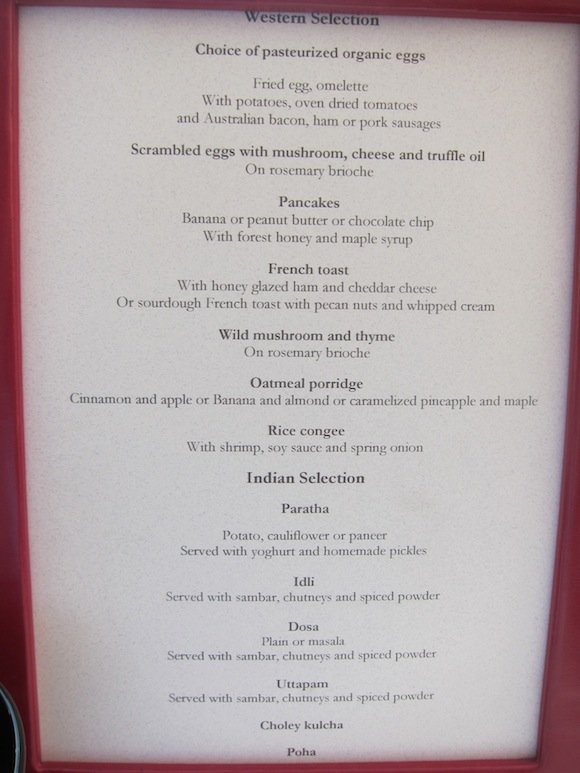 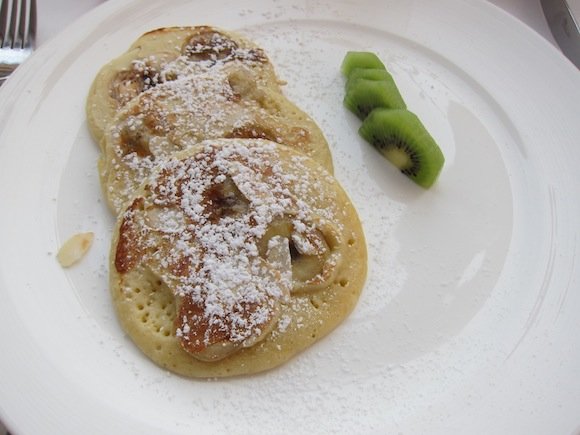 After breakfast we had the opportunity to see the hotel in daylight, and it was even more beautiful during the day than at night.

Walking to the lobby

As you can see in the picture below, to the left is the lobby building with restaurants, which overlooks a pool/pond. On top of the greenery on the far end of the picture is the hotel’s driveway, so the views are amazing driving in. 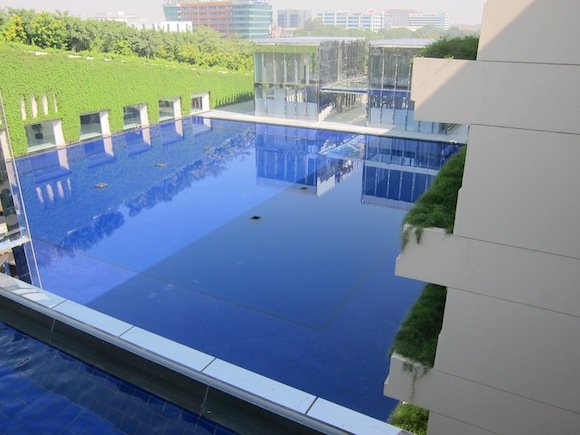 And while I didn’t have a chance to use it I did manage to check out the gym, which had top of the line equipment. 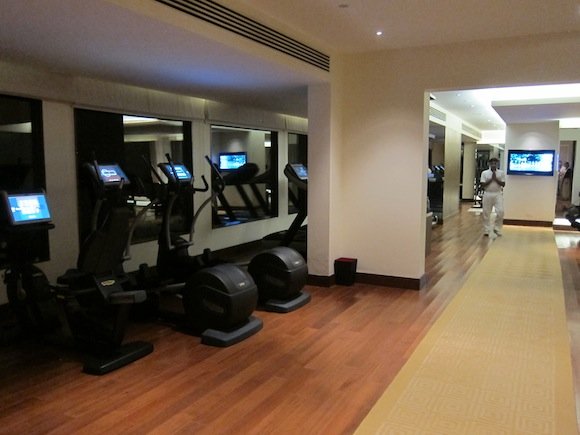 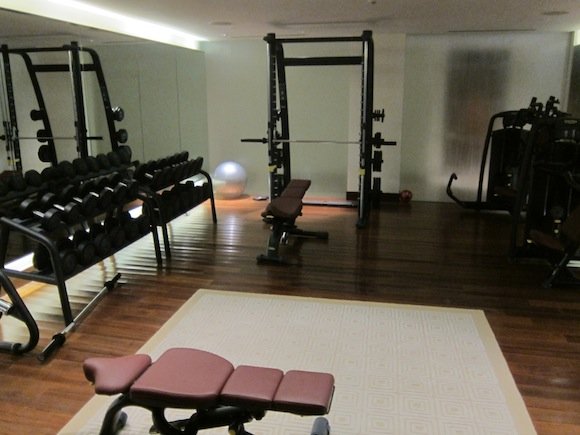 Every single employee I interacted with at this hotel was extremely friendly and polished, though I found that to be the case at every Aman and Oberoi I stayed at in India.

Hey lucky, I was wondering if this stay was part of a trip report because I would love to read it. Cheers 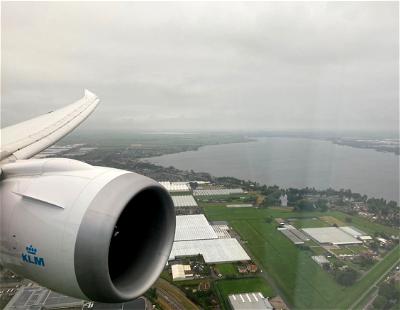