Singapore Airlines premium passengers are in for a treat, as the airline has greatly expanded its free Wi-Fi benefit, as noted by Mainly Miles.

Singapore Airlines increased the list of passengers and aircraft types where free Wi-Fi are offered. Specifically, the airline is now offering unlimited free Wi-Fi to the following passengers:

For context, previously the airline offered unlimited free Wi-Fi in Suites and first class, while it offered business class and PPS Club members 100MB of free data. Suffice it to say that going from 100MB of data to unlimited data will make a big difference for many passengers. Furthermore, previously the airline had restrictions on the types of aircraft where free Wi-Fi was offered.

For now the current Wi-Fi offering is described as a trial, though there’s no published end date. In a statement, the airline says it will “monitor and assess the needs and preferences of our customers during the trial, and evaluate the commercial, operational and technical aspects of providing complimentary in-flight Wi-Fi to our customers.”

Singapore Airlines has come a long way with Wi-Fi

As is the case with so many airlines, Singapore Airlines has made huge progress when it comes to its inflight Wi-Fi offering. The airline used to have OnAir Wi-Fi, which was both ridiculously slow, and outrageously expensive (in 2014 there was a story about how someone racked up $1,200 in Wi-Fi charges on a flight).

Not only has Singapore Airlines upgraded its systems to improve bandwidth and speeds (most planes now have Panasonic Wi-Fi), but the airline has also greatly improved Wi-Fi pricing and complimentary offerings. Nowadays most Wi-Fi pricing allows unlimited data, and a full flight pass typically won’t cost more than $15.99.

Meanwhile it’s fantastic to see that Wi-Fi is now free for most premium passengers with no data caps. That’s a real competitive advantage, as there aren’t many airlines offering free Wi-Fi to business class passengers.

Singapore Airlines is now offering unlimited free Wi-Fi to all first and business class passengers, plus PPS Club members in premium economy or economy. Officially this is a trial without an end date. It seems that the airline is trying to move toward making this a permanent feature, which would be awesome.

What do you make of Singapore Airlines’ expanded complimentary Wi-Fi?

It's good news, however the more people on wifi the slower the speed. Those who pay for F or J class deserve the free wifi. Will see how it goes in less than 2 weeks from when I last flew a couple of years back. A Boingo subscription was also a good option - always had free wifi with that anyways.

Absolutely brilliant, SQ does it again!

This feels like hotel wifi in the way that you can get it for just being a member. Even if you don't accrue points with the carrier so in effect almost nobody will really be paying. Hope their technology and internet speeds will be able to cope. 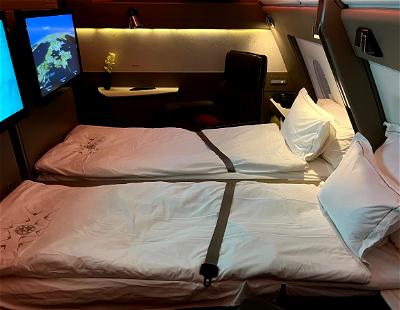