Let me take you back to where this booking adventure began.

Reason for the destination

As some of you may recall I gave away 60,000 Starpoints earlier in the week courtesy of the Starwood American Express. This was in conjunction with my stay at the St. Regis Bal Harbour a few weeks ago. I really love St. Regis hotels, given that they’re not only on the same level as Ritz Carlton and Four Seasons, but also belong to one of my favorite loyalty programs, Starwood Preferred Guest. While I was running the contest I noticed that a lot of you said you would redeem the 60,000 Starpoints at the St. Regis Mauritius. I hadn’t really looked into the resort before that, though the entries made me take a look. As it turns out, it’s opening on September 15, 2012 (though they only seem to be accepting reservations from October 1 onwards) and looks stunning. 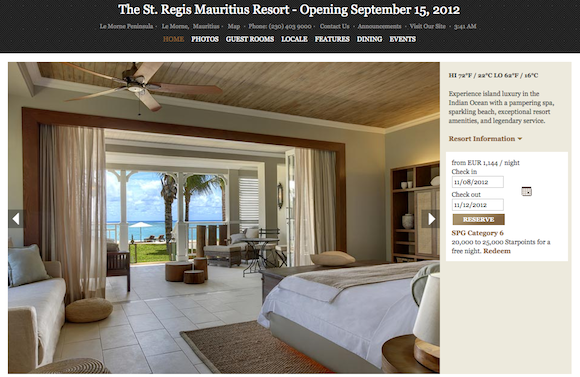 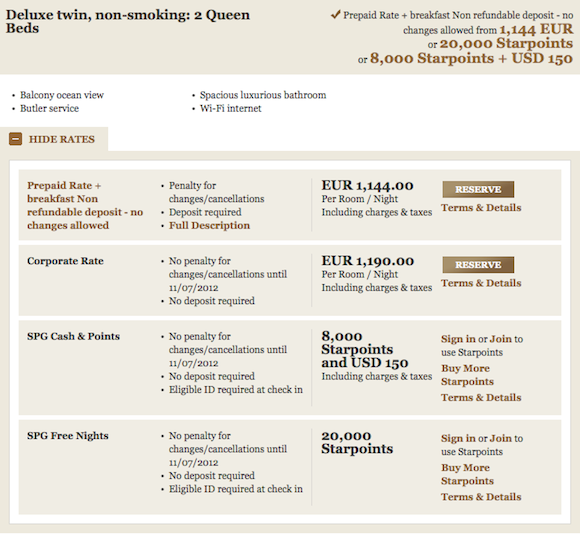 Will my SkyMiles finally be useful for something?

Then the challenge was getting there. Initially I thought this would be a great opportunity to redeem some Delta SkyMiles (in place of a potential trip to Asia). The plan was to fly the Air France/Air Maritius codeshare service between Paris and Mauritius, and to get to Europe on KLM in one direction and Alitalia in the other direction. My goal is to review as many new airlines as possible for you guys, and that seemed like a nice way to do so.

Unfortunately I literally couldn’t find any business class award space from Paris to Mauritius. Oddly enough ExpertFlyer actually showed some business class award space, though Air France’s website didn’t show the same space. When I called Delta they didn’t see the space either, even after trying to manually request it. So it seems that ExpertFlyer is showing some space that isn’t actually bookable via Air France or Delta. I’m not sure why, though I’d love to hear theories.

No dice with Air France!

As tempting as it is to do another award on one of the “premier” Star Alliance airlines, the reality is that I’ve flown them all and I get just as much enjoyment out of sharing a new experience with you guys as I would getting pampered in first class on Lufthansa. So once you rule out most of the Star Alliance carriers that offer a first class cabin — ANA, Asiana, Lufthansa, Singapore, Swiss, Thai, etc. — you’re left with the less exciting airlines. So the goal was to use 110,000 US Airways miles (the number of miles needed for roundtrip business class to Africa) to book an award exclusively on airlines I’ve never reviewed before. After much back and forth I came up with a routing on Ethiopian Airways, South African Airlines, and Brussels Airlines, as follows:

Let me explain the longhaul segments:

Should I do it?

I have the ticket on a three day courtesy hold, so let me know in the comments section whether or not I should pull the trigger on this, or if there’s anything you’d like me to change about the ticket to make it more interesting for you guys. For the last segment, for example, I could fly Austrian, Brussels, or SAS, and I went with Brussels since they’re the only ones with a fully flat product. I’d love to hear if there’s anything you guys would change, though. Or am I totally nuts for even considering this, and I should instead spend the money to get a mental evaluation?

And one last question — has anyone been to Addis Ababa? Is it safe? I doubt I’d ever return, so I’m tempted to have a stopover there for a couple of days. Is it safe to just roam around on the streets there, or should I just skip it and avoid giving my mom a heart attack?

I love Austrian -- their food just can't be beat. It was as good as LH F! It's a neat product that's become super hard to find lately. I'd basically given up on flying OS J again.

"They have never particularly impressed me, but they’ve never totally let me down either!" They let a bunch of passengers down, straight into the Mediterranean Sea, not too long ago... http://en.wikipedia.org/wiki/Ethiopian_Airlines_Flight_409

@lucky, I'm based in Seattle, do I fall into that "sometimes" category? LOL. By "sometimes," do you mean sometimes the UA agent would allow me to go through Asia? or sometimes the website would price out a stopover in Asia?