Hello from Kathmandu, Nepal! Yesterday I flew Korean Air’s 777-200 business class from Seoul Incheon to Kathmandu. While I’ll have a full trip report soon, I figured I’d share my initial impressions of the experience.

The first thing that makes this flight unique is that it’s operated by a three cabin 777-200, though Korean Air doesn’t sell first class on this route. But it gets weirder than that.

I asked about the possibility of assigning a first class seat at check-in, though I was informed that my fare class wasn’t high enough. I was on an award ticket, so I suspect they’ll only let revenue passengers snag the seats, even though the service is identical. 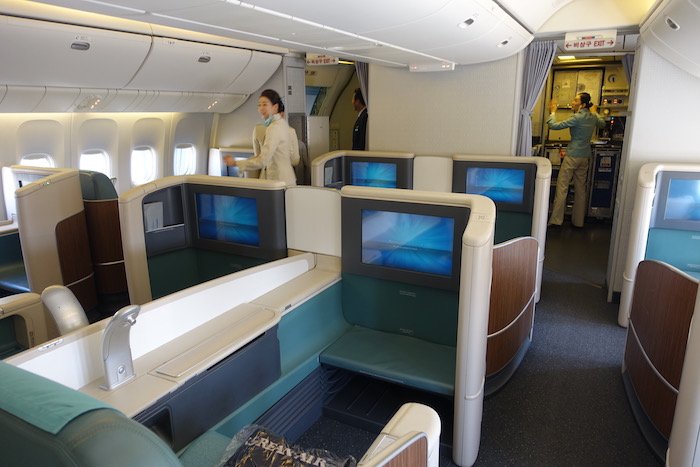 The business class cabin consisted of seven seats per row, in a 2-3-2 configuration. There were two rows between doors one and two (which were the ones being sold as business class), while the two rows behind row two were used for economy passengers. 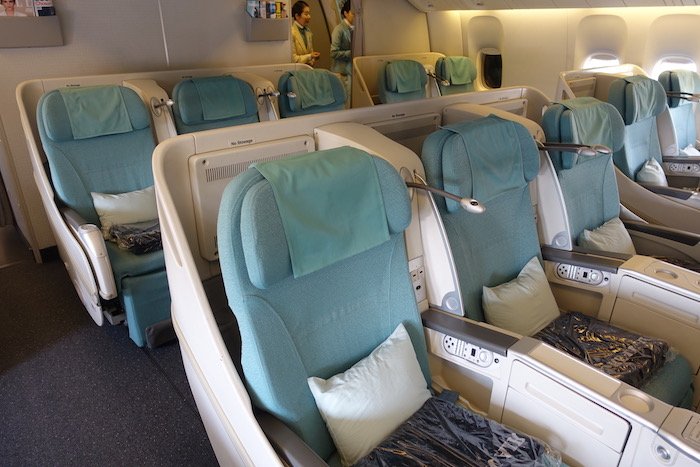 As I explained yesterday, despite the flight covering a distance of under 2,500 miles, the flight time was 7hr45min. You can see yesterday’s post for the explanation of why the flight was so long — interesting stuff. 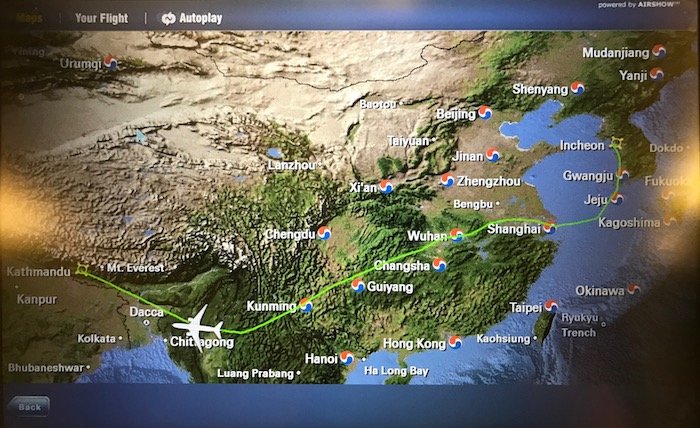 After takeoff lunch was served, which had a similar format to the meal we were served the previous day from San Francisco to Seoul.

Service began with a roasted fig tart with feta cheese and tomato salsa. 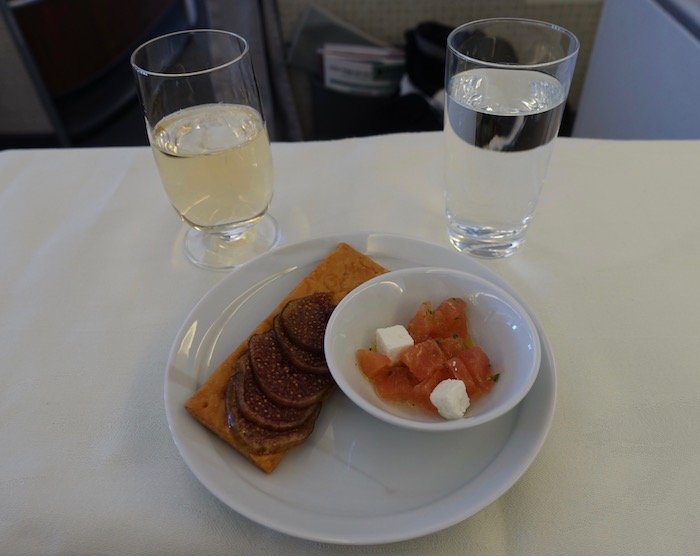 That was followed by an appetizer consisting of a mixed green salad with shrimp, along with some garlic bread. 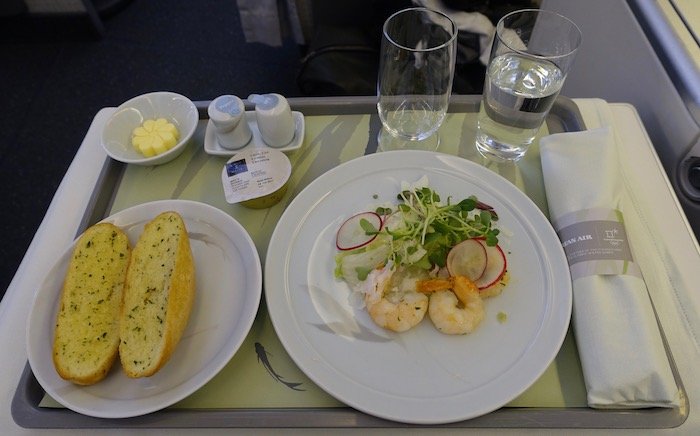 Then there was a broccoli cream soup. 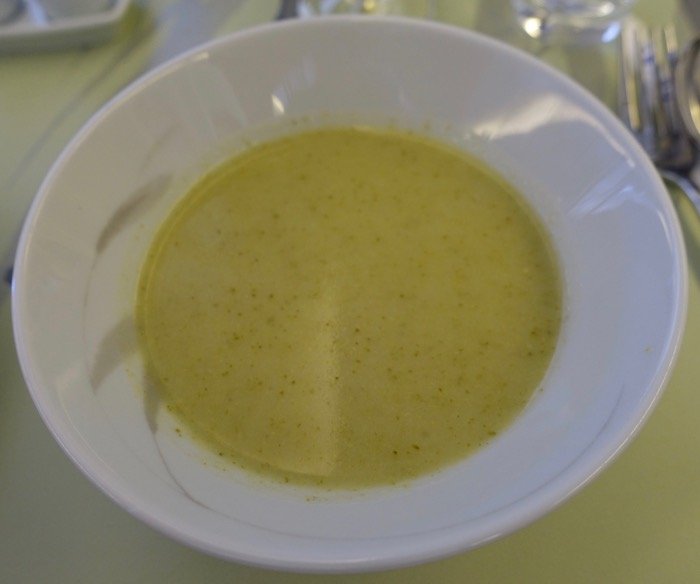 For the main course I selected the cod with pesto cream sauce, roasted potatoes, and vegetables. The dish was really good, surprisingly. 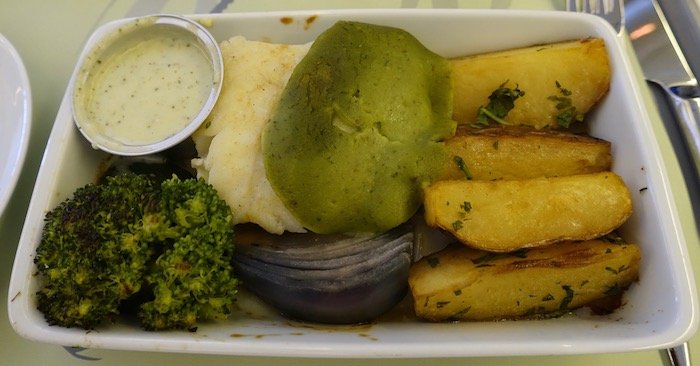 For dessert there was the choice between ice cream and fruit.

Then about 90 minutes before landing a roast beef sandwich was served (which wasn’t so good).

Service throughout the flight was excellent. The flight attendants were attentive and friendly. However, I guess that’s pretty easy to do when there are just a total of nine people in business class.

Even though this was a daytime flight leaving around 1PM and arriving around 6PM, I was tired. We had only flown in from the U.S. the day before, so we were still adjusting.

I didn’t think I’d be able to get much sleep, since I knew the seats were angled, and figured the angle would be substantial enough to make the seat uncomfortable in the reclined position. However, I was happy to find out that wasn’t the case. While the seat is angled, it was similar to the angle in business class on the EgyptAir 777, which I still found comfortable for sleeping.

So while it’s not the widest seat out there, I got a solid four hours of sleep, which was great. 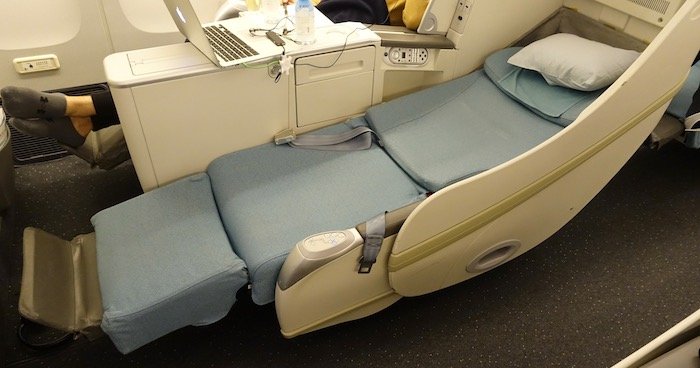 The flight was smooth (despite the strong headwinds and routing), and the views on descent were interesting. 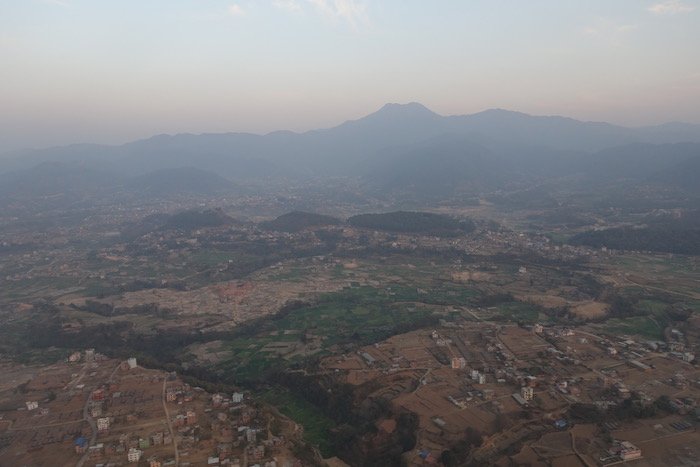 Kathmandu Airport is pretty small and doesn’t have any jet bridges, so we deplaned by stairs. The 777 is so big that it almost seemed out of place at the airport. 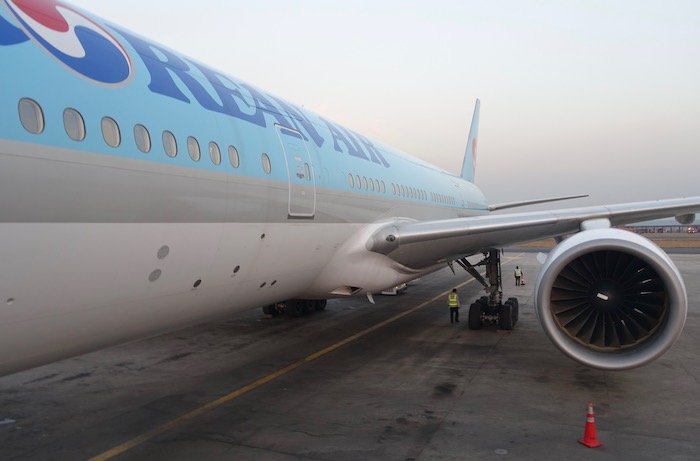 Overall our Korean Air flight was excellent. While the flight was much longer than I was expecting, that turned out to be a blessing, because I managed to get some real sleep. The Korean Air 777 business class seat is much more comfortable than I was expecting as well, so I wouldn’t hesitate to book it for a longhaul flight. Do keep in mind that many Korean Air 777-300s feature the Apex Suite in business class, which is top notch.

Those seats are better for sleeping than they look. My main gripe is a lack of a lidded storage area for nightstand stuff like your glasses. That little narrow open pocket is one klutz handed slip away can from something small going down inside the seat pod and being impossible to retrieve. I find food is meh on KE J especially if you are unwilling to risk the Korean option due to delicate constitution. But the cabin crew, if you can understand them, are always immaculate and delightful. The personal 'thank you' at the end of the trip caps it off. Roll on an Apex suite window segment.

flynforfun = Credit under a different name?

I had the same catering, identical dishes flying ICN-SIN last week. Instead of the Western dish I opted for the bibimbap, which was delicious. I've had bad bibimbap in KE J before, so I was wary. This time it was much better. Despite the catering being good, I have found Korean to have a very overrated airline. The lounges are horrible throughout the entire network. The flight attendants, while selected to be beautiful young Korean girls in nice uniforms, are a little unpolished/untrained on service. Drinks are always room temperature or warm, even the Champagne. The hard product in business is also extremely mediocre and in terrible configurations, outside of a few like the Apex suite (which is only good if you have window!). While F availability is nice for people with a million hoarded miles, J has been consistently underwhelming for me on them.