I’m flying from Seoul Incheon to Kathmandu today. I had mapped out the flight when I first booked this, and noted that it covered a distance of 2,469 miles.

When flying a route for the first time, I typically compare it to a route I take more frequently in terms of length. I thought to myself that the flight was just a few miles shorter than New York to Los Angeles. Since this was a westbound flight, I figured the flight would be maybe 5hr30min in the air. U.S. carriers typically schedule New York to Los Angeles flights at around 6hr30min gate-to-gate, and that includes generous padding, plus plenty of time for dealing with two congested airports.

Ford asked me how long the flight was, so I said “maybe five and a half hours, or so.” I knew what time we were scheduled to depart and arrive, though with timezone differences hadn’t investigated the actual flight time.

When I pulled up the flight on Google Flights, it indicated that the flight time was 7hr45min. I assumed this was a glitch, because I’ve never before seen a sub-2,500 mile flight that’s blocked that long.

However, I pulled up the flight on Flightaware, and saw that the flight doesn’t just have that long of a block time, but actually has a flight time that long. A few days ago the flight took 7hr46min in the air, which is longer than the block time.

In looking at the map, it’s clear the flight takes a really circuitous routing: 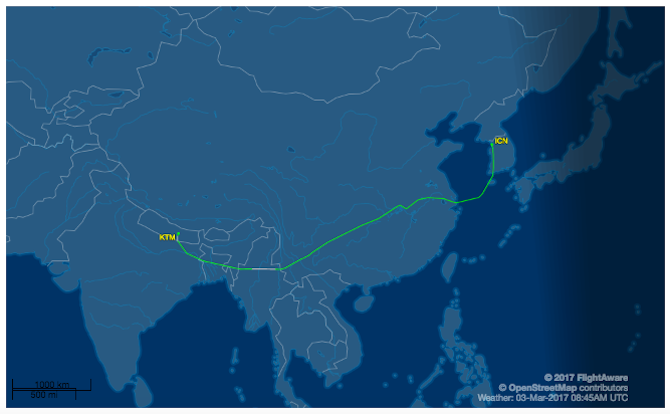 For example, a few days ago the flight covered a distance of 3,176 miles, while the direct distance is 2,467 miles.

I understand why airlines avoid certain airspaces. For examples, a few months ago I flew Ukraine Airlines from Baku to Kiev, and the flight time was 3hr30min, even though we were just covering a direct air distance of 1,150 miles. But Ukraine Airlines also has a lot of airspace they need to avoid. 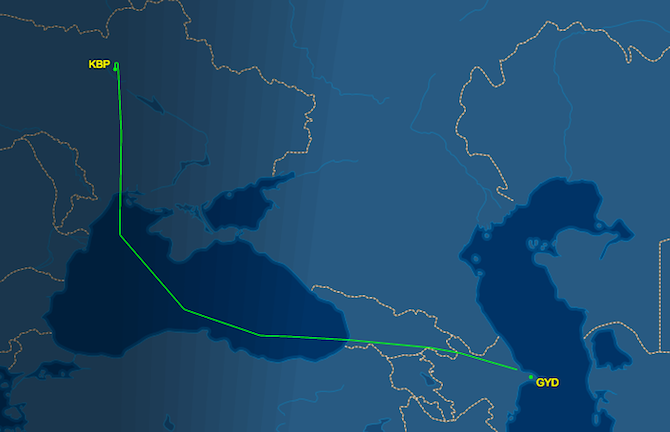 However, I didn’t think that would be the same flying from Incheon to Kathmandu, unless it’s terrain related?

So anyone have any insight as to why Korean Air’s ~2,500 mile Incheon to Kathmandu flight takes nearly eight hours?!

It's wind. Beijing Tokyo return, can take 4 to 7hrs at the slowest.

A few factors comes into play in this issue. 1. Terrain, potential diversion airport and aircraft capability. KTM is very close to Mt. Everest which lies right on the Chinese-Nepali border. Aircraft has no problem flying over it for sure, but keep in mind that there are only a few airport in the Tibetan Plateau area and the only few being able to handle wide-body jet is LXA (Lhasa, China) and XNN (Xining, China). Also, the terrain around these airports is very tricky. Air China has designated pilots and modified aircraft with specific navigation system for only these high-altitude airports in their CTU base, and I'm sure other Chinese carriers does the same management for these routes and avoid flying there aircraft over Tibetan plateau as much as possible. E.g. URC-CTU flight does not fly over Tibetan Plateau either. Korean Air does not even operate flights to any high-altitude airport so their pilot would be very inexperienced in this kind of altitude condition if a diversion is ever needed. Also, in case of emergency, aircrafts cannot decent to a lower enough altitude to escape the risk of hypoxia, as the average altitude in this area is higher than 3500 m. Last but not least, yes, Air China flies LXA-KTM with their high-altitude certified Airbus A319 with a modified engine, enabling it not to reduce as much performance as other airplanes in high-altitude airports. 2. Weather. Located not too far from the south slope of Himalayas, KTM does have some tricky wind conditions due to the monsoon and the sudden raise of terrain. Frequent precipitation could be expected at the south slope of Himalayas and makes the approach to KTM from the north way more difficult. 3. Head wind. West wind are especially strong above lower-mid-latitude area. An example would be HKG-IST, which looks way shorter than HKG-CDG, but takes only more than one hours or so less. 4. Airspace restrictions. China imposes several designated air corridor for foreign carriers in their airspace. Look at flightradar24 and u will see where the aircrafts mostly segregates along. Airspace over Tibetan Plateau are only open to domestic carriers and the military-controlled airspace takes even more share there.