An airline you’ve probably never heard of (and frankly that I hadn’t heard of prior to today) wants to start flying to the United States… cool!

Jordan Aviation has this week filed with the US Department of Transportation (DOT) for a foreign air carrier permit.

The airline is seeking expedited approval, as it plans to start operating scheduled service between Jordan and the United States by April 1, 2021, at the latest. However, if approval comes before then, the airline plans to offer charter-only service prior to that.

Jordan Aviation’s charter services would involve the carriage of persons and property (primarily PPE), though it sounds like the airline would offer regularly scheduled service after that.

Jordan Aviation hasn’t made it clear which US airport it wants to serve, or which airplane it would use for the service (though there are only three real options, as I’ll get into below).

What is Jordan Aviation?

Jordan Aviation has no relation to Royal Jordanian Airlines, which is a oneworld member and already flies to the US. Rather as I’m finding out now, Jordan Aviation is a privately owned Jordanian airline that has been around for over 30 years.

Jordan Aviation’s fleet consists of about a dozen planes, including A320s, A330s, 737s, 767s, and a 777. Here’s a breakdown of the registration codes and configurations of Jordan Aviation’s planes: 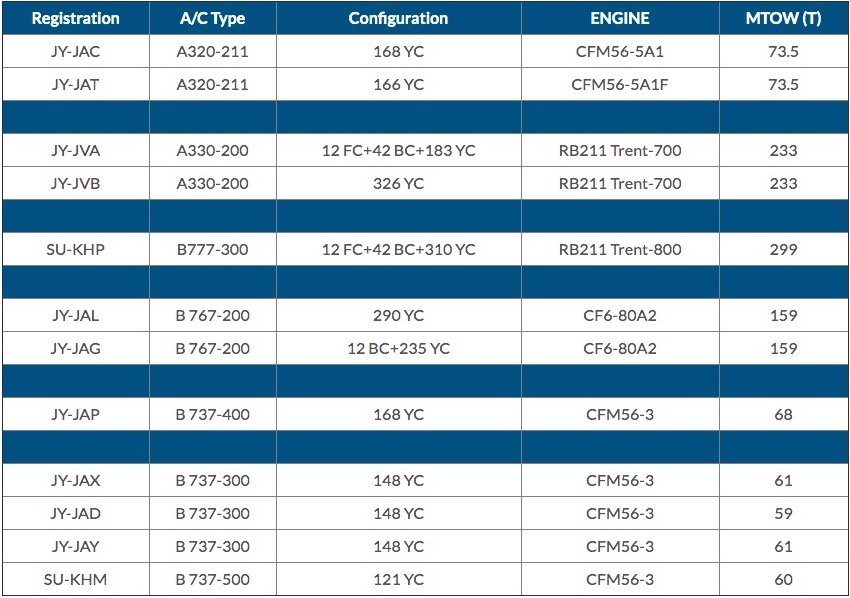 Presumably Jordan Aviation would use one of its A330s or the 777 for US service, based on the range required:

Jordan Aviation plans to launch flights to the US by April 2021. While details are limited about the service, the airline will presumably fly one of its A330s or its 777.

Now, in fairness, I’d be surprised if this becomes a permanent, regularly scheduled flight, given the carrier’s business model. I could be wrong. Regardless, as an avgeek I’d sure love to fly in a former Emirates first class seat, or heck, I’d settle for seeing one of these cool planes at a US airport.

Has anyone flown on a Jordan Aviation flight before?

When the Peace Corps was evacuated world wide in March 2020, Jordan Aviation was contracted to fly many of us back to the US. The plane my country was supposed to be on had a mechanical so we ended up on Air Europa. When we finally landed at IAD there were a couple of Jordan Aviation planes on the ground from countries that had gotten out before us.

I have seen this plane parked at the Jose Marti International Airport, I wondered why it was there. The only thing I could reasonably guess was that it was there to ferry Cuban Humanitarian Medical workers who were going to aid other countries during the Covid Epidemic? But then again I have seen aircrafts at HAV that I couldn't explain, including once a Qantas aircraft (later on I found out that it is a charter from Australia which happens twice a year, to Latin America and one fo the stops is Havana)