It’s interesting to see how Uber has evolved over the years. When Uber was first introduced, the whole selling point of the platform was that it was a cashless system, and tips were expressly discouraged. This was in stark contrast to the taxi industry.

However, over the years they’ve evolved, especially as dissatisfaction has grown among drivers. Uber has a new CEO, and the company has pledged all kinds of positive changes to help drivers make more money, including the introduction of in-app tipping, which we saw rolled out in the summer of 2017.

When tipping was first introduced, Uber made it clear that this was entirely discretionary. There was no expectation of tipping, and based on the comments most of you left, it’s clear that a majority of people didn’t intent to tip through the app.

It’s interesting to see just how far Uber has come in that regard. During a CNBC interview in Davos, Uber’s new CEO, Dara Khosrowshahi, was asked about how passengers can improve their Uber rating. He explained that he’s an aggressive tipper, and suggests this is a way to improve your rating:

“You should tip more,” Khosrowshahi said. “I am a very aggressive tipper right now. I pick the highest tip every time. Somehow my rating is getting better. I’m not sure if it’s aggressive tipping. Everybody, tip aggressively.”

A good rating has its benefits, since you’re more likely to get a driver with a high score, too.

“When you get a 4.8 or 4.9 rated driver, know that that driver has passed an array of background checks and has a history,” Khosrowshahi said. “That’s more information than you have if you hail a cab in New York City.”

He basically suggests that the more you tip the better your rating, and the better your rating the better the chance that you’re linked to a good driver. The irony in this statement is that Uber drivers don’t see if passengers have tipped until after they rate you, so clearly this is false. Also, when the CEO of a company says “I have a good Uber rating and I tip a lot,” that seems like a false correlation to me.

I can appreciate that Uber’s CEO wants to maximize the money that drivers on the platform are making, though I find that dispensing incorrect information to encourage people to tip is pretty low (and I say that as someone who is usually accused of being too pro-tipping).

What do you make of the Uber CEO’s statement?

I am happy to tip for great service. However, the last 5 times I have attempted to tip Uber drivers, it hasn't worked. Sometimes a tip goes through, and sometimes it doesn't. So, it seems odd that riders are penalized for not tipping given the circumstances.

tipping is ridiculous, i dont do it except for maybe $1-2 dollars at the restaurant. it's your job, you signed up for it, you get paid what you get paid. if people choose to tip you, great, if not, too bad.

@Lucky -- Is that the correct use of dispelling? Perhaps you mean dispensing. 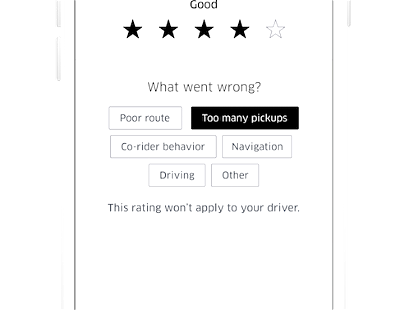