Early last year sanctions began to be lifted between the US and Cuba, following the embargo that was in place for decades. This was huge news for those looking to travel to Cuba, since it created more circumstances under which US tourists could visit (and those travel restrictions have been eased even further since then).

Only 20 of those daily frequencies could be commercial flights to Havana, though, while the other frequencies would have to be to other cities in Cuba (where there’s presumably a lot less demand). US airlines had a 15 day window where they could request flights to Cuba, so at the end of that we learned of all the flights US carriers wanted to operate to Cuba, which far exceeded the number of available frequencies.

Meanwhile there was a lot of competition for flights to Havana, meaning the DOT had to go through a selection process for those flights.

Well, that process is now complete, and the Department of Transportation has tentatively awarded eight US airlines the right to operate certain routes to Havana. Per the DOT’s press release, these routes include the following: 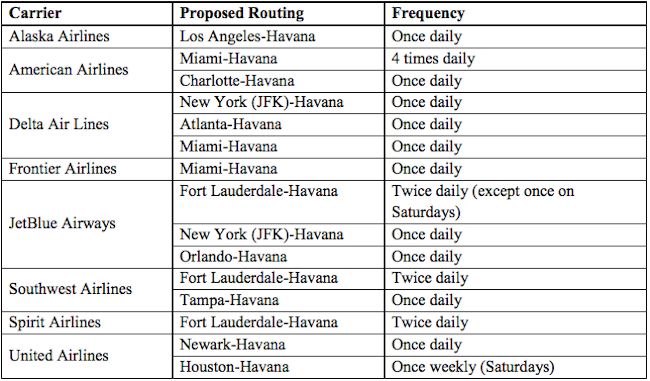 It’s worth noting that these are just tentative decisions, and can still be modified:

DOT has only issued a tentative decision, and airlines will not be authorized to sell tickets or operate scheduled flights until a final decision is reached sometime later this summer. The airlines have proposed varying startup dates for their services, but most are planned for fall and winter 2016/2017. DOT’s decision contains requirements that, if made final, will require that the carriers begin their services within 90 days of the issue date of a final order.

What do you make of the city pairs that the DOT granted for Cuba flights?

Lucky what's the chances I can purchase a ticket and get a flight to Havana from Fla. or Houston by late October or mid November. This Paul

Don't understand a few of these - JetBlue should have gotten TPA based on their charter service, and I'm not sure why they get one fewer FLL on Saturday (unless they requested it and I missed that.). And I don't understand the Frontier service from MIA, they're a small player in MIA. Also a little surprised that 3 different NYC-MIA routes got the nod. It was nice to see the Feds not bend over backward to satisfy WN, though...I expected Southwest to get more. Not sure the AS service from LAX will work, but points to them for trying, I guess.

The only flights to Cuba we have is thru frontier