This could shape up to be a tough week weather-wise.

If you haven’t heard, there are several large storms brewing in the Atlantic, with Florence being the most imminent and aggressive. 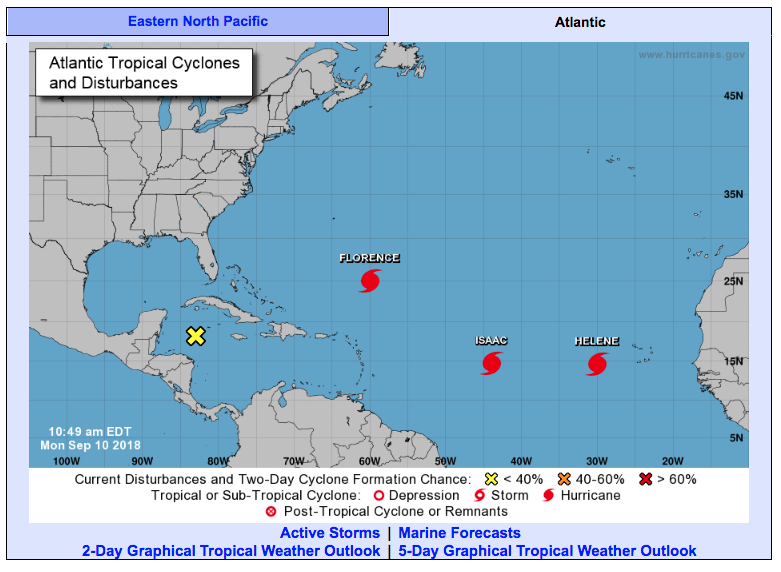 Florence is now a Category 4 hurricane, and is expected to reach the Carolina coast Wednesday night/Thursday morning. 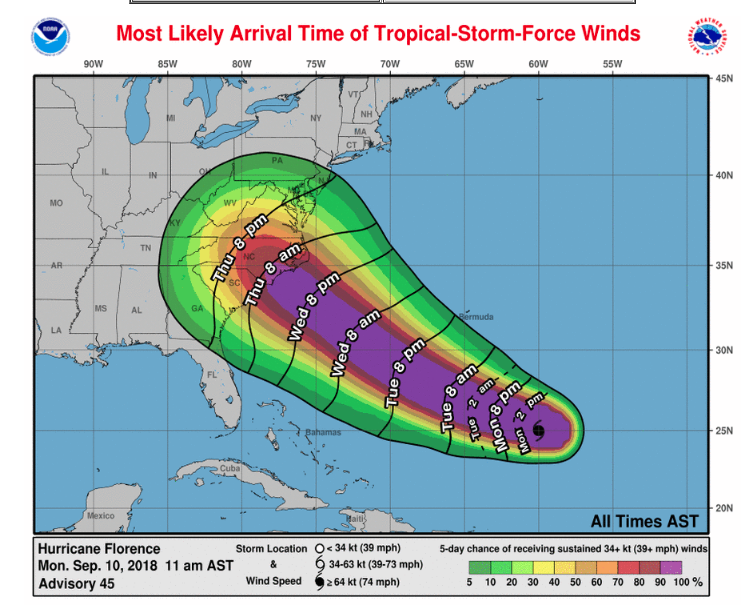 Meanwhile, Guam and the Marianas are dealing with Typhoon Mangkhut, which is expected to continue increasing in strength as it moves through the Pacific:

And Hurricane Olivia is brewing off the coast of Hawaii: 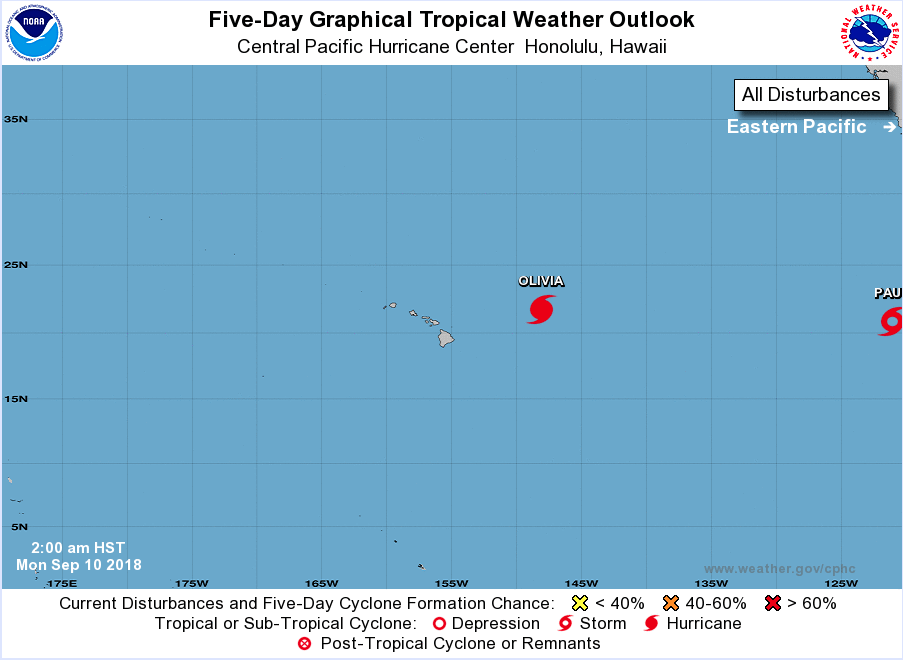 Significant amounts of rain (much less a hurricane) can often cause systemwide disruptions — though given the nature of South Pacific and Hawaii operations the impacts  in those regions will likely be fairly localized.

Florence is the greater concern for general airline operations, given the density of airports, crews, and aircrafts on the U.S. Eastern seaboard.

So, if you’re scheduled to travel in the coming days you’ll want to take precautions, and monitor the situation closely.

Typically the best case scenarios once these storms make landfall involve widespread power outages and flash flooding. Even if you’re traveling to an area which isn’t directly in the storm path, you should expect operational delays and challenges at nearby airports, or those that normally have substantial numbers of flights to impacted airports.

At present, we aren’t seeing mass cancelations of flights yet. That could always change though, and some airlines have already posted weather waivers.

In general, the airlines are going to accommodate you if you’re able or willing to move your plans around — after all, they don’t benefit from having cranky passengers stuck in the terminal either. There are nuances to each policy though, so you can see the individual policies on the airline sites.

Not every airline has posted a waiver, but I’ve included the links to where a waiver will potentially be posted regardless:

Keep in mind that as the severity of the storm increases, the parameters of the waiver can change. At the time of this writing, for example, most airlines are not waving cancelation fees, but are allowing you to rebook for later in the weekend, or next week.

Regardless of the reason for flight cancelations, phone queues can get ugly fast. Given that many people need to rebook at the same time, you might be able to get new plans confirmed more quickly by using an alternate method.

Don’t leave this until the day of travel, but if the situation changes and you’re already at the airport, start with the lounge agents. They tend to have fewer passengers to deal with than the gate agents, and thus may have more time (and more patience), when it comes to rebooking your flight. The exception is Alaska, as due to contractual reasons their lounge agents literally can’t help with flight reservations.

As I say every time we have a major storm, you want to be as proactive as possible in these situations. Pay attention to your flight, along with the status of your inbound aircraft, and be prepared to react quickly and creatively.

If you have plans to travel to the region, I’d suggest rescheduling now, as it looks like the ground situation is going to be messy at best. And keep in mind that even if you aren’t traveling in, to, or through the storm corridor, your aircraft might be, so you could still be impacted by this storm.

This isn’t a situation you can control, but you can lessen the impact on your life. The best thing to do is pay attention, and be as proactive as you can.

Anyone living in or flying to/through these areas later this week? What’s your plan?

RE: "...As of last night Alaska will waive the change fee but will NOT waive the difference in flight cost when we called to try and push her to a Sat or Sun Flight or possibly even out on Wed. " That's my big gripe with most airlines. When an catastrophic event like a major storm is looming, and the airline issues a notice that change fees will be waived, they often don't waive the difference in costs between your existing reservation and your new one. You need to wait until doom is imminent before that happens. So forget about being proactive. Just join the queue of folks desperately trying to get through to an agent at the last minute and making life miserable for the airlines and everyone else. I hope airline reps are reading this..

Even though United hasn't made an official statement, in preparation for the storm United did waive my fees to rebook to a future flight today. I live in the RDU area with a flight to IAD today returning to RDU Thursday. No status with United, they just put me on hold and decided to waive it as of 11:30 am today, good luck.

@Jacob. Good to know - thanks. I never heard about this number before.