Taiwan has two great airlines — China Airlines and EVA Air. They didn’t used to be nearly as good as they are now (in particular China Airlines), though they’ve really put an effort into their product, and now both offer among the best business class products out there.

I’ve also reviewed both airlines in the past several months on the same route on the same plane: 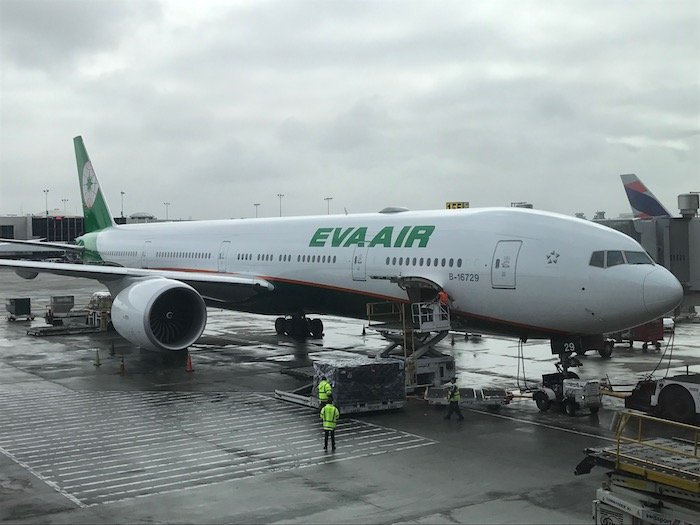 Several readers have asked if I could do a side-by-side comparison of the two airlines, which seemed like a cool idea. Before I do so, let me add the disclaimer that this is based on my firsthand experience only, and of course your experience may differ from flight to flight.

Here are comparisons of a few major aspects of their products, in no particular order:

Also, personally I far prefer the finishes that China Airlines uses for their cabins. China Airlines’ 777 business class cabin is stunning; I love everything about the cabin. 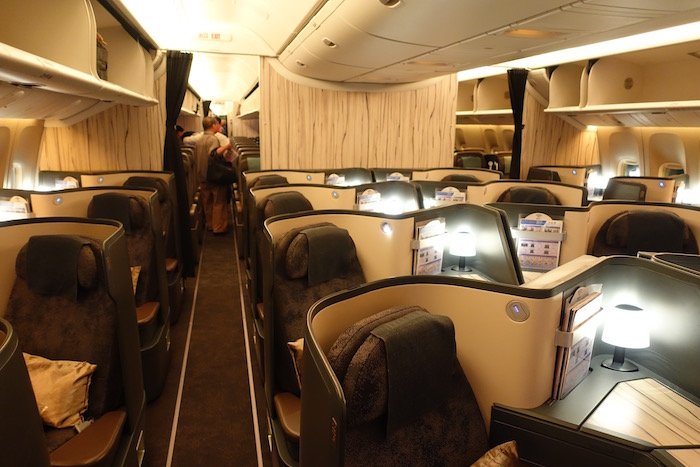 While EVA Air’s 777 cabin is extremely comfortable, I can’t say that the design is my favorite. 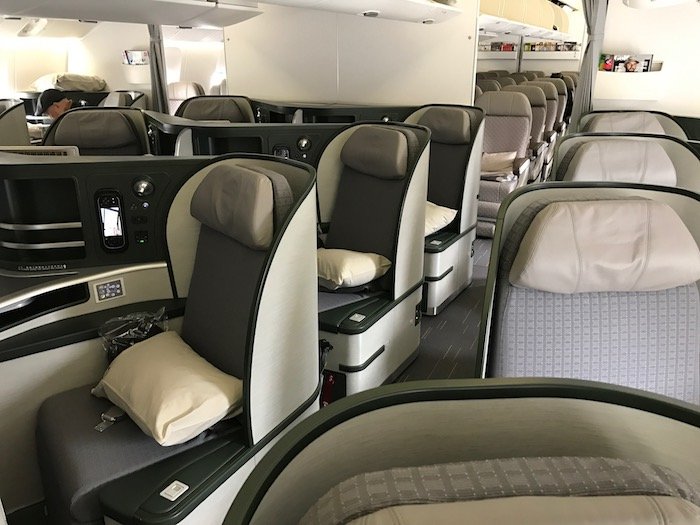 China Airlines also has a cute walk-up bar on the 777, with snacks, drinks, etc. 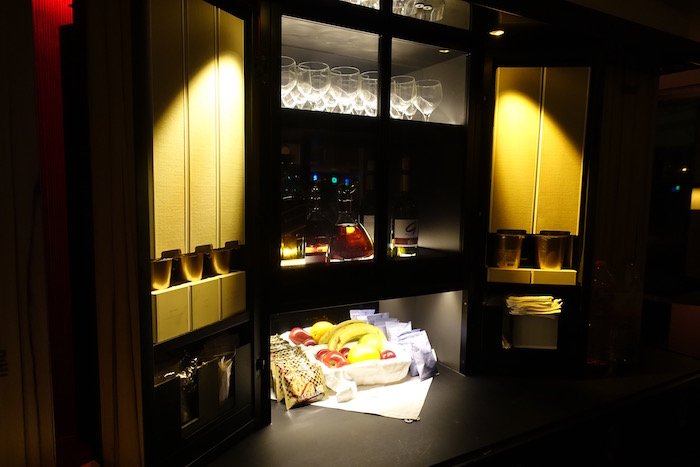 While EVA Air also has a small selection of snacks, the design certainly isn’t as nice as China Airlines’. 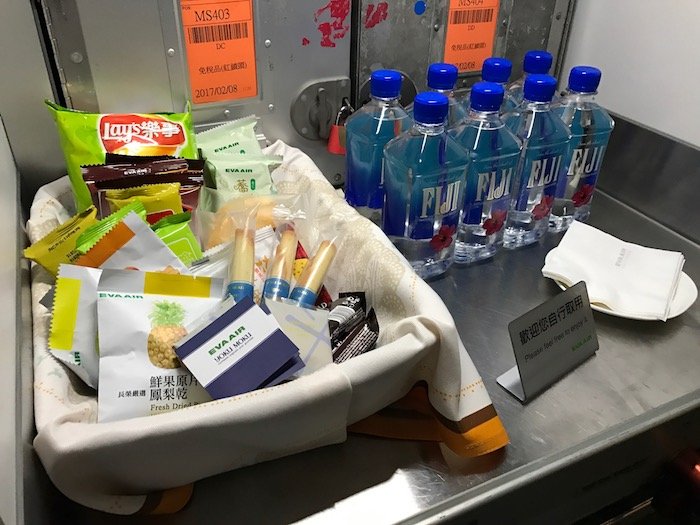 I’ve consistently found EVA Air flight attendants to be friendly, charming, and personable. I also haven’t found there to be much of a language barrier on EVA.

Meanwhile I’ve found China Airlines flight attendants to be well intentioned, though they’re generally not quite as polished as on EVA Air, and I’ve also found there to be more of a communication barrier. On the plus side, they have futuristic uniforms.

Both airlines have among the best Wi-Fi offered by any international carrier. On EVA Air you can buy Wi-Fi without data caps for 24 hours for $21.95: 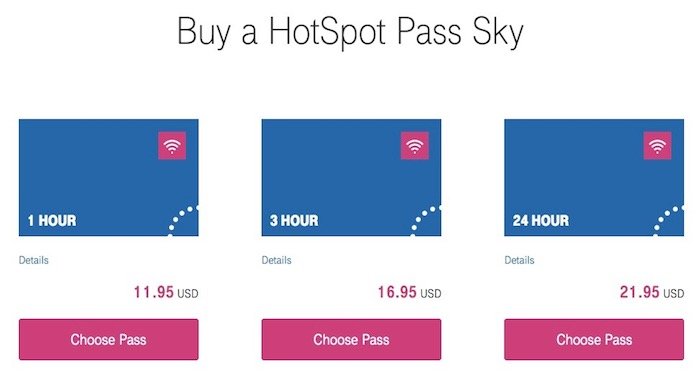 The pricing is identical on China Airlines:

So they both have fantastic Wi-Fi offerings.

At the moment EVA Air is pouring Veuve Clicquot La Grande Dame 2006 on many routes. 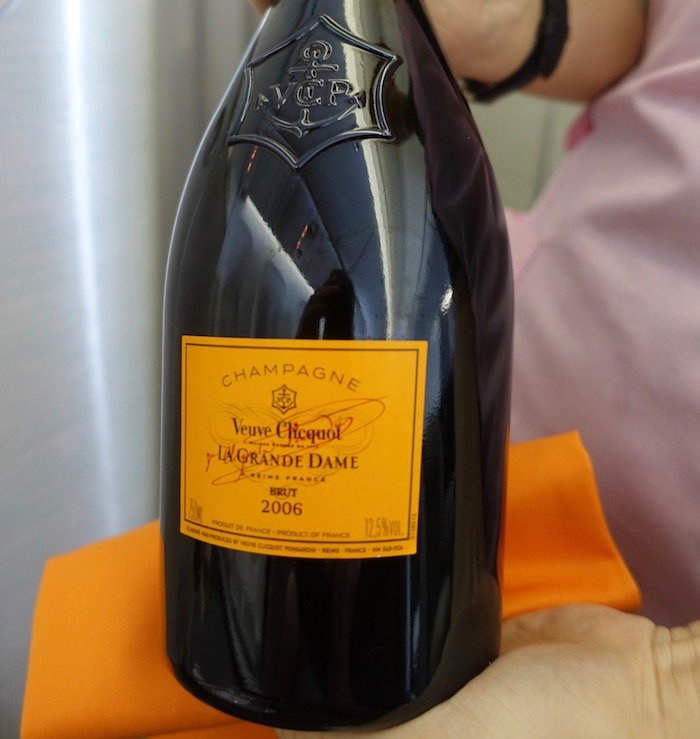 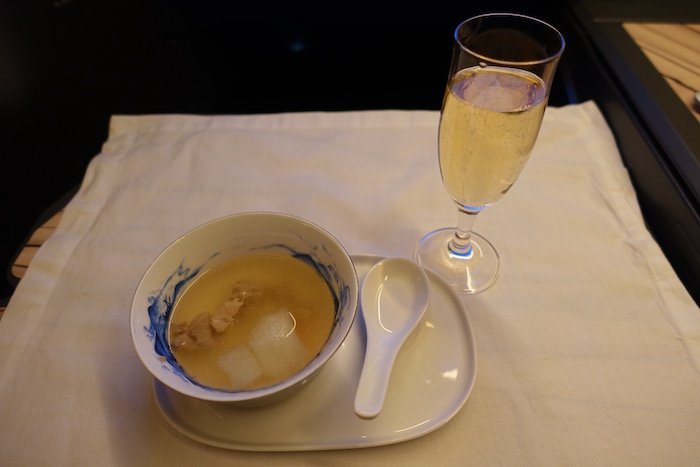 While both of those are excellent champagne options, EVA Air’s great drink selection goes beyond alcohol. They have Fiji water, iced coffee, etc. 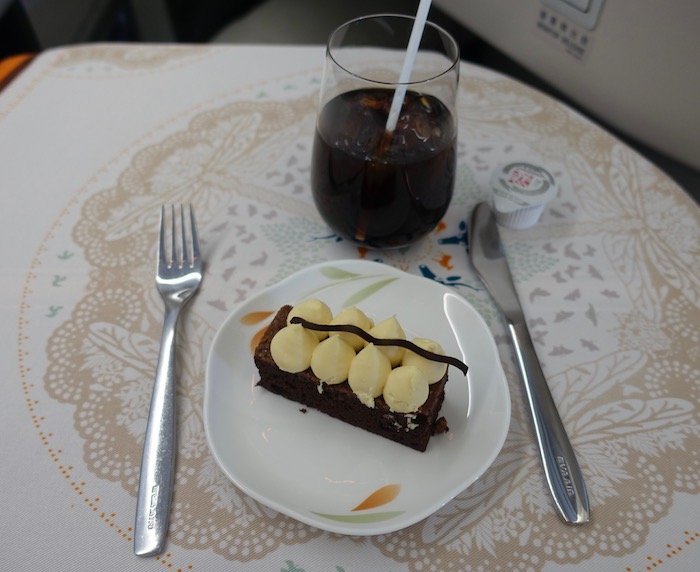 Both airlines have above average food offerings. On my recent EVA Air flight I was offered a foie gras appetizer, soup, salad, a main course consisting of incredible miso seabeass, a fruit and cheese plate, and then dessert. 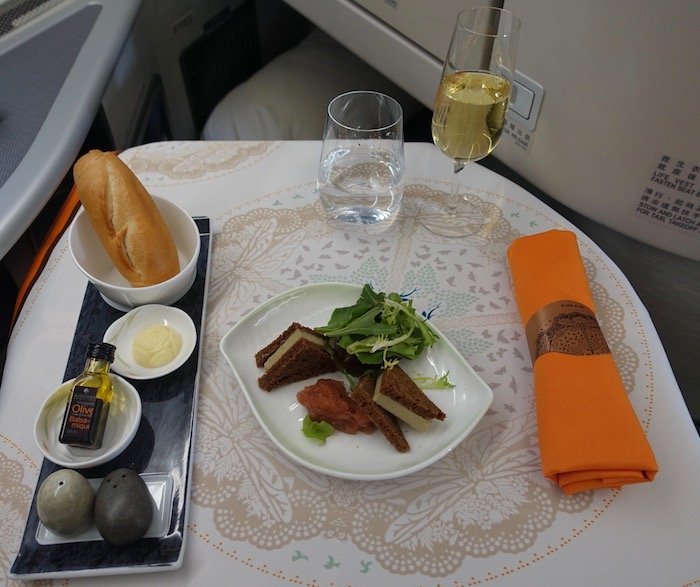 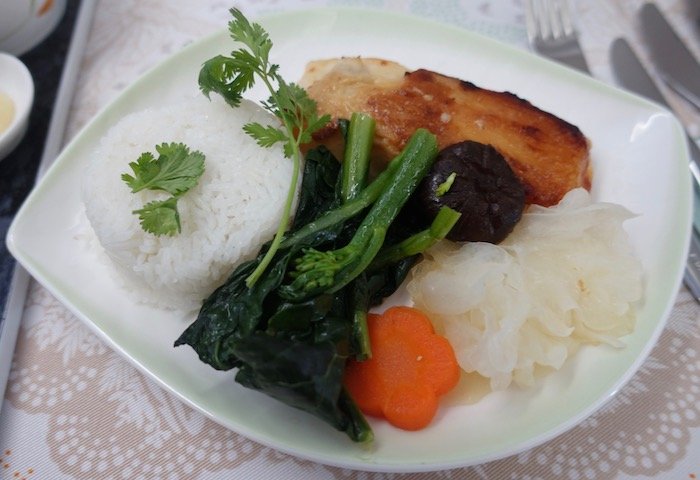 On China Airlines I was offered caviar blinis and soup to start, then filet mignon as the main course, and fruit and ice cream for dessert. 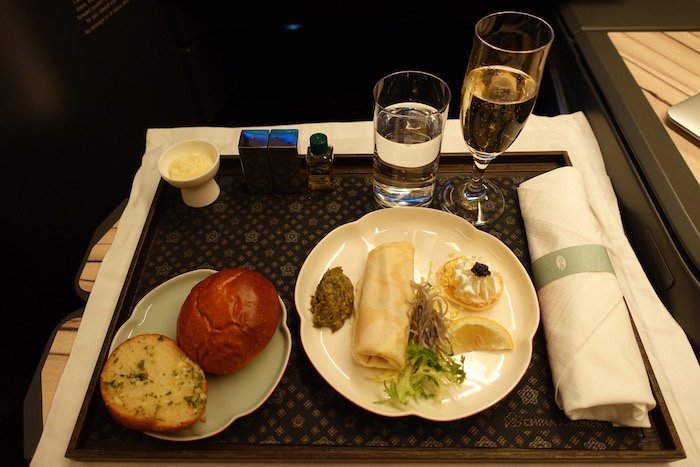 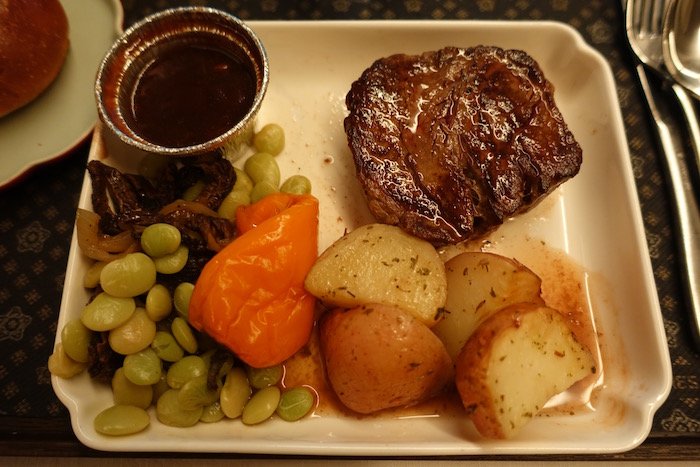 In fairness, my EVA Air flight departed at 11AM, while my China Airlines flight departed after midnight, so that may have factored into what was being offered. However, I found the food quality on EVA Air to be a bit better.

EVA Air has Rimowa amenity kits in business class, which are unbeatable. 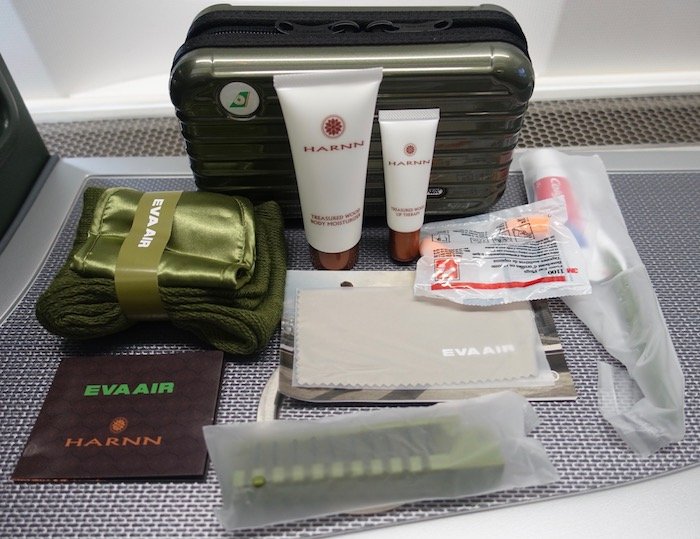 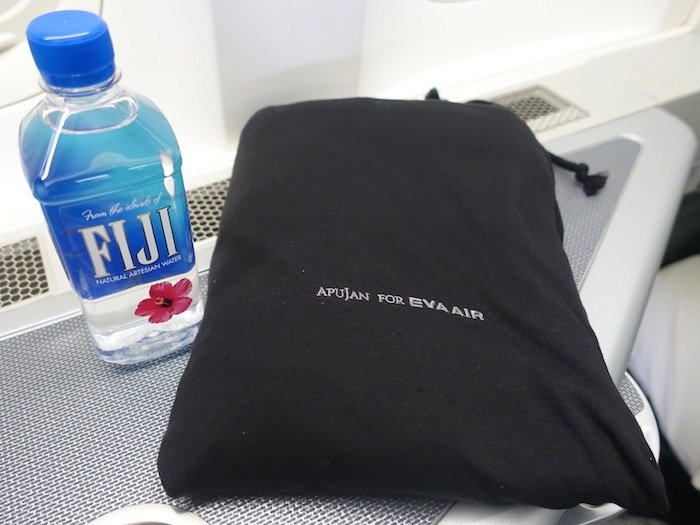 The pillow and blanket are also among the best offered by any airline in business class. 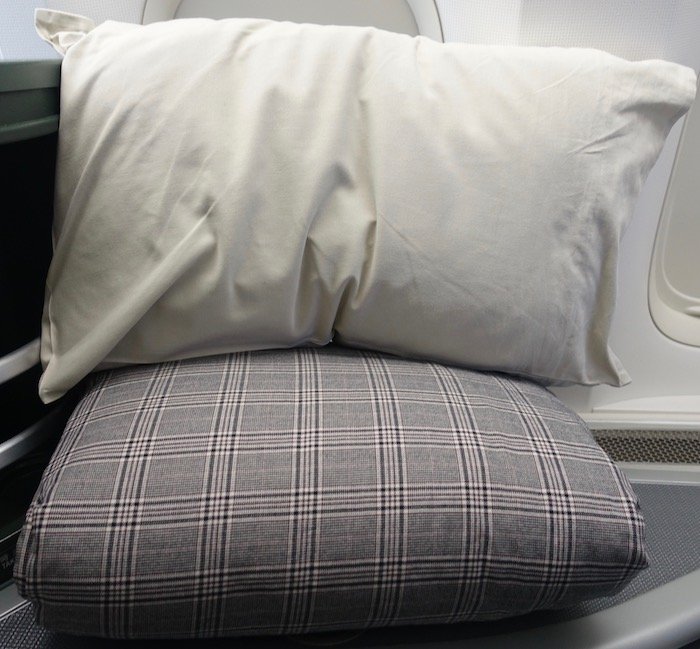 Meanwhile China Airlines offers a nice ACCA KAPPA amenity kit, though that’s not quite to the same level as the Rimowa one offered by EVA Air. 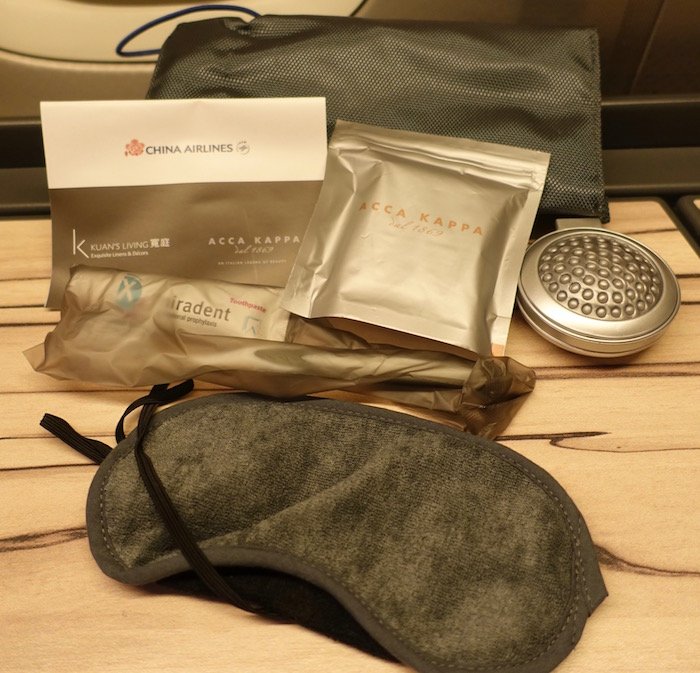 They also have a decent pillow and blanket, though it’s not as comfortable as what’s offered by EVA Air. 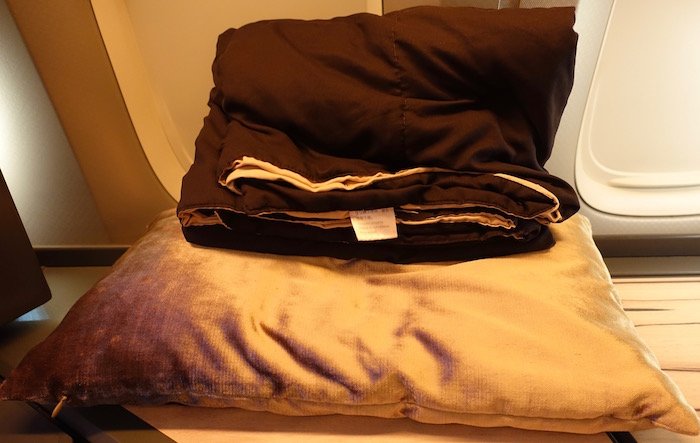 Using my general categories above, China Airlines wins in one area, EVA Air wins in four areas, and it’s a tie in one area. However, I really can’t emphasize enough how both of these are top notch business class products, and I’d recommend them both in a heartbeat.

For example, China Airlines “lost” the drink category despite serving the second best business class champagne offered by any airline, so that shows you just how competitive these airlines are.

China Airlines has gorgeous cabins, while EVA Air has a fantastic soft product. I can’t recommend either airline enough.

If you’ve flown both EVA Air and China Airlines, which did you prefer?

China Airlines is competitive with its A350 and 777. Compared to EVA, it wins in cabin decor and its Premium Economy cabin which have much better seats than EVA's. But for most of the readers here who mainly fly in Business Class, EVA wins in almost every category except its cabin decor. EVA provides pajamas, Rimowa amenity kits, Hello Kitty planes, Din Tai Fung snacks, Krug and Veuve La Grande Dame (both which I find better than Pol Roger), and it's Star Alliance membership is also arguably better. Their Economy product appears to be the same level.

Lol as if Ben would care about an airline's labour relations in deciding which was the "best".

I am now a little bit suspected your taste and review. As a Taiwanese, we all think China Airlines new uniforms are super ugly. China Airline was good 20 years ago when EVA was just established. At that age, China airlines have the most beautiful crews. But they are getting worse and worse with many air incidents and flight crashed. Until last year their new business class and A350 made them looks new and comparable. EVA is always very nice with great services. They were even awarded 5 stars airlines last year. Obviously, EVA is much better than China airline. Though EVA still have some problems with their taste levels. Ugly seat colors I agree. Both airlines are very local and lack of international view. Finally you are right, the winner should be EVA, no doubt. 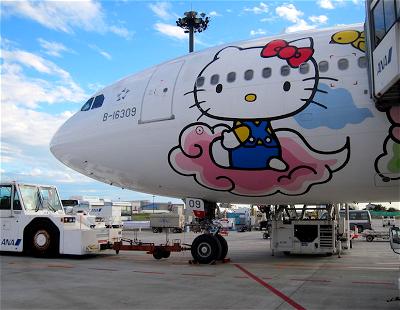 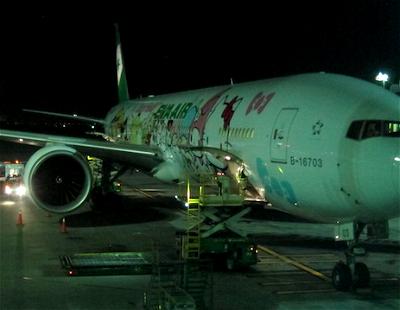