In January, Abu Dhabi Airport added a US customs pre-clearance facility, whereby you clear customs and immigration prior to boarding your US-bound flights. 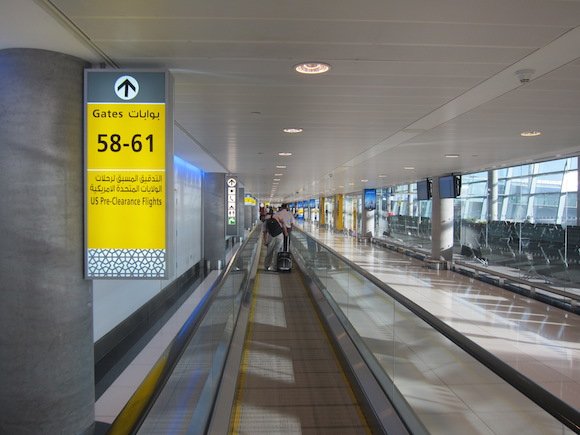 In early June — prior to the inaugural Etihad Airways flight from Abu Dhabi to Los Angeles — I used the facility. The facility was simply a bloody mess:

And just to look at the statistics, per FlightStats.com, here’s the on-time performance for Etihad’s New York flight, EY101, which uses the pre-clearance facility: 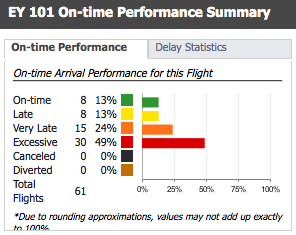 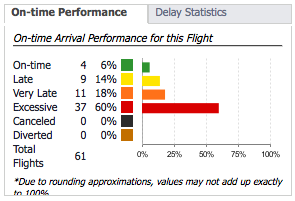 But via Arabian Business, it seems that Etihad’s CEO disagrees (bolding mine):

Etihad Airways president and CEO James Hogan added: “This is a game changer as far as Etihad is concerned. The facility has made a huge difference and really couldn’t have gone better. It’s great not just if you are flying direct to the US from Abu Dhabi but also connecting from elsewhere in the region.”

A game changer and it really couldn’t have gone better? Are you f&^$ing kidding me? Has he used the facility?

It’s one thing to say “well, we’re still trying to work out the kinks, but overall we’re pleased,” but to say that it’s a game changer and couldn’t have gone any better is a babbling brook of bull$hit if I’ve ever heard one. I’ve heard tons of people say they’d avoid Abu Dhabi because of this facility, but haven’t heard anyone saying “oh, this sounds so awesome, I’m totally going to connect in Abu Dhabi now.”

Actually, quick straw poll — has anyone used the facility and been so happy with it that they’d go out of their way to connect in Abu Dhabi again just to use it?

Well, when you implement a “perfectly executed game changer” in one place, the logical conclusion is to expand it… right? Via Arabian Business, it seems like that’s what they’re looking to do in Dubai (bolding mine):

The United States is set to extend its immigration pre-clearance facility to include Dubai as well as Abu Dhabi within the next year, the US ambassador to the UAE has told Arabian Business.

Speaking at an event in Los Angeles to celebrate the launch of direct flights from Abu Dhabi on Etihad Airways, Michael Corbin said: “‎We are looking at Dubai as an option for pre-clearance. It has only been operational for a few months in Abu Dhabi but has been a huge success and we want to expand it in the UAE. President Obama has made it his priority to encourage more visitors to the US and this is a big part of that.” 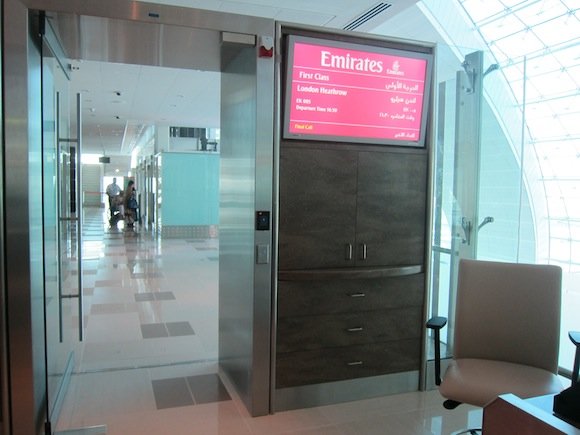 Board directly from the lounge at Dubai Airport

I guess the only president of a Middle Eastern airline with a head on his shoulders anymore is Tim Clark of Emirates. In this video he correctly calls such a facility a logistical nightmare, and (correctly) identifies that a pre-clearance facility isn’t the solution:

To paraphrase the key part of what he says:

“I’m not sure the benefits are that great given the scale of what we are doing into the US at the moment. The trick, really, is for the US government to restore its human resources to its entry points so it can meet the requirements of the consumers that want to go into the US. This is all a result of a shutdown of the resources that have fallen into border protection in the US.”

Ding, ding, ding, we have a winner! Why don’t we work on improving the flow of US immigration facilities in the US, by properly staffing them during peak hours, adding more automated machines (as we’re now seeing at some US entry points), etc.?

Look, I’m not trying to be a big ol’ drama queen here, but there are some things that really grind my gears. The fact that something can be so poorly executed, yet both the CEO of the airline and the government officials basically call it a perfect success, just leaves me shaking my head.

And it’s one thing if such stupidity is isolated, but the fact that they think it’s such a success that they should expand it further is what really makes me mad. I hope that Emirates pushes back…

My wife and I used the US preclearance facility at Abu Dabhi Airport in April 2015. There is a small first class lounge after US preclearance that offers sandwiches and beverages. Upon arrivel at JFK, we were greeted by a Etihaad representative with a placard at the gate of the aircraft, and guided to the baggage carousel. We had to point our bags, which were picked up by a valet, who took us to a waiting limo, that courteously dropped us to our destination. I beleive we had a very satisfying experience ! I beleive First Class is not a ticket, it is a way of life. If there is someone in a wheelchair, and one has a first class ticket, one must let them pass and assist them.

I understood what Sean M said. Also, no need to attack other people who criticize Lucky, he can defend himself quite well. Not every criticism is based on "jealousy" (which is as dumb a counterargument as "haters keep on hating"...the last resource of someone who can't come up with an effective counterargument). "Majority of these expenses in UAE cities are paid by the local governments. Why would US do that in their own airports to hire extra staff." Yup. Why have the US government pay for it themselves when the UAE royal families will subsidize the majority of the costs?