Delta is now threatening to ban SkyMiles members who threaten and/or insult Delta employees, and much more.

The Delta SkyMiles program rules have just been updated in a noteworthy way. SkyMiles members can now be banned from the frequent flyer program for documented abusive behavior towards Delta employees.

Specifically, the SkyMiles program is threatening to ban members if they insult or threaten Delta employees, if they use excessive obscene or profane language directed at Delta employees, and/or if they intentionally destruct Delta property.

Delta may terminate your SkyMiles membership, including any Medallion Status, on the basis of documented abusive behavior.

Abusive behavior means behavior that is directed at a Delta Employee or ambassador, during travel or interactions with Delta’s Reservations or Customer Care personnel, where the passenger’s conduct is disorderly, abusive or violent, including without limitation:

This update isn’t too surprising

It goes without saying that passenger behavior during the pandemic has gotten significantly worse, between mask compliance issues, political differences, and people just generally being on edge.

It has gotten so bad that at the beginning of 2021, the Federal Aviation Administration introduced a zero-tolerance policy, whereby passengers can face jail time or up to a $35,000 fine for misbehaving on a flight.

Beyond new federal regulations, we’ve seen airlines take matters into their own hands, and arguably Delta has been at the forefront of that. Also earlier this year, Delta threatened rude passengers with lifetime bans. As Delta CEO Ed Bastian described this in a memo to employees:

“Please know that respect and civility to others on our planes, at our airports, in our workplaces, and in our society — even when we have differences of opinion — have always been a requirement for our people and our customers. Those who refuse to display basic civility to our people or their fellow travelers are not welcome on Delta. Their actions will not be tolerated, and they will not have the privilege of flying our airline ever again.”

Ultimately this seems like a reasonable measure for the airline to introduce, and it’s a good way for Delta to stand up for its employees, given how terrible some people are. Whether or not any members will actually be banned for this reason remains to be seen.

I’d consider this to be more reasonable than the recent British Airways Executive Club update, which essentially gives the airline the right to ban passengers from the program for criticizing the airline.

Earlier this year Delta started to threaten to ban passengers from the airline if they misbehaved towards employees, and now the airline is threatening to ban members from the SkyMiles program for similar behavior.

This includes those who threaten employees, use profanity towards them, or insult them, as well as anyone who intentionally destruct Delta property.

What do you make of Delta’s SkyMiles updates?

I am super frustrated that I am not able to reach DELTA Customer Service by 'phone: a five-hour hold time is predicted or via the Message Feature on Delta.com or in the Delta App. I cannot fix a reservation; I need a person. And, I promise to be kind when I ask for help.

Ive flown on many airlines, idiots and rude people are every where and generally should just stay home. Race, color or how you identify yourself was NOT mentioned in Delta's rules....if YOU added or implied any references about race or color? Your showing your own prejudice.. it's quite simple,,, Delta don't want rude, selfish or unruly people on the planes. THANK YOU DELTA, I hope other airlines also implement rules to keep customers and employees safe and enjoy the trip they want to ENJOY..

I really pity Delta, but I do respect them for undertaking this task. Delta essentially is America Tier 2, 3 city airline. It was explained to me by a Singapore based joint Air France KLM/ Delta/ China Eastern employee, that for the ethnic minorities living in the second, third tier cities still believe that racism and stuff is still as it was, as if Martin Luther King Jr was just assasinated. It also doesn't help that local religious communities have been pushing puritanical beliefs, and they're coming into big cities and basically seeing blasphemy. Please don't view them as racist or cast judgements on them. This is part of their learning process as they embark their journey from noveau riche to sophistication. We all were previously like that too. Yes, even in America, no one is like the other. 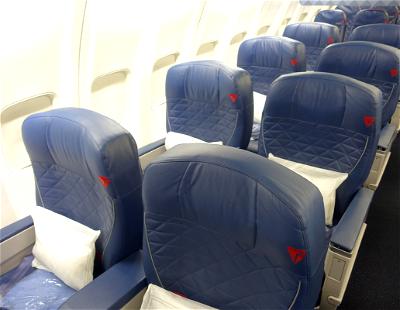 33
Which Delta Million Miler Gift Should You Choose?