Airline pricing is incredibly complex, as the airlines have put a lot of effort into ensuring that they’re maximizing the revenue they earn from each seat.

I just flew the Qatar Airways A380 inaugural flight in first class from Doha to London, and I actually booked it using an ex-Cairo fare.

Meanwhile just that same Doha to London flight costs ~$3,800, which is more than twice as much:

Lastly, booking London to Doha to Cairo costs ~$6,100, which is more than three times as much as the same ticket in reverse:

As you can see, where you originate really does make a difference. But perhaps even more lucrative than Cairo, Egypt is Colombo, Sri Lanka, which has long been the airport with the most reasonably priced premium cabin fares.

Unfortunately as of last March that fare was finally pulled — it had been around for a long time and I had written about it for years, though I guess it just got too popular at some point.

I’ve received a lot of questions about whether there’s a comparable first class fare from Colombo still available.

The answer is yes, sort of. Assuming you’re willing to fly roundtrip.

This fare is published by British Airways, and is $3,500++ roundtrip (so that doesn’t include taxes, fees, and fuel surcharges).

For example, you can fly from Colombo to Abu Dhabi (either on Etihad or SriLankan), then Abu Dhabi to London on the Etihad A380, and then from London to Los Angeles on the British Airways A380. The routing is the same on the way back. 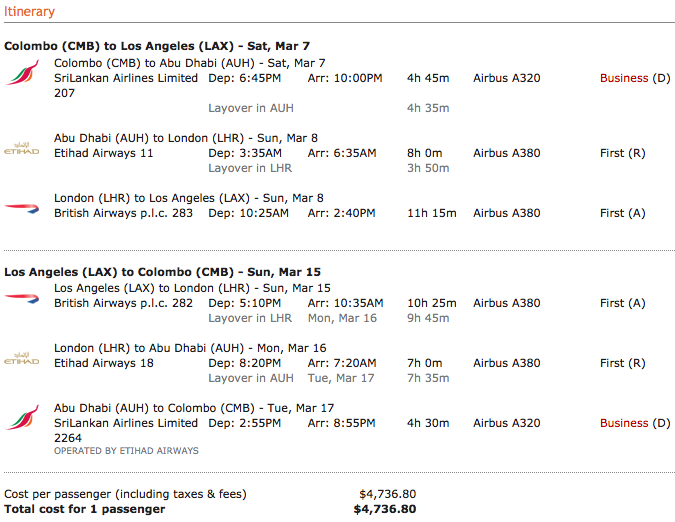 The fare is ~$4,700 roundtrip, so ~$2,350 each way. That’s the same as the fare that used to be available, except in this case a roundtrip is required. A similar fare is available to many other markets in the US, many of which are a bit cheaper (though I prefer the British Airways flight to LAX since it’s operated by an A380).

~$4,700 is still a lot of money, though let’s look at the same routing in the other direction, originating in Los Angeles and terminating in Colombo. That fare is ~$23,000, which is nearly five times as much. 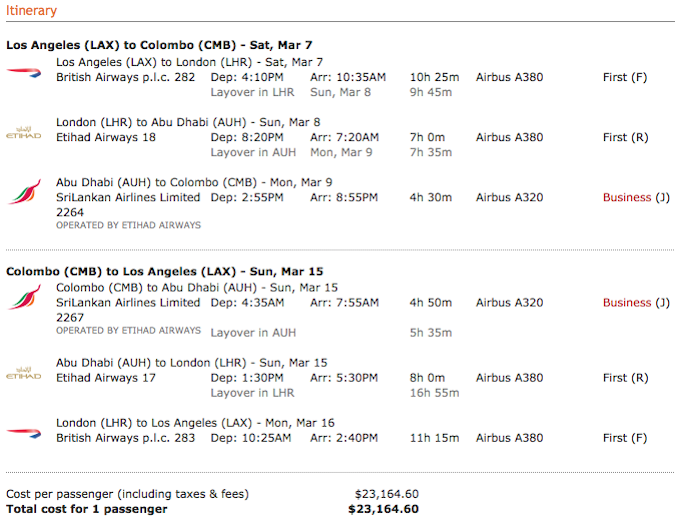 I do what I can to redeem miles for my international premium cabin flights. Fortunately a vast majority of the world’s best products are attainable on miles, from ANA to Asiana to Cathay Pacific to Emirates to Etihad to Lufthansa.

However, when a product isn’t realistically available on miles (as is presently the case with the Qatar and Etihad A380s), these fares originating in “cheap markets” can be a great way to try new products while picking up some miles along the way. 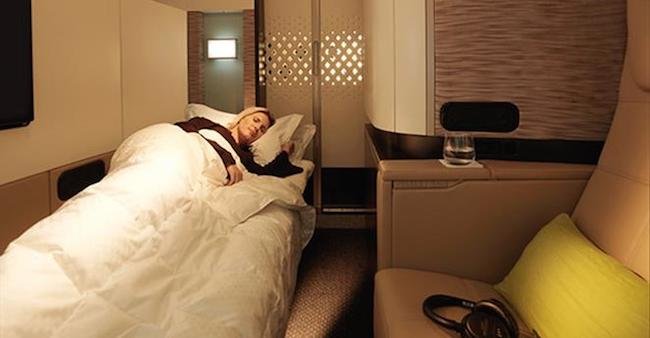 Have you ever booked a cheap paid premium fare out of one of these markets?

hello. i live in Colombo, Sri Lanka. been here all my life.. i want to be like you Lucky to be able to travel all the time, any time, anywhere, with my family if possible, in Premium Class cabins. So considering that I am in a place on the other side of the world from the USA, can you tell me how to set about getting the points and miles, to be able to generate sufficient mileage to enable not only myself but my wife and family also ( 3 small boys) to be able to travel often and in comfort..? Appreciate any advice and i will be following your posts.

Hi Ben, Can you please tell me if the F cabin return fair from Srilanka to U.S.A. @ 4700$ still available. Also as I am new in Miles game I do not have much miles as of now, can your award booking team also do above booking if available for us? Thanks in advance. Lov Agrawal

Do you have to call to book this or can you get this type of routing on a website? Also is it possible to stay at each destination for a couple of days rather than just connecting?