I love to see credit card companies get creative, and at the moment Barclaycard is piloting a program that I consider to be incredibly innovative. Unfortunately in my case it’s not actually lucrative, but I appreciate the idea behind it.

Barclaycard issues the $95 annual fee AAdvantage Aviator Red World Elite Mastercard, which even has an increased 60,000 mile sign-up bonus after the first purchase at the moment. That’s a heck of a sign-up bonus.

In terms of their American portfolio, they also issue the $195 annual fee AAdvantage Aviator Silver Card, which is what I have. You can’t apply for the card directly, but rather can only upgrade from the Aviator Red Card after you’ve had it for at least 12 months. The advantage of the Silver Card is that you can earn more elite qualifying dollars as well as elite qualifying miles for spend.

View from the Wing reports on a new Barclaycard pilot program called “Flight Cents,” that’s showing up when people log into their Aviator Card account. However, there seem to be different versions of the offer. When I log into my account there’s a pop-up about this offer. 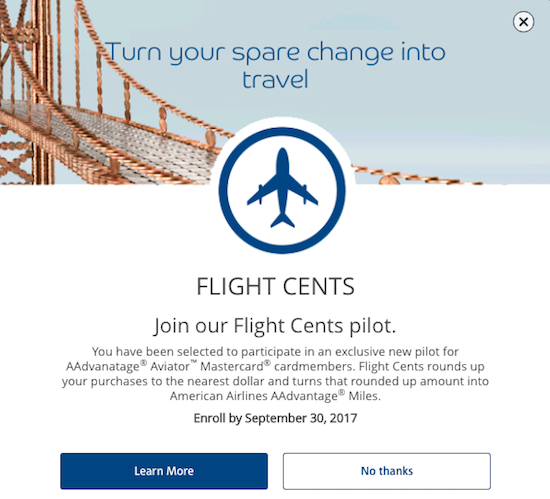 Flight Cents rounds up purchases to the nearest dollar, and turns the rounded cents into AAdvantage miles.

Here’s how Barclaycard describes this:

In other words, for me this is an opportunity to buy American miles at two cents each. For the time being this is a pilot program, and registration is required by September 30, 2017, while the program runs between October 1, 2017, and March 31, 2018. You’re also limited to having a “monthly round up threshold” of $500, meaning in my case I’d be limited to earning 25,000 miles per month.

At two cents per mile, I’m not a buyer of American miles. However, many people report a different offer — some accounts can buy rounded up miles at a penny each. In other words, the same $3.10 purchase in the above example would be rounded up to $4, and you’d receive 90 miles.

While American miles are most definitely worth less than they once were, I’d still pick them up for a penny each. But of course the math isn’t that straightforward, since the math varies based on how big most of your purchases are, and which categories you spend most in.

When deciding whether or not this is worth it, we can’t just look at whether it’s worth picking up American miles at one or two cents each, but also at the opportunity cost of the actual base spend. The Aviator Cards don’t offer great category bonuses, so you’re potentially forgoing quite a few points by using the card, especially if we’re not talking about small purchases.

In other words, if you got the one cent offer, it could absolutely make sense if you always made $1.01 purchases. However, if you often spend $30+ on dining and have a card that offers triple points in that category otherwise, the math doesn’t work out as favorably.

This is an innovative program and I might feel better about it if I got the offer for acquiring miles at a penny each. But at two pennies each I won’t even bother registering.

Did you get this offer on your Aviator Card, and what do you make of it?

Jan 2020 - Just got the Barclay's card for the sign-up bonus (even though I have the Citi Exec World Elite MC card too). The terms for FlightCents are now: "You'll get 1/2 AAdvantage® mile for every 1¢ you round up, up to your threshold amount." Seems worse than the initial 2017 offer.

Joseph, if this is the Barclay Card FlightCents program then you actually PAY for the additional miles, they are not the same as spend a dollar and get a free mile. You pay 2 cents for 1 mile. It's an okay trade. I was lucky to get the pilot program with the better rate and it was a good deal. I am still debating if I sign up now for the program at buying 2 cents per 1 mile for the rounded up amount.

I just learned about FlightCents when I received my statement today. It seems great to me: right now I get one mile per dollar I spend, now I can get 1 mile for every 2 cents. That's a 500% increase! Unless I'm missing something it sounds good to me!