Since the beginning of 2017, my airport experience has gotten significantly less pleasant. Specifically I seem to be on some sort of a list. I guess I shouldn’t be surprised, given the number of countries I travel to. Heck, I suppose I’m surprised it took this long for my activity to look suspicious to the government.

Because I’m on whatever list, my boarding pass always has an “SSSS” on it, which means I receive a thorough secondary screening. 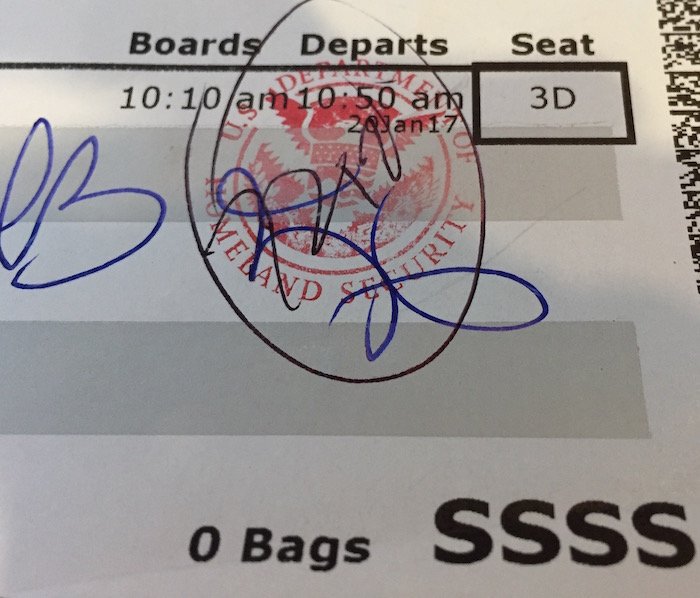 I’ve started the process of trying to appeal this by requesting a Redress number. Essentially you can fill out a form to get your name cleared, and then in theory you’ll be given a Redress number, which should help going forward. While I’ve started the process, apparently it can take a couple of months for the application to even be reviewed, so I’m not expecting immediate results.

So I was expecting to have this issue for a while, though much to my surprise I checked in for an EVA Air flight this morning out of the U.S. and didn’t have an “SSSS” on my boarding pass. This made me wonder:

My assumption was that since I’m on some sort of a list, they’re able to track me regardless of whether or not I put my Known Traveler Number on a reservation (given that for many airlines that’s not even an option). However, that doesn’t seem to be the case, at least not here… which is puzzling.

So did I just luck out? Did I somehow already get off this “list?” Or is avoiding a secondary really as easy as not entering your Known Traveler Number and middle name?

That's...quite a meltdown. Or an elaborate troll. Not sure which.

Is this the beginning of the violation and proliferation of the most basic ethical standard of online discussion boards, which says that a poster should not comment under another's name? Who is stop me from posting as, e.g., "Robert Hanson". It is a dangerous practice that gets posters banned elsewhere for obvious reasons and needs to be stopped right now because some unhinged commenter[s] here, ladies and gentlemen, think[s] it's kosher or cool and will probably continue to do it unless called out on it or banned. An imposter and DCS impersonator just wrote this: "DCS says: February 8, 2017 at 10:31 pm The previous comment under my name must have been made by a follower of mine. Didn’t know I had any! I think he may have overdone his impersonation…I like to think I don’t take myself THAT seriously. I give it an A for effort though!" @Lucky -- It's your site. Only you can do something about this blatant breach of a very important standard. I will not post on this thread again. Any additional comments pretending to be from DCS will be an impostor's [BTW, I am suspecting it is YOU, because only one poster has been unhinged enough to engage in a stunt like this and think it's kosher or funny.] G'day.