Goodness gracious. A Huffington Post contributor published a story this month entitled “Framed, Arrested and Robbed by the Police in Frankfurt: A Not-So Funny Thing Happened on my Way to the Forum in Delhi.” Since the story had a picture of Frankfurt Airport, I couldn’t help but click. The story is unnecessarily long, at over 4,000 words, so read at your own risk.

The lady in question claims to be a professor at Georgetown University, a national security expert, and a very frequent flyer. That makes this story even crazier, in my opinion.

Her version of the story is so unnecessarily wordy and includes so many details that don’t matter, so let me try to boil it down as much as possible:

That’s as much as I can boil down the story in a simple way. I try to be as balanced in these stories as I can. I understand there’s a lot of abuse of power out there. I also don’t want to “mansplain.” But I’m sorry, this lady comes across as a nut.

First she’s super concerned about missing her connection, then she’s willing to miss her connection over a pointless deodorant battle, and in all of this she isn’t exactly acting like a model traveler. Your deodorant has nothing to do with the “Nazi-looking dude over there.”

The woman is now being sued by the German police, as they allege she called them “f*cking bastards” and f*cking German Nazi police.”

Ultimately we don’t know exactly what happened. We don’t know what she called the officers and what she didn’t. Is it possible the police officers may have crossed the line? Perhaps. One thing is for sure, though — the traveler crossed the line. She was unnecessarily argumentative, she went from being very concerned about missing her flight to agreeing to miss it over deodorant, and at a minimum (by her own account) she called someone “Nazi-looking.”

What do you make of this story?

Sure, while in the US the customs agents are the rudest ever!!! I travelled the most diverse countries nad the US are always the most terrible experience when flying back or to there!! The TSA is extrmely aggressive and they yell at you and even often search you after you pass without anything at the metal detector!!! Ahahahah really? You are never "welcome" but it's always an obnoxious experience.

Frankfurt Airport is actually terrible, some of the worst 'customer service' and they could genuinely care less if you make your flight or not. They won't even announce if your gate has changed and leave you sitting in silence. I am hard-pressed to believe everyone in these comment threads hasn't been in a hurry or nervous at an airport before. I could truly care less how nice and cozy my conversation is with her if she's on a business flight and I'm getting in the way. Use ur br41nz

It's an airport lady. And if you're a "frequent traveller," you'd know that for the safety of yourself, and others, you follow the instructions for airport security. She was lucky it was Germany, and not the US, where she might have been deported on the spot! p.s. I live in Germany, and calling anyone a Nazi on German soil, is illegal, a crime, and absolutely unacceptable. 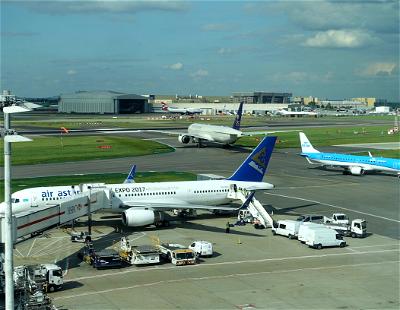