I’ve flown dozens upon dozens of segments in international first class, and they all have one thing in common – I get off the plane absolutely stuffed, for better or for worse. Certainly that was the case on my ANA, Singapore, and Thai first class flights in the past few days.

So I think it’s only fair to report on my flight this evening from Tokyo to Seoul in first class on United. The flight time is over two hours in the air, which is plenty of time to serve a proper meal. The flight departs at 6PM and arrives in Seoul at 8:25PM, so it’s prime dinner time. Tampa to Washington is a similar distance to this flight, and in domestic first class they serve hot nuts, cheese ravioli, a dinner roll, and carrot cake.

Here we have an international flight in first class, and what am I served? 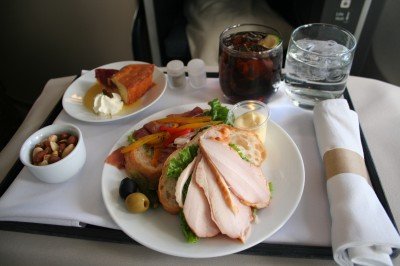 That may very well explain why I’m the only “paid” passenger in first class. There are two non-revs that have been chatting with the Narita based flight attendants the whole flight, getting a couple of “gifts” to go. Hopefully United can retain their business, because they seem to be sending everyone else away. 😉

UA should abandon its internatioanl F product or invest to make it better so that people are willing to pay for it. One should not make excuses for UA that intra-Asia flights are part of the transpacfic itineraries, therefore it is ok to serve a lighter or below average meals in premium cabins. CX operates between SGN and HKG, SQ/CX operate between SIN and HKG, and OZ/NH/JL flyg between NRT and ICN. All these airlines treat these shourt routes as individual market and compete accordingly. While UA seem to do the minimum to keep its slots, rights, and its economy fares paying passengers.

Another way to look at this! UA's NRT-SEL would be an continuation of a US arrival. So most people on the flight would have eaten across the Pacific! Yes, UA is allowed to pick up local traffic in Japan, but its still a service thats on the tail end of a 12-14 hour flight (for most travellers) The meal looks fine to me. One does not expect the same level of service from UA, as they would from KE, JL, NH etc.