Nowadays it’s not often I complain to an airline or hotel. Best I can remember, it’s been at least a couple of years since I’ve sent a formal email complaint.

American is my primary airline, and I do everything I can to compliment employees (whether it’s by emailing customer relations, mentioning flight attendants on Twitter, or giving out “job well done” certificates), because I’d rather be focused on positive reinforcement.

I wrote on the blog about the last time I contacted American customer relations, which was last May after I had a great flight on American, and wanted to compliment the crew.

American customer relations does a great job in responding to Executive Platinum members quickly. Last time they responded to my email within 12 minutes. Unfortunately the response completely missed the mark, and didn’t even coherently acknowledge what I was saying. It’s frustrating when you can’t even praise an airline employee without feeling like you’re being misunderstood, and is a sad reflection of the airline’s “premium” customer response team.

My most recent interaction with American customer relations

I emailed customer relations for the second time in a year yesterday (the previous exchange being the compliment I sent last year), and for the first time in years to complain.

I was flying American’s A321 business class from New York to Los Angeles on Sunday night, and none of the power ports on the plane were working. This was extremely frustrating, as I had work I wanted to get done on the flight, though due to a mostly empty laptop and no power ports, I couldn’t be productive. The crew said that the issue had already been written up on a previous flight and hadn’t been fixed, which is what I find frustrating. To me the most basic amenities available on a plane are power ports and Wi-Fi, and on a transcon flight one is of limited use without the other.

Sure, if I’d known the flight wouldn’t have had working power ports I would have come with a fully charged laptop. But American promises power ports on these flights, so my expectation was that I could charge my laptop onboard. 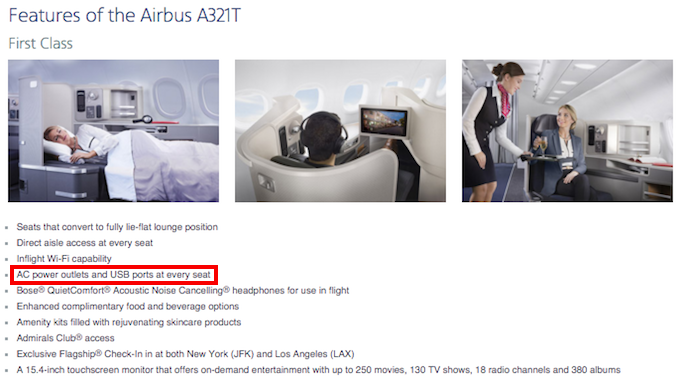 I sent American an email expressing my disappointment. I didn’t even reference that the entertainment was glitchy and froze every few minutes (literally), or that the crew was extremely lazy. Because I generally find it makes sense to stick to the core, black-and-white issue. And that issue is that I wasn’t able to work on a flight with a block time of 6.5 hours because they didn’t have the power ports they promised available.

My point in the email was to say that the power ports on the entire plane were broken, which is terrible for a premium transcontinental flight. Furthermore, I explained that the power issue had been written up on a previous flight, and nothing was done about it.

The response from American

I received an email response 19 minutes after I submitted my complaint. That’s insanely fast.

Unfortunately the only thing impressive was the response time, because just like last time, the response didn’t address my issue:

Thank you for your interest in American Airlines, more specifically, the use of powerports during flight.

We are sorry to hear that there was no power to the power port when you plugged in. Each set of outlets in a row can provide up to 225 watts of power, combined, with a maximum of 150 watts per plug. If one device is pulling its maximum allotment, this leaves only 75 watts for the second plug, meaning there are times where there may not be enough power to run 2 devices. Regardless of the reason why there was no power, we are sorry that you were inconvenienced.

While we can understand your concern about the cabin deficiencies you brought up, we assure you our commitment to safety is absolute. No aircraft is ever permitted to leave the gate with any safety-related item that hasn’t been repaired. There is no relationship between the reliability of customer service items, and the trustworthiness of the safety features of our aircraft.

Naturally you should expect a properly functioning aircraft seat whenever you travel with us. With that in mind and as a gesture of goodwill we’ve credited your AAdvantage® account with bonus miles. We hope you will give us another opportunity soon to demonstrate our ability to make your trip as enjoyable as possible.

We’ll continue to provide updates as American brings you more technology options so that you can be more productive or more entertained during your flight. For more information, please visit www.aa.com/powerports.

Thank you for bringing this to our attention. We hope to have the opportunity to welcome you aboard again soon.

I was explicit that the power ports were broken on the entire plane. But they clearly didn’t bother reading it:

The “gesture of goodwill” they offered me was 2,500 AAdvantage miles. I would have been fine if they offered nothing, if they actually bothered responding to my email in a coherent way.

I responded with the following (strongly worded) email:

I appreciate the quick response, though am frustrated by the lack of comprehension of my very basic issue. I don’t provide feedback to American often, and when I do, it’s typically to compliment an employee.

This is the second time in a row I’ve emailed American where I feel like someone is responding to a different email than the one I sent (the last one, ironically, was to compliment a great flight attendant I had, something which seems easy enough to acknowledge).

What value is there in responding to emails within 20 minutes if they don’t address the actual issue? The response I receive certainly doesn’t make me feel like my frustration for not being able to work for six hours is understood, or the importance of American delivering on their promises (you reference aa.com/powerports, which explicitly says there should have been power available on the flight).

Unsurprisingly, I didn’t get a response time of 19 minutes to the above email, and for that matter haven’t yet heard back.

While a small sample size, having my only two interactions with American customer relations over the past year be this incompetent leaves a bad taste in my mouth. Is it that tough for them to acknowledge a very basic issue and pledge that they’ll get it fixed?

If this is how they respond to Executive Platinum members, I can’t imagine how non-elite members are treated.

What has been your experience with American customer relations? Am I off base in my frustration?

American Airlines is responsible for me missing my 25th high school reunion, being late to my 30th and my sister missing my graduation ceremony for my masters degree. My mom made the trip, but on the way home she flew American. I requested special assistance for her as she had connecting flights. The porter who took her to the gate left her, and there was a gate change. My mom missed her flight. As she was disabled, she had to wheel her wheelchair to the nearest gate agent, who rebooked her and then told me to call American immediately, as this was not the first time it had happened. I also used airmiles to get her a seat in the front so she would not have far to walk. She was rebooked in row 21 on the new flight. I will never fly them again. There is no excuse for this oversight, as the gate agent should have noticed a passenger with special services was on the flight and since there was a gate change, that she may have possibly been at the other gate. No excuse. I'm waiting for their response.

My wife and I have been AAdvantage members since 1993. We have been loyal members, booking the majority of our domestic flights with AA. No more! Last August I booked RT flights to Kauai from Washington DC. The vacation was set for Feb 9th, returning Fed 24th. Celebrating my wife reaching her 10 years of remission of ovarian cancer. In November AA changed the flights and had us flying into Honolulu, instead of Kauai. I then changed our flights. I was using miles so that wasn't an issue. AA refunded my seating upgrades to my credit card. All good so far. I upgraded our seating, and charged our credit card. In Jan my cardiologist suggested I cancel our plans due to Covid. We are 72 y/o. AA returned our miles, but flat out refuses to return our seating upgrades! $470.02! The say they are entitled to keep it, even though they said any flights will be refunded due to Covid19. They tell me that should we book any future flights that I can apply for an exception refund, and they will consider the request. THEY WILL CONSIDER IT! Consider giving me back our money. Congratulations on 10 years of remission of your ovarian cancer, but we are keeping you $470!

I am scheduled for an international flight---my first in two years--having just been vaccinated. The ticket reads British Airways, but American Airlines is responsible for the return international flight from London to Philadelphia on July 3. I had no problem pre-paying for advance seating on the European sections of the trip through British Airways, but American Airlines insisted that only the travel company could deal with my ticket. The travel company, Travel Up, said they could not assign seating, and British Airways said they could assign seating only on the segments of the trip not operated by American Airlines. I called 800 433 7300, and after waiting on hold for a very long time, a recording stated that the wait time would by FOUR HOURS, and they would call me back. Four hours later, when I received a call back from a gentlemen, I asked whether I could use my American AAdvantage points to upgrade to first class on the international segment from London to Philadelphia. He said yes, and transferred me to International AAdvantage. After remaining on hold for more than an hour, Mrs. White of American Airlines said that I would have to contact the travel company for use of my AAdvantage points to upgrade my seat selection (obviously not true), and that if I asked her to do it, AA would charge me $50. Clearly, this run-around makes it impossible to use your AAdvantage points---which seems to be their plan. Now, less than 10 days from my flight, I will start my international adventure with a middle, crowded seat, and a conviction to never use American Airlines again if I can avoid it.