I feel like this might be the latest source of controversy on planes, for all the wrong reasons.

American Airlines has announced internally that employees can wear Black Lives Matter (BLM) pins on their uniforms while on duty. Typically airlines have strict uniform standards, and pins can only be worn if explicitly approved by the company.

It’s worth noting that American isn’t the first airline to authorize these kinds of pins to be worn, as Delta Air Lines not only allows employees to wear BLM pins, but there are actually custom Delta BLM pins.

As Jill Surdek, American Airlines’ SVP of Flight Services, said regarding this change:

“American is truly committed to having an inclusive culture that is welcoming to all and a reflection of our country and world. One symbolic way to show our support is through a uniform pin. We are working with our Black Professional Network on designing a specific pin that may be worn with the uniform. In the interim until this pin is produced, to recognize the significance of this moment in history, we are allowing people to wear a Black Lives Matter Pin.”

It’s worth noting that American Airlines also has approved pins for Christians, veterans, and LGBTQ groups.

The company clarifies that this isn’t intended as a political cause, but rather as a universal cause about humanity and equality:

“Fundamentally, Black Lives Matter is an expression of equality. It doesn’t mean other lives don’t matter, rather that in our society black lives should matter and be valued the same as others. That’s not political.”

Some American Airlines staff are offended by this

The New York Post is reporting that this move has “irked” some of American’s employees in New York, including those who have relatives who are cops. As one flight attendant said in an email to airline management:

“I take offense to this. Serious offense. My husband is a LEO (Law Enforcement Officer), as was my deceased father and as far as I’m concerned ALL LIVES MATTER. I am completely disgusted at the fact that we can’t show support for our GOD, our COUNTRY, our LEOs but when it comes to BLM organization (which is controversial in itself), American Airlines says that’s obviously different. And we can. How is that right? Well, I don’t feel included.” 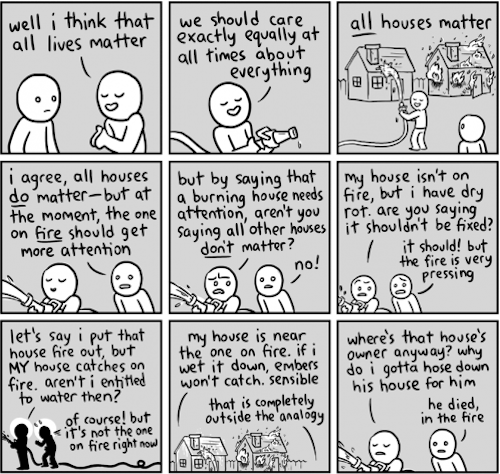 Another flight attendant claimed that those who refuse to wear this pin will “be ostracized and labeled as racist.” He also described BLM as “a terrorist organization that promotes violence to further their agenda.”

Based on what this guy is saying, I’m guessing that it won’t be his lack of wearing a pin that gets him labeled as a racist…

I’m seeing people all over Twitter threaten to boycott American Airlines. Let’s ignore the merits of the Black Lives Matter movement for a moment…

If you’re triggered by the phrase BLM and are going to boycott airlines over this, then you’re going to have to significantly rethink your transportation strategy:

So, um, I think your transportation options going forward are probably quite limited. You’ll have to walk, and even be careful which shoes you choose to wear.

To those who are suddenly boycotting American Airlines over allowing employees to wear pins, why is this the final straw, and not all of the previous things the airline has done to show support for the organization?

If this is specifically what causes you to boycott American Airlines, then, well, I’m confused… on the plus side, if people follow through with their boycott, maybe we’ll see fewer mask incidents on planes?

Employees can wear BLM pins but passengers can’t wear maga hats.what is wrong with these people

Oh -now I know why I only fly Allegiant . HOW can you say a BLM pin is ok -but a Blue Lives Matter isn’t ?? You’re literally saying one cause has more validity than another -and a COMPANY has NO right to tell it’s employees what issues should matter to them as individuals . This is ALL corporate posturing -“look how socially conscious we are”. Give us ALL a break - truly .