Earlier today I posted about Delta’s announcement that they would be cutting elite benefits for Alaska MVP elite members traveling on Delta flights as of May 1, 2014.

For MVP Gold and MVP Gold 75K members, the following benefits are being cut for travel on Delta as of May 1, 2014:

Meanwhile for MVP members, the following benefits are being cut for travel on Delta as of May 1, 2014:

It appears as if this was reciprocal devaluation, and that Alaska is also cutting elite benefits for Delta SkyMiles Medallion members. Specifically, if you go to the SkyMiles partner airlines elite benefits page on delta.com you’ll see the following update:

So Alaska is cutting baggage fee waivers and priority security lines for Delta flyers traveling on Alaska. Alaska doesn’t offer priority baggage handling (all their bags are guaranteed to arrive within 20 minutes), Economy Comfort discounts (since they don’t have such a cabin), or Zone 1 boarding (since that’s just a general boarding group for Alaska), so they matched these changes as closely as they could. 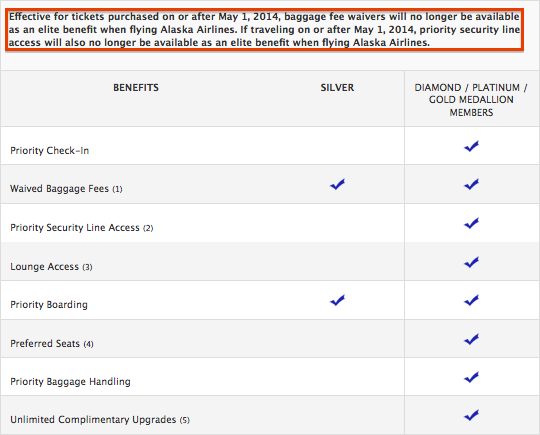 At the same time I can’t help but find it a bit funny that they’re still offering reciprocal upgrades and elite mileage bonuses for travel on the other carrier. Perhaps that’s part of their partnership contract which they can’t alter.

@Anthony You must have AA confused with Delta. AA DOES give complementary upgrades on their JFK-SFO/LAX transcons - I just flew that route last week (LAX) and was upgraded. I'm an EXP on AA (You would need 500 mile stickers for GLD/PLT as is the case on other AA flights).

In recent weeks, I've flown American and Delta, crediting flights on both to Alaska. One segment on AA was in first, the rest in coach (two in premium economy). Both are comparable, but Delta is slightly better for the overall in flight experience IMO. If American gave out complementary upgrades on its new JFK to SFO/LAX transcon, I'd switch immediately, but they don't, so I'll continue flying both and crediting to Alaska as long as I can...

@ Phillip -- It (almost) wouldn't surprise me, given how many OneWorld airlines they already partner with (and to further thump their nose at Delta).

32
Hotel Club Lounges: Why I Value Them So Much