Well this looks… unpleasant. As reported by BBC, Air India Express flight 611 was scheduled to travel today from Trichy to Dubai, when it sustained some significant damage on takeoff.

The flight was operated by a Boeing 737-800, and hit a wall on takeoff. Like, actually. Here’s the wall: 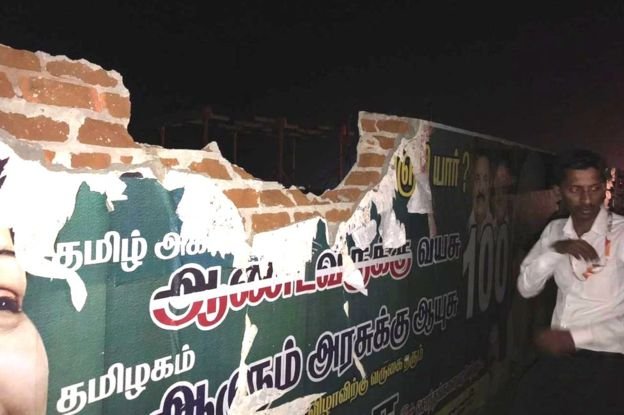 And here’s the plane: 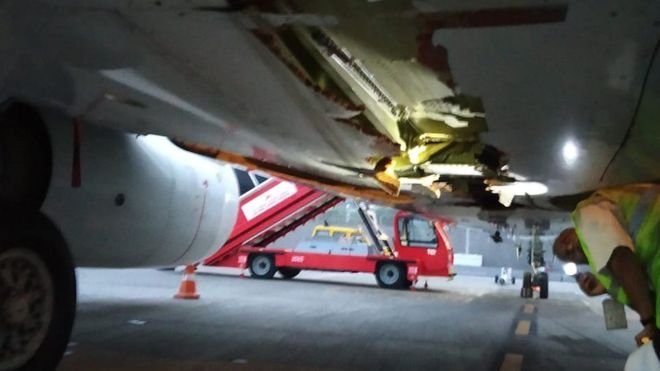 The flight had 130 passengers and six crew, and ended up diverting to Mumbai. Mumbai is nearly 700 miles from Trichy, so I’m a bit confused about why they decided to fly so far with such significant damage.

It’s not yet clear what exactly caused the incident to occur. The runway in Trichy is 6,115 feet long. While not long, it should be sufficient for a 737-800 to take off.

Air India has said that the two pilots had more than 6,500 hours of flying experience between them (which isn’t that much), and that they’ve been grounded pending an investigation.

As the incident was described:

I’m still trying to make sense of what could have happened based on the pictures. The major damage is in the bottom of the fuselage, though the hole in the wall doesn’t look big enough for the fuselage to have flown through it. So I’m not sure exactly what happened there.

When I first heard about this story, the first thing that came to mind was the Qatar Airways “incident” at Miami a few years back, where a 777 hit the runway lights at the end of the runway on takeoff, due to performing a midfield takeoff. That incident caused a 46cm tear in the fuselage and 90 dents and scratches, and the pilots continued operating the flight all the way to Doha, not having realized what happened.

In these parts, drunken pilots have recently taken off airplanes preparing to depart (this of Fly Dubai KTM DXB). South Asia and Southeast Asia are the wild west of aviation safety.

Actually the belly of the aircraft hit the ILS as well as the boundary wall damaging both and the fuselage of the aircraft. The pilots did not realise this and continued flying towards DXB. Meanwhile TRV airport staff after inspections of the damage on ground informed the higher authorities who took the decision to divert the flight to BOM as they obviously did not want the plane to be stranded in DXB for repairs. When the pilots were informed to divert they were near MCT having flown almost 3 hours. By the time the flight landed in BOM it had flown a total of 4 hours with a hole in its belly! So this was not a nearest airport diversion it was a more precautionary step to get back the plane to its base. A highway runs parallel to the runway boundary wall with the aircraft flying so low there was a possibility of clipping some vehicles on the highway also.

Details are still a bit sparse in this article, but to interpolate, I’m guessing it hit an antenna which in turn damaged the wall. http://avherald.com/h?article=4bedd321