So I’m staying at a certain Heathrow Airport hotel where the Qatar Airways crews also happen to stay. Now, you don’t even have to open your eyes to realize that they stay here. Instead, five times a day the lobby smells like Bath & Body Works, and that’s how you know the crews have arrived. 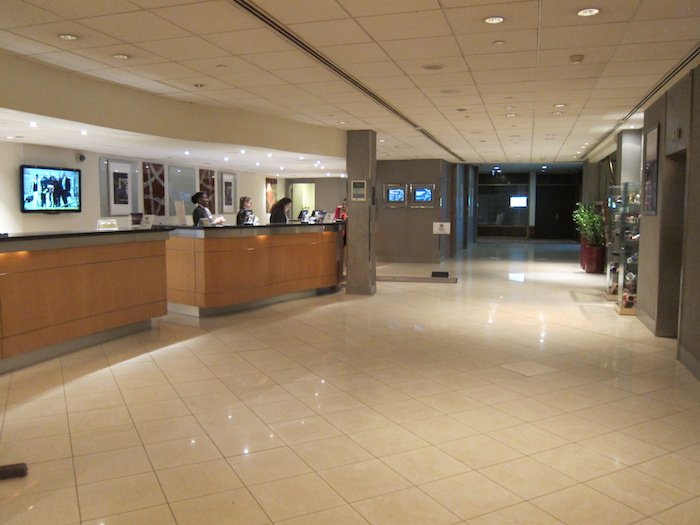 It’s pretty common for captains at many international airlines to get hotel club lounge access during layovers.

When I visited the club lounge I noticed that it was basically just me and some Arabs, and eventually I connected the dots — they were all Qatar Airways pilots. 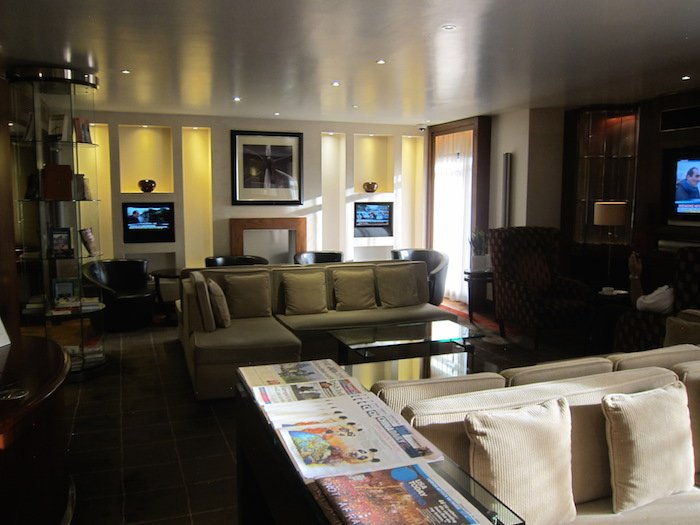 Last night I was in the club lounge, and it was literally just me and six Qatar Airways pilots. I sat in the corner with my laptop, while they sat at the longer table with eight chairs. 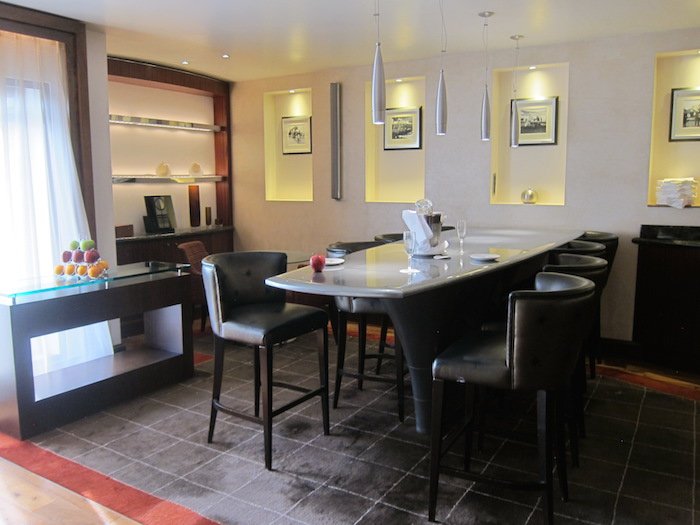 The dynamic between them was absolutely fascinating.

At the beginning there were four of them, and they were just chatting in Arabic. The only thing I heard in English was “A380,” “A319,” and “777.” One guy clearly had the confidence of a human tripod, so not surprisingly he was the A380 captain.

Eventually another guy walked into the lounge, and they did a round of introductions. They didn’t know one another, but they all introduced themselves by their aircraft type.

Then another guy walks into the lounge, and I hear him say “A350.” The other pilots nearly fell out of their chairs when they heard that, and one responded with “aren’t you supposed to be in Toulouse?” As it turns out he operated that mysterious A350 flight that I was hoping to hitch a ride on, as Qatar Airways is doing some noise testing at Heathrow.

Things then took a turn for the more interesting. A British guy walked in, and he clearly knew one of the pilots, but not the others. He introduced himself to the other pilots, and explaining he flies the A340. One pilot was kind of nice to him, a couple sort of acknowledged him, and one literally refused to shake his hand or acknowledge him. It’s pretty normal for there to be cultural clashes among cockpit crews, and that seemed to be the case here.

Overhearing their conversation was really interesting. Topics of discussion included:

His Excellency didn’t even come up!

Anyway, I know I’m kind of weird, but one of my favorite things at airport hotels is guessing who is airline crew and which airline they work for. In this case it was apparent, though I found the dynamic between the pilots to be interesting. Many pilots are notoriously introverted and don’t hang out with their colleagues on layovers.

In this case it was the opposite extreme, where several pilots from different flights all hung out together. And there was an inherent hierarchy in the group based on which plane they flew. Perhaps a coincidence, but the A380 captain was dominating the conversation, while the A319 captain just kind of sat there.

Are my Saturday nights exciting or what?! 🙂

Perhaps the reason we still have one of the safest (or THE safest, as some would have you believe) and the longest continuously operating airline in Qantas, is that Australia is arguably the most un-hierarchical society on Earth. Australians greatly and vociferously resent, and simply will not tolerate people placing themselves ‘above’ others - despite the fact that we are still a British dominion, we oddly have a very French, classless and egalitarian view of things here! (perhaps why we are one of the few English speaking nations the French generally are rather fond of!). Maybe this is an insight into how and why Australian pilots (regardless of skin colour) are amongst the most sought after in aviation and also amongst the most widely used.

@Randy/Rob I couldn't agree more with your sentiments, opinions and facts. I avoid flying with airlines that don't have a pedigree earned from many years of discipline and safety The fact that Lucky perceived a hierarchy among these pilots is a problem. Hierarchical dominance in the cockpit derived from the culture of the country has resulted in numerous major disasters. Take a look at Malcom Gladwell's Wall Street Journal article on this topic: http://blogs.wsj.com/middleseat/2008/12/04/malcolm-gladwell-on-culture-cockpit-communication-and-plane-crashes/ The comment he made about Americans being the source of all the world's problems is disappointing and depressing. I am weary of hearing these unbalanced generalizations about my country. I wonder why Qatar wants to extend their reach into the U.S. ...they must find a lot of people who want to come to this evil place and they must love our money.

@BBK +1 So glad you said it. It is just amazing how some people see racism in any and every comment, they're the racists in my view because they ONLY seem to racism in every situation or comment. I grew up in Dubai in the late '70's & '80s, my Dad flew 707's & 720's for the ruling family out of the "Dubai Royal Airwing" at Dubai's only airport at the time. The pilot's were 99.9% from Europe, the U.S or Australia. Now why wouldn't the ruling family use their own Arab pilots back then? Two reasons as my Dad (who spent almost 10 years flying the royals around) put it: 1. The royals only wanted the best pilots and those were WESTERN pilots...not necessarily WHITE pilots...WESTERN pilots. They were better trained and disciplined, especially back then and the royals knew it. Have some middle eastern nations and airlines caught up? Absolutely. But do they have the years of experience and discipline in commercial aviation like western nations have had? Nope and it will take some more time before they do. 2. The royals were also terrified of sabotage or "suicide by pilot" back then due to ongoing tribal differences in the UAE and fractious relations with some regional Arab neighbors. Back then the divide between Abu Dhabi and Dubai was considerable and the UAE almost broke apart on a number of occasions due to old tribal rivalries and distrust. I have no idea what the national makeup of the pilots currently flying the UAE royals around today is, although it would be interesting to see if they too are still as "racist" against their own people as they were back then "apparently". Speaking of suicide by pilot, let's not forget that the only time that seems to have happened in recent memory was Egypt Air 990 from JFK in '99 , Silk Air 185 in '97 (probable), Royal Air Maroc 630 in '94 and more recently LAM Mozambique Air 470 (obviously not a middle eastern carrier but not a western one either). Also, a leading theory, and admittedly only ONE possible theory, is that the disappearance of Malaysia 370 is possibly due to pilot "intervention". So given these facts why is @Randy's comments seen as racist and deserving of such condescending derision? Given the historical facts in most of these crashes, @Randy has very good reason to feel nervous flying on an Arab airline. I just got back from flying Korean Air to Thailand five days ago. On all four of my flights it was obvious the captains (from their announcements and heavy accents) were Korean. On numerous occasions they used improper vocabulary and overall, were deficient in their English communication skills, not a big deal on PA announcements but a bigger deal on ATC com's for sure. Did this make me feel slightly less safe as all ATC com's are in English? Sure, a little. Does that make me a racist? Ummm, no and my Chinese wife who was on all these flights happens to agree with me. @Mack & @Peter, you guys really ought to get your vision checked to see if there are some corrective lenses out there somewhere to help with YOUR obviously racist view of the world.