In mid-October I wrote about the incredible oneworld transatlantic business class fare sale, whereby we saw many transatlantic routes bookable for as little as ~$1,300 roundtrip. That’s amazing, especially since they qualified for a limited time promotion offering bonus miles for transatlantic travel. 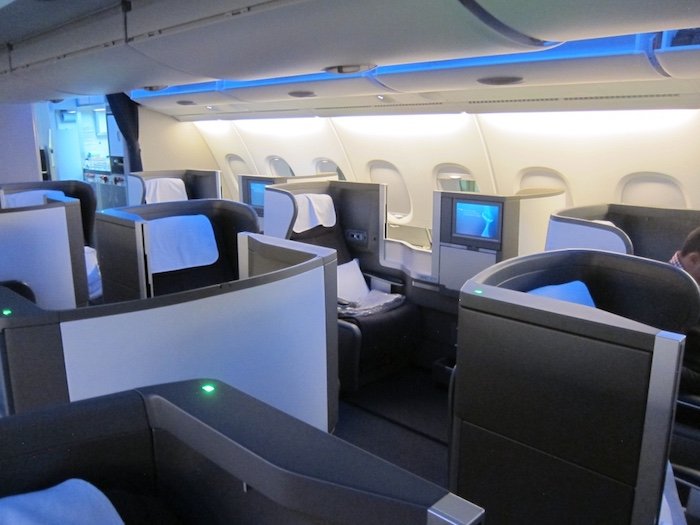 While I try to be objective and point out both the good and bad of airline products, it’s not often that I actually passionately dislike a product. Well, in the case of British Airways business class I can’t say enough bad things about the experience. 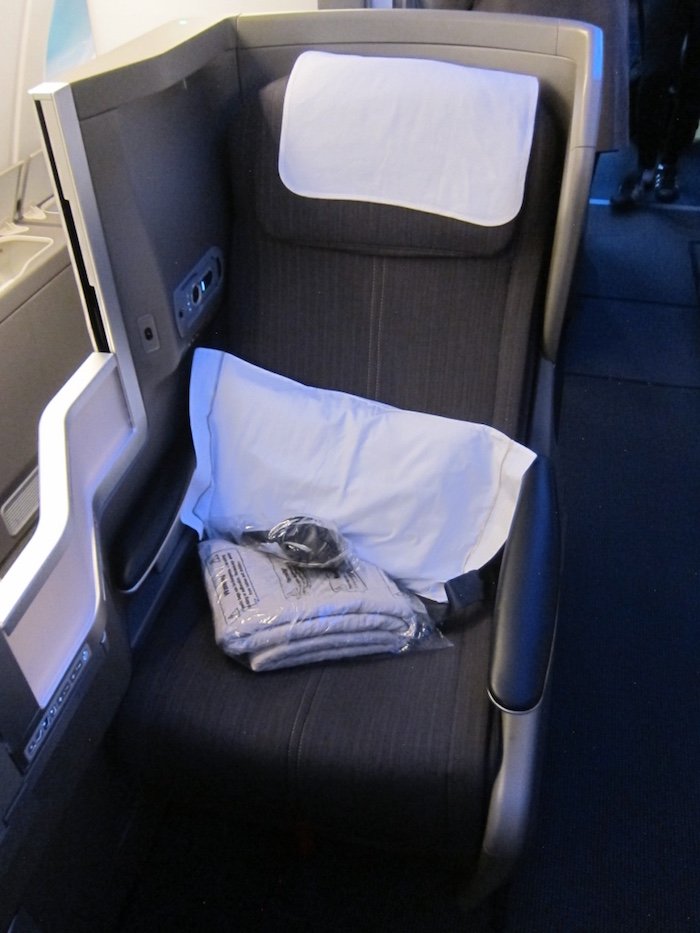 I’ll have a full trip report soon, but for now I’ll focus specifically on the service (let’s forget for a moment that there are pieces of paper thicker than the pillows they offer in business class, that the seats have about as much privacy as a stage with a spotlight, and that the food is unimpressive as well. 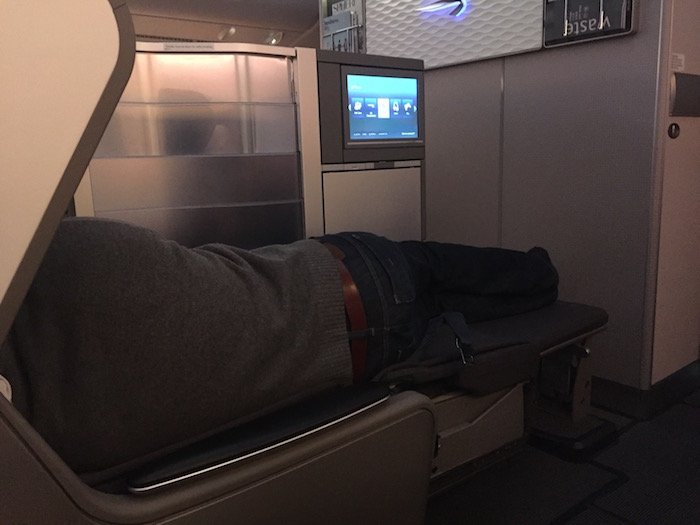 People complain about service on US airlines and how not put together the crews look.

This flight had the most unsightly crew I’ve ever seen. Like, they made the American crews working Beijing to Dallas look like Etihad crews by comparison.

I don’t fault the crew for being senior, but rather that they just looked frumpy and like they just got out of bed to work the flight. Everything about the flight attendant working my aisle was a mess, including her appearance. I’d be shocked if she bothered to shower or brush her hair before working the flight. Emirates does appearance checks before every flight, and I can’t help but feel like British Airways would benefit from the same…

But let’s forget that, but rather focus on the “substance” of the service. She was possibly the worst flight attendant I’ve had in my life. Not only was she rude, but she had zero knowledge of their product.

Let me give a few examples:

“We don’t have that”

The flight attendant came around to take meal orders.

Maybe you should look at the menu off of which your passengers are ordering then? Like, there are only two choices of starters, is it really that tough to have a basic understanding of both?

During the meal service she came around with a bread basket that had maybe five types of bread. I pointed at one type and asked “what’s this one, please?” Her response? “Bread.”

During breakfast service there was the choice between a smoothie and an orange juice to drink.

She came around and said “orange juice or… I don’t know what that is… it’s kind of funny looking.”

Like, could she not look at the menu? And there was nothing funny looking about the smoothie… 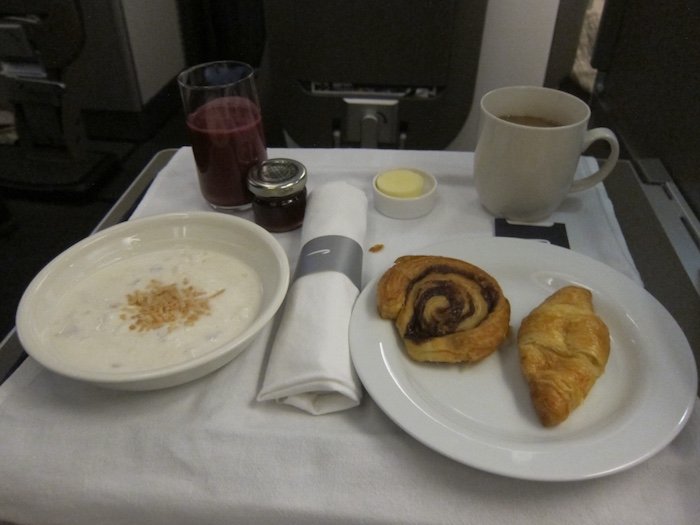 I was seated in the aisle, though she constantly handed me everything rather than placing it on my tray. 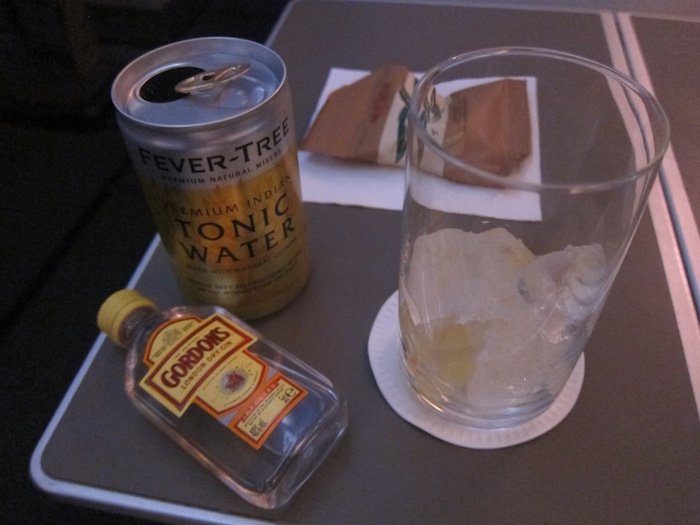 That continued throughout the service.

The guy seated across the aisle from me was watching a movie when she was taking drink orders. He didn’t see or hear her when she asked “drink?” When he took his headphones off he said “sorry?”

This time she raised her voice and in a very agitated way said “DRINK?!”

There are privacy dividers between seats (British Airways business class has no privacy, thank goodness I was traveling with Ford), and the guy across from me was trying to raise the divider as we climbed out. The button wasn’t working (it’s deactivated during the climb out and descent), so he tried to manually raise it. The flight attendant was sitting in the jumpseat a couple of rows away and yelled “you need to stop and be patient, we aren’t at cruise altitude yet.” The tone was just unbelievable. 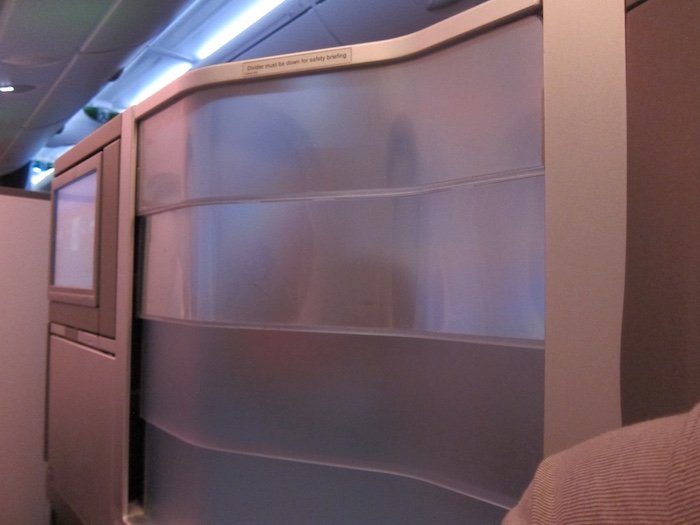 I exchanged a raised eyebrow with the guy across the aisle, as we were both taken aback by her tone.

Admittedly the service varies flight-to-flight, as it does on US airlines. I don’t remember ever having a flight attendant worse than this one, though. Every aspect of her service was just abysmal. Unfortunately the product was extremely underwhelming across the board, from the seat, to the amenities, to the food.

Try getting that kind of crap service in FIRST. Rather than suffer the PTSD, I'll include one, final gem of her behaviour. I paid to upgrade from Club World to FIRST LHR - SEA February 2008. I lost my passport, or misplaced it. We're on the runway in Seattle. I ask her, "Have you seen my passport?" This after 10 hours of disinterested, borderline surly service. No, I didn't think she'd seen it, but one would imagine it's a code for I CAN'T FIND MY BLOODY PASSPORT! "I haven't seen your passport", she says. And walks away. BTW, this was after reverse thrust when it was safe to walk in the cabin. Now, I didn't want to get stroppy with her and explain that until I found my passport I would be unable to exit the aircraft, wh. was British territory. The CSD and First Class purser were on their feet within seconds. The CSD found it. It had dropped over the divider between my seat and the middle seat. The upholstery is navy blue and I was wearing navy blue slacks. But it was the 'sod off, don't bother me', attitude that really ruined the whole experience.

This is exactly the reason I avoid flying club World the service levels are just too inconsistent but even the good ones are still below most other major airlines. The last time I flew with them I wasn't able to get any of the options I wanted on the menu because "We are full you know!" and when I requested water I was told it was available in the club kitchen if I wanted any. Charming. I would much rather pay more for Korean Air and have a good experience with excellent service. 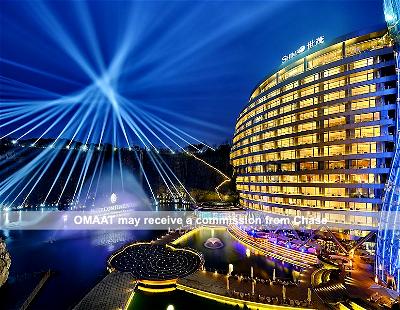