US airlines aren’t exactly known for their service or passenger experience. Heck, Emirates came out with an ad last week which pokes fun at exactly this:

I get why service is often indifferent on US airlines. I really do. Historically airlines haven’t shown much respect towards their employees, passenger behavior seems to get progressively worse, and with seniority being the main metric which matters, employees don’t have much of an incentive to go the extra mile.

That being said, what I can’t rationalize is why there seem to be so many airline employees who are downright hostile. Employees who seem to go out of their way to make customers feel unwelcome, who put effort into being rude.

I can’t think of any other businesses — hotels, restaurants, retail, etc. — where you see employees downright hostile in the same manner it happens in the airline industry. And unfortunately it mostly happens under the guise of “security.”

Case in point, I was flying from Los Angeles to New York in American’s A321 first class. 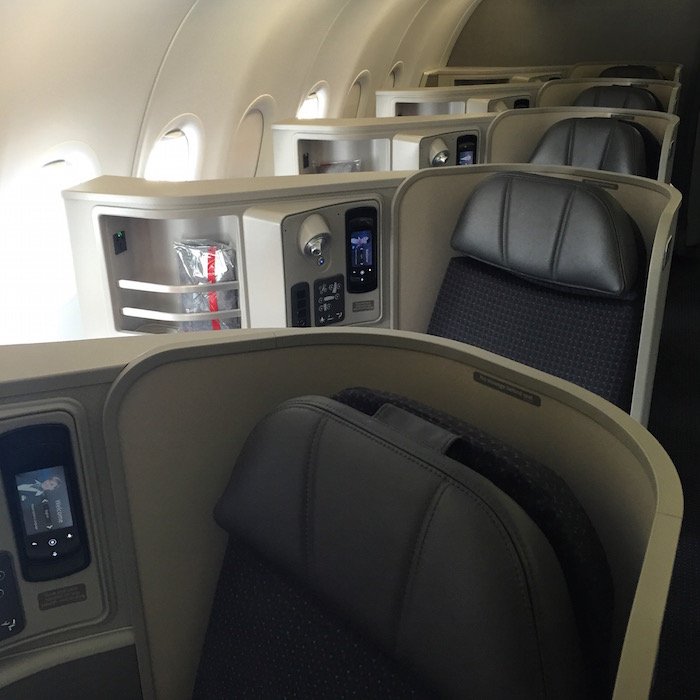 I arrived at the gate a few minutes after boarding started, and the guy in front of me was being pulled over by the gate agent, apparently because he had three carry-ons. Here’s what I heard:

Gate agent: “Sir, you have too many bags, you need to check one.”

Fair enough. The rules are the rules, and he did have too many carry-ons. But it’s about how you handle it. As it turns out, his friend was traveling with him, though he was separated in the boarding queue by a couple of people.

Here’s the conversation which followed:

What’s not conveyed in the above is the pissy tone with which she communicated with the guy, while he was being friendly.

This is just one small instance, but it’s an overall theme I notice in the airline industry more than any other industry. Don’t get me wrong, there are some fantastic, passionate employees in the airline industry. But there are also employees who go out of their way to disrespect passengers. And I just don’t get it. Because being bitchy and trying to justify being wrong takes energy.

I also feel I should point out that 15 seconds later I was greeted at the door of the plane by one of the friendliest pursers I’ve ever interacted with. He was pleasant, friendly, and clearly wanted to make everyone smile, even at 5:30AM. He wanted to be there, even before dawn on a Sunday morning. Quite a contrast from the draconian gate agent…

Dear hostile employees in the airline industry: could you please make an effort to be lazy rather than hostile?

In the above case, the gate agent was in the right by telling the passenger he had too many carry-ons. But when his friend offered to take one of them, she should have just let it go. And even if she did want to ask the follow up question to make sure they were actually friends (which seems ridiculous to me, but…), she should have stopped there. Instead she made up a further rule for why the guy couldn’t take one of the bags on the plane his friend, because she just couldn’t bear the thought of being wrong.

I'm resting here at Sea Tac International sitting on the floor waiting for a loan and going to fly off somewhere just haven't decided where, and no where to sit, very rude and hostile airport young employees but not in security. Alot hangout as going out of their way to be disrespectful and rude to all customers

I agree with much that has been said here. The bottom line really is this. It doesn't take anymore time to be pleasant and courteous than it does to be overbearing and rude. Granted, maybe the impending passenger either didn't know the exact rule regarding carry ons, or did and though they could get by with it. Understandable reaction from the airport agent, BUT, why not keep a sense of humor about it all. Get that friend that offered to help back into the scenario, and get it all taken care of according to your airline standards, AND do it in a friendly, "oops this is how it works" manner, and let's get everyone straightened out here. I don't want to blow the horn for our Southeastern States, and I'm sure we have some exceptions, but overall, that kind of rudeness would not go over here in North Carolina where we absolutely pride ourselves on courtesy and patience. But really airlines, can we upgrade all total and treat customers with a little more patience and understanding?

I have been an airline reservation agent (over the phone) for the past 5 years, and there are some great arguments on both sides. First, with regard to airline employees being more friendly in other countries, you may be exactly right. But, I can tell you without hesitation that foreign passengers are, on average, far more polite and friendly from the very beginning on the phone. Don't get me wrong, I know broad stereotypes are dangerous. But, taking about 50-80 calls a day, 5 days a week, for 5 years, I can count on one hand the number of passengers with British or Australian accents that were rude to me. I rarely get into any arguments with passengers, but I sit near many people that do. I know that acting like that would just make me miserable. And, I would say it's the 5% of the angry callers that can sour an employee into being less than their best self for the other 95% which is a shame. With all that said, there is very rarely a situation when an airline employee is justified in being rude to a passenger. Threatening an airline employee is no ok. Getting personal about an issue also is never helpful. I've had to grab the headset from female employees that are called "bitches". In one instance, a passenger said, "I bet you are a horrible mother" to one of my co-workers. On the side of the passenger argument, I see/hear rude behavior from airline employees almost daily. But, just like passenger behavior, I would argue it's the 5% of the poor employees that cast a negative shadow over the 95% who care. As one of the people that posted earlier pointed out, people tend to forget all their positive experiences with airline employees.

5
Great Deal: World Of Hyatt Selling Points For 30% Off