For the past several years I’ve been participating in the SPG Amex Stars program, which has taken me to some pretty awesome places. I love the Starwood Preferred Guest® Credit Card from American Express, and it’s one of the cards I’ve had in my wallet for the longest amount of time. It was one of the very first cards I applied for when I was 18, and I’ve had it ever since.

One of the annual events I attend for being part of the program is the US Open SPG Amex Cardmember event (which I’ll talk more about in the next installment). As part of that, the Starwood American Express covered the cost of my two night stay at the Westin New York Times Square. Now, I wasn’t asked to review the hotel or anything, though I’ve been staying at this hotel every year for the past several years, and wanted to report back on it, since I haven’t reviewed the hotel since 2012.

Let me start by saying that Times Square isn’t my first choice for where to stay in New York City. I grew up in New York, so I think any person who has visited the city can agree it’s not the ideal place to be (perhaps aside from a first time tourist who is fascinated by it). The good news is that the Westin is over a block from the center of Times Square, so you’re not totally subjected to the madness. Still, the hotel wouldn’t be my first choice in the city, given the number of awesome Starwood options there are.

The Westin Times Square has undergone some serious renovations over the past few years, and I’m really impressed. My mom and I stayed in a grand deluxe room for two nights, which was my first time in this room type.

While these rooms are in the same building as the rest of the rooms, they’re in a separate area, overlooking an atrium. I actually didn’t realize this area with an atrium existed until this stay. 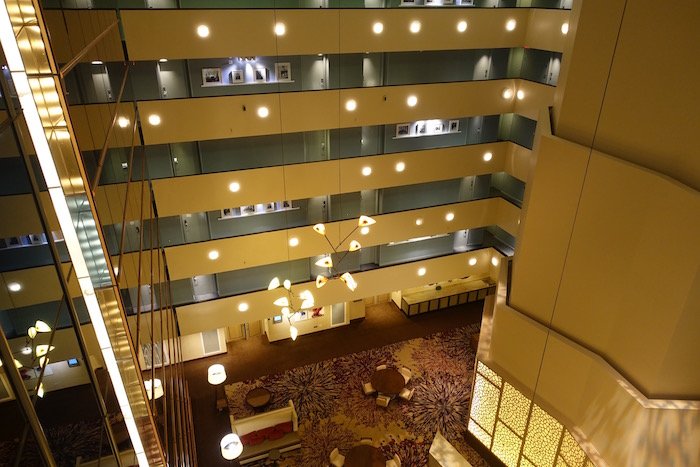 The atrium covers just a half dozen (or so) floors, so there are maybe a bit over a hundred of these rooms. 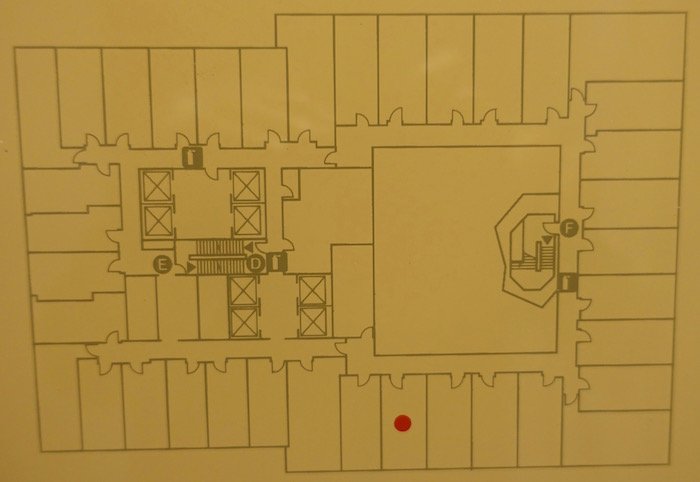 The rooms were gorgeously appointed — they felt fresh and modern, and I loved the tones in the room.

Upon entering there was a closet to the right and the bathroom to the left. 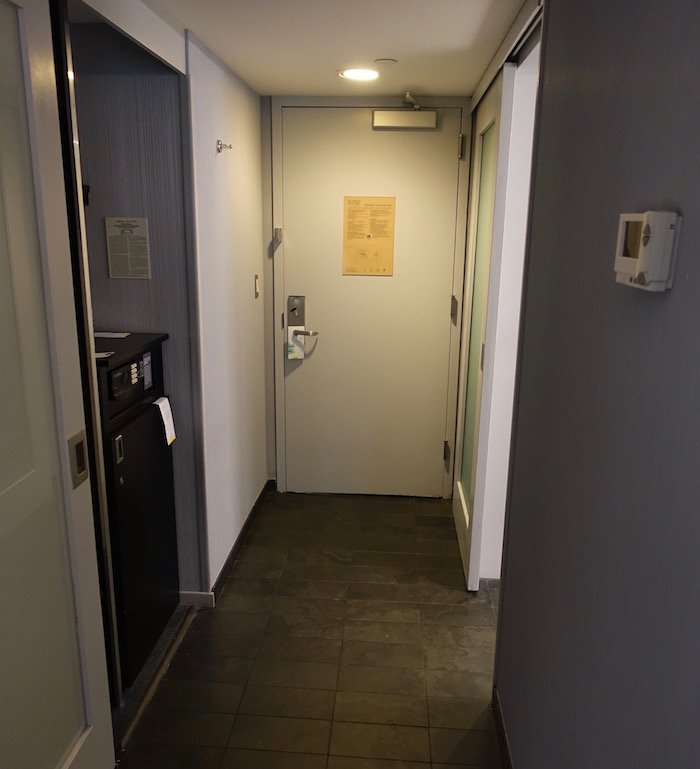 The room featured two Westin Heavenly Beds, which are among the most comfortable beds out there. 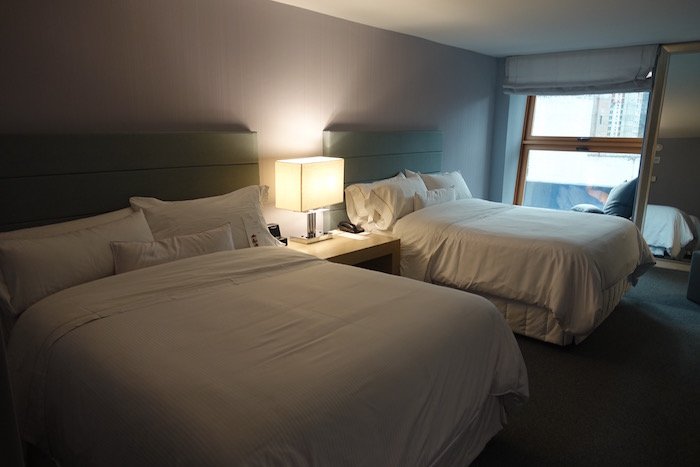 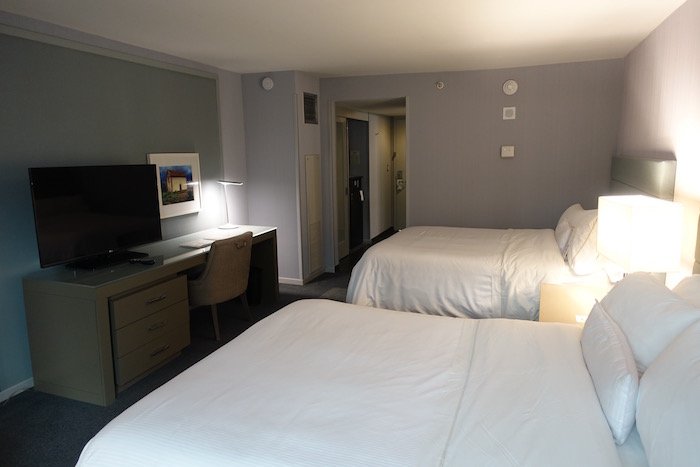 It’s especially nice to find a room with two queen beds, which is somewhat rare (typically rooms with two beds are either twins or doubles, in my experience). 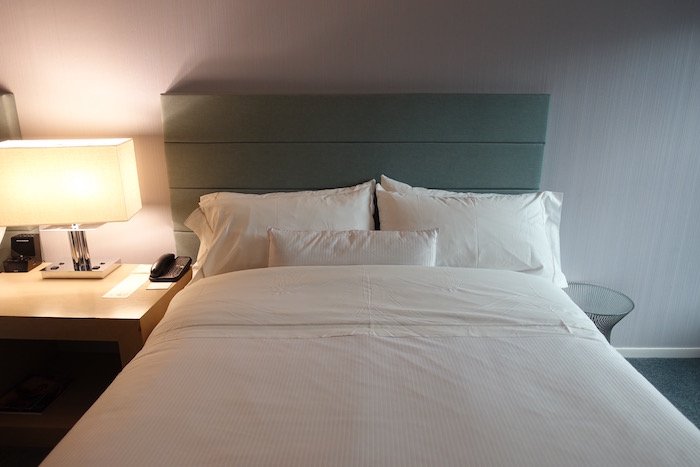 Across from the beds was a desk with a comfortable chair, as well as a flat screen TV and some storage. 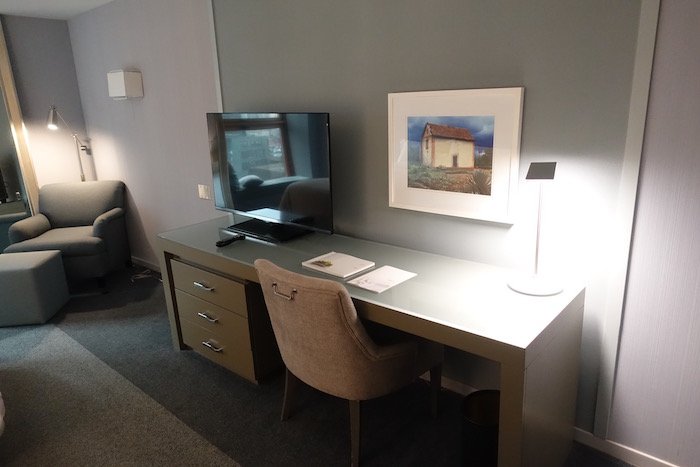 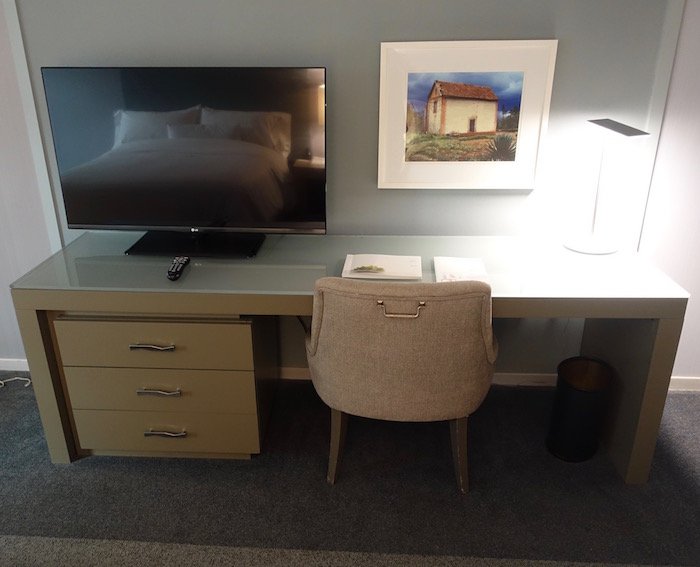 Then past that was a comfortable chair with an ottoman, which had a lamp behind it. 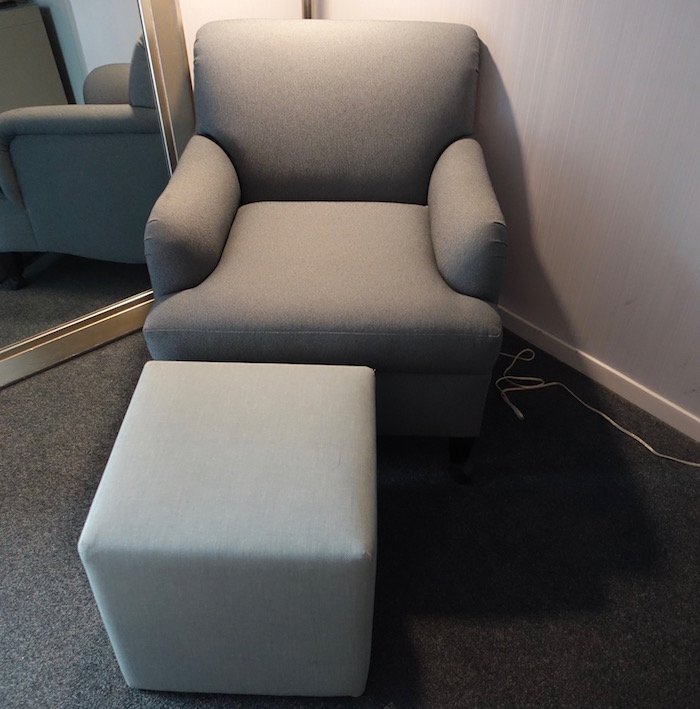 The window had a nice padded bench by it. 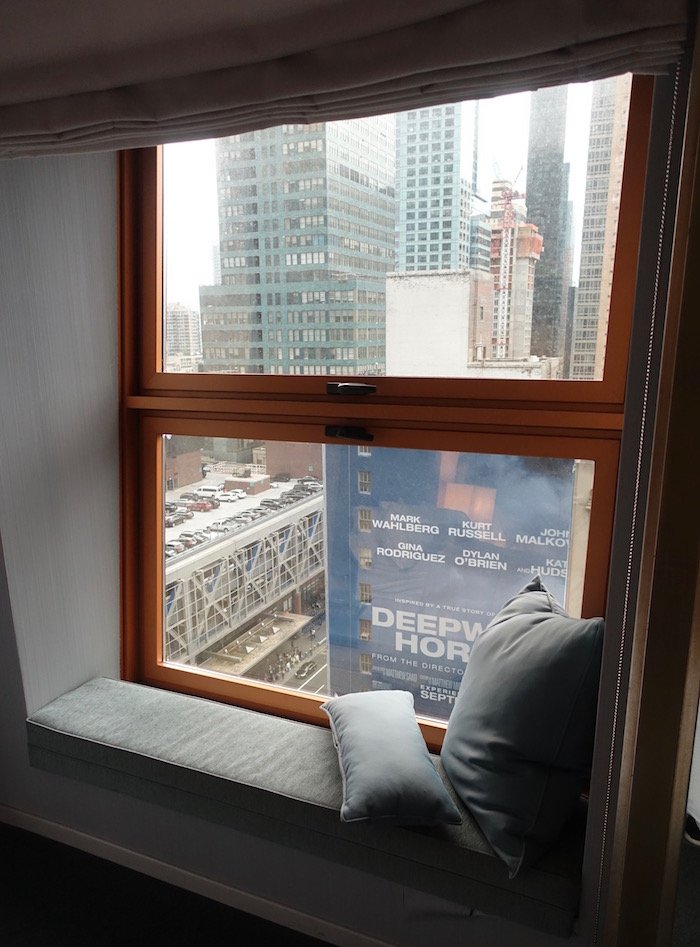 The view from the room wasn’t especially inspiring, though at least it was fairly quiet (I prefer that to facing the noise of Times Square). 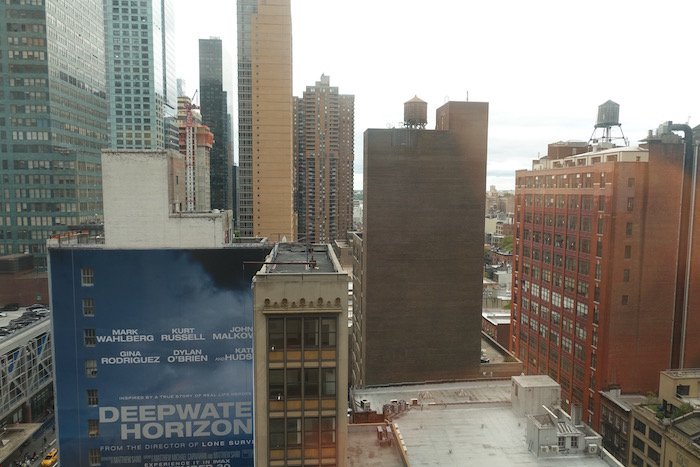 The room had complimentary Starbucks coffee and bottled water. 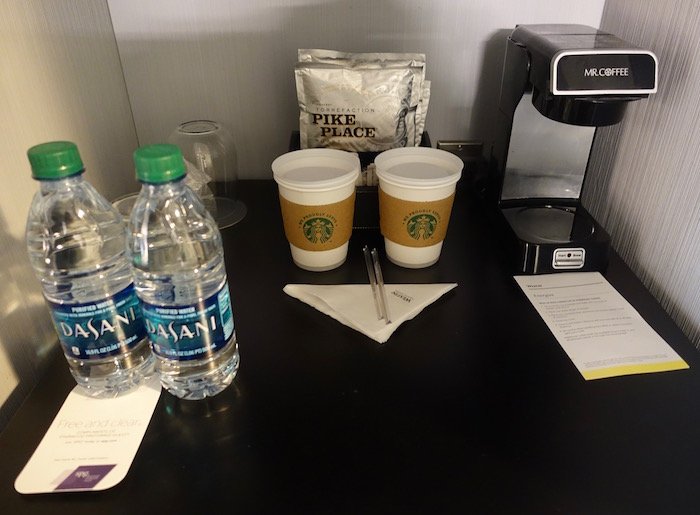 The bathroom was a very good size, with a sink, toilet, and shower/tub combo. 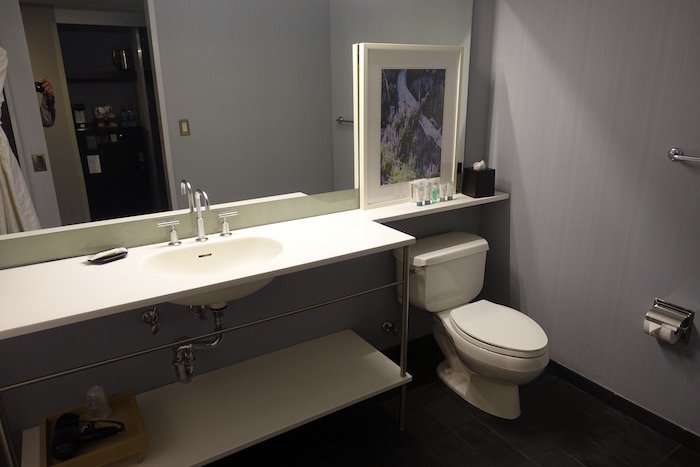 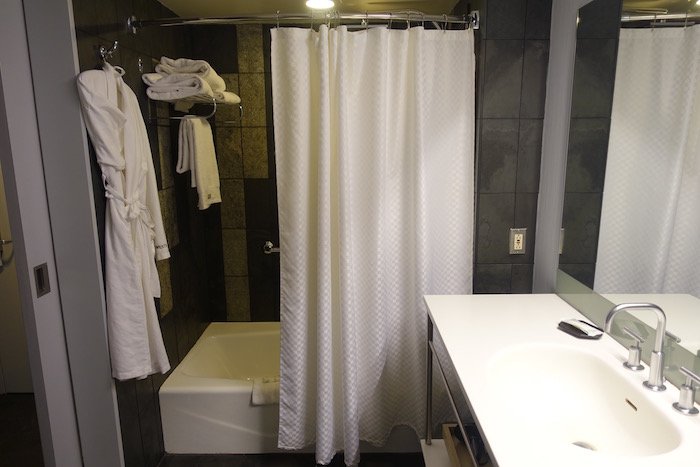 I appreciated that the shower had the brand standard rainforest shower head, as well as a handheld shower head. 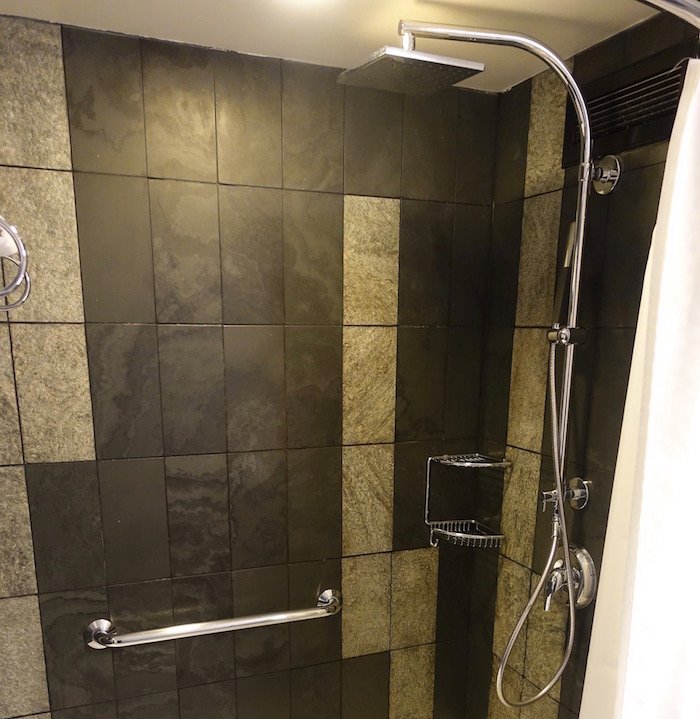 I’m not sure if the toiletries just weren’t the brand standard, or if Westin recently changed the packaging on their toiletries — I suspect the latter. Regardless, I found the quality of them to be pretty good. 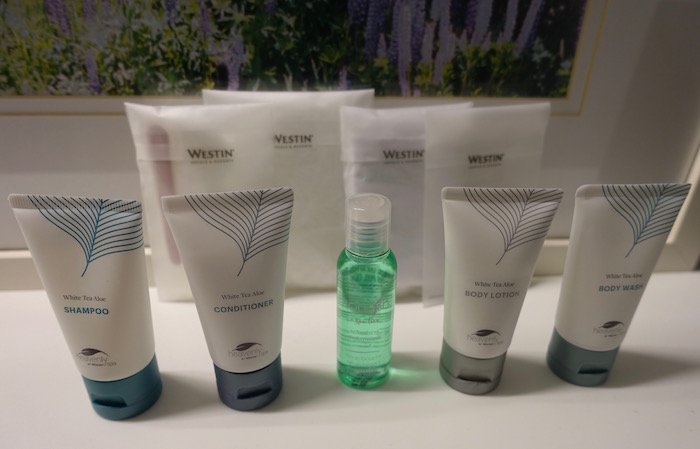 It’s a solid breakfast buffet, so I’d say this is among the best SPG Platinum breakfast amenities in the whole city.

Starwood has dozens of hotels in New York City, so there are a lot of properties to choose from. In general the Westin Times Square wouldn’t be my go to hotel, simply because of its location. That being said, I stay here once a year, and I’m happy to see it’s improving. The redesigned grand deluxe rooms at this hotel are gorgeous, and this hotel has the best Platinum breakfast benefit of any SPG property I’ve been to in New York City.

Stay tuned, because in the next post I’ll cover my experience at the SPG Amex cardmember event.

Do you have a favorite SPG property in New York City?

I find nothing special about the room at all. Weird review.

It does look like a cheap motel from the pictures. 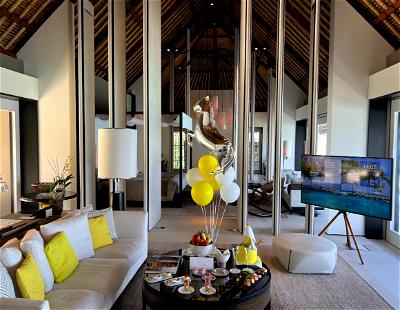 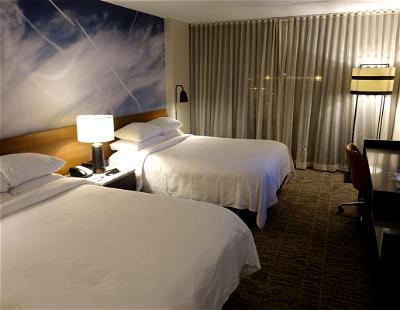