I’ve been fascinated by what has been going on at United the past year or so. United’s stock is on fire (it has gone up about 50% over the past 12 months, in stark contrast to American’s stock), following what was no doubt a low point a couple of years ago.

I find it quite surprising how well United has been able to do, given what an odd couple Oscar Munoz and Scott Kirby are:

On one hand, United seems to be focused on the premium product. On the other hand, United has the most restrictive basic economy fares of the “big three,” and they’re not relenting. So their strategy is confusing, but seems to work.

With that in mind, United has just announced a huge push towards becoming a more premium airline, as they plan to install an additional 1,600 first and business class seats throughout their fleet.

Here are the changes we can expect, broken down by aircraft type:

United’s fleet of 67 Airbus A319s will be reconfigured starting later this year, and all A319s should be reconfigured by the middle of 2020. With these changes, United is adding four first class seats. Here’s what this means for their overall seat count:

So as you can see, they’re adding four first class seats and removing six Economy Plus seats, meaning there’s a net decrease of only two seats per plane. 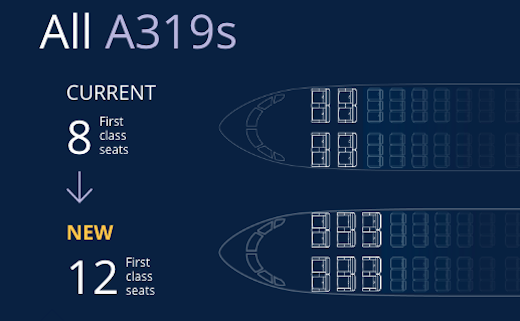 United’s fleet of 99 Airbus A320s will be reconfigured starting in early 2020, and all A320s should be reconfigured by the middle of 2020 (that’s a quick project). With these changes, United is adding four first class seats. Here’s what this means for their overall seat count:

So as you can see they’re adding four first class seats and removing three Economy Plus seats and one regular economy seat, meaning the seat count remains unchanged. 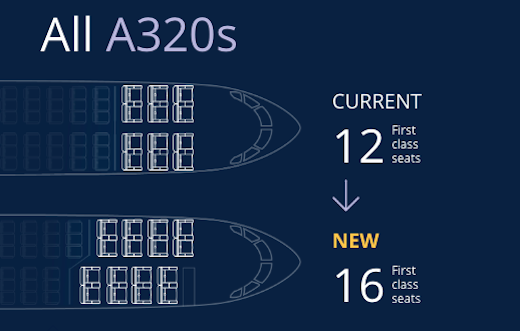 United Airlines has 50 CRJ550s on order. If that aircraft type doesn’t sound familiar, it’s because it’s a new type of plane.

The CRJ550 is essentially based on the fuselage of the CRJ700, which is a plane that usually has about 76 seats. However, United is going for a really premium configuration on these planes.

The CRJ550s will feature 10 first class seats, 20 Economy Plus seats, and only 20 regular economy seats. Furthermore, there will allegedly be a snack bar in first class, whatever that means.

They’ll also have four closets on the plane, so many passengers will be able to bring their carry-on bags onboard.

Now, I suspect that part of the motivation here also involves United’s scope clause with pilots. United is limited in terms of the number of regional jets they can have with over 50 seats, so getting a 76 seat regional jet and only installing 50 seats on it is seems to me like a workaround. They’re intentionally not configuring these efficiently, it seems, but will make the most of them by using them in premium markets. 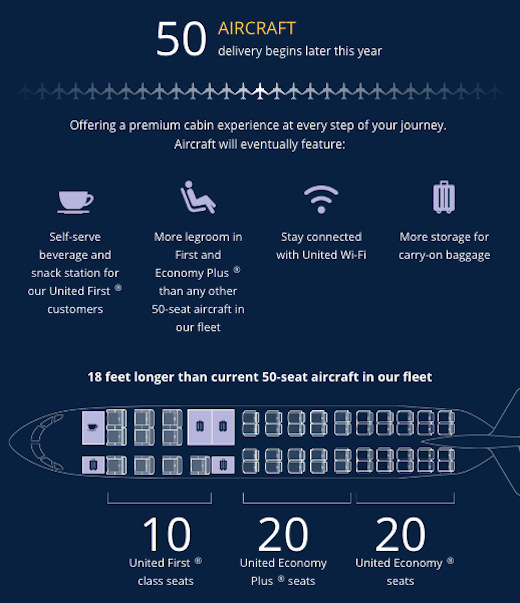 United is in the process of installing Polaris seats throughout their longhaul fleet. When it comes to their 767-300s, they’ve been reconfiguring planes in two phases:

Those second set of planes are expected to debut shortly, and all 767s should be reconfigured by the end of 2020.

What’s surprising is how they’ll be reconfiguring these planes. Rather than choosing the same layout as the other 767-300s with Polaris seats (which feature 30 business class seats and 184 economy seats), they’re choosing a much more premium configuration.

United will reconfigure a subset of their 767-300s with 46 Polaris seats, 22 Premium Plus seats, 47 Economy Plus seats, and just 52 economy seats. Here’s how that represents a change over the old configuration:

So net we’re seeing a capacity decrease of 47 seats, as they go from 214 seats to 167 seats. If these planes are used in the right markets, that could be pretty interesting. 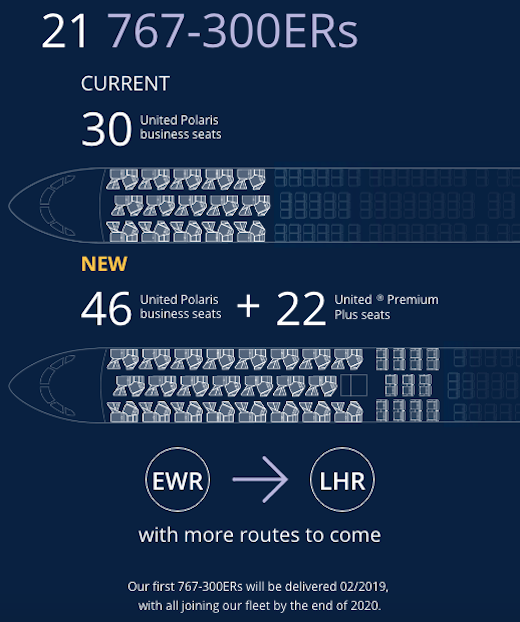 My take on United’s premium direction

First let me say that I think it’s really exciting to see an airline with a strategy. United has a plan, whether good or bad, and they’re executing on it. That’s in stark contrast to American, which seems to have no strategy at all.

But beyond that, I actually think United’s strategy is really smart here:

Some might say “well good luck to United during the next economic downturn.” While they’ll no doubt be in trouble with those 767s if/when there’s a major downturn, the reality is they would be in trouble no matter what.

Even when times are good, we are seeing roundtrip economy fares from the US to Europe for $500 or less. That’s no way to make money. So they’re in trouble no matter what if there’s a big downturn, regardless of whether they have a lot of premium capacity, or a lot of economy capacity.

Well done, United! It’s refreshing to see an airline other than Delta leading the way for something for once.

What do you make of United’s new premium direction?

Agree with Janet. Flying with United since the merger 11-12 times/year from LAX - HNL. Never a lost luggage or major issues that we can not live with. 1K flyers and do not plan on changing since United offers more to us than Hawaiian which we flew before. We all have different expectations. Most of our flights are on 777-200 or 757-200 with full flat seats.

I think the focus on premium will turn out to be a good thing. More premium seats (assuming of course they allow more availability to upgraders) means more chance to score an upgrade if you are a frequent flier of theirs. This, as opposed to AA, which is cutting capacity and has a decided LACK of award availability.

Oh and for the record, I suggested as “compensation” for the broken seat that I at least be given back the upgrade certificate I used to get into First, with extended expiry date and a guararanteed shot to actually use it (because we all know what AA upgrade availability is like). Seemed more than fair to me, even for a stingy airline like AA. Didn’t happen.